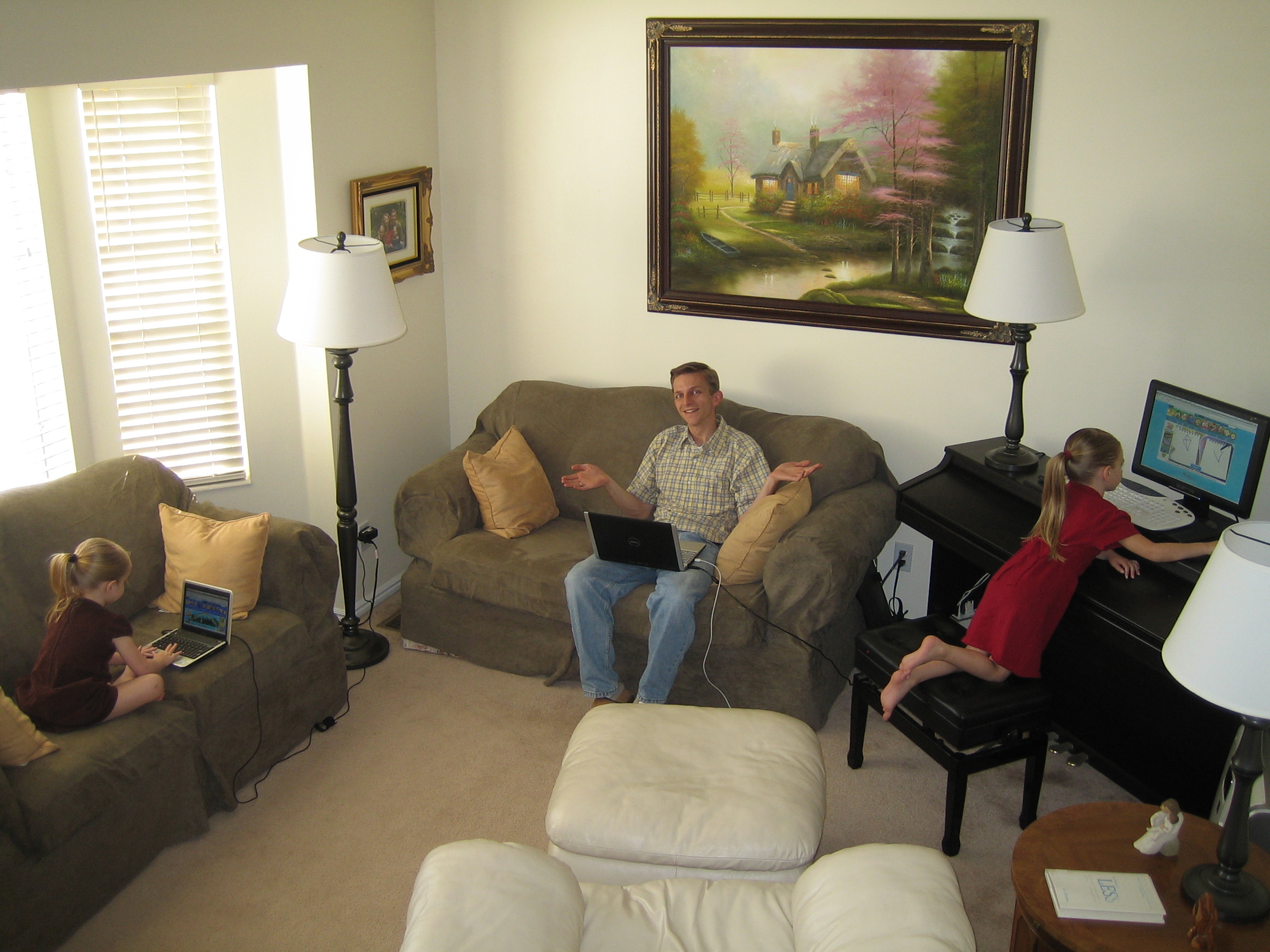 Jen took a few pictures recently of a humorous, yet still somewhat typical scene in our home – every one of us on our own computer.

Yes, I’m a nerd, and I’m sure my children will become nerds also (“cool nerds”, of course). :) Even my wife is more nerdy now that we’ve been married almost seven years! Long live computer nerds! Hey, at least we’re in the same room, right?

Marie playing chess, and Emily on the piano

Emily and Marie both love playing computer games. In this scene, Emily is trying out a new program to help her learn how to play the piano. It’s kind of like Guitar Hero, but for piano, and it actually teaches you how to play – it’s fun and educational. Impressively, she was able to learn in about a half-hour, how to play middle c, middle e, quarter notes, half-notes, and whole notes on a grand staff, and I didn’t have to teach her much at all! She had a blast trying to beat her score. The program is called Piano Marvel, and was developed by a friend of mine in Colorado. If you want check it out, you can get a free trial and a 20% discount when you sign up by using the code: 3EEED31A. Or just go here.

Here, Marie is playing chess with herself on the little computer. Not that she really knows how to play chess, but she likes to move the pieces around and see how many she can “kill”. So I guess she’s at least learning how the pieces move.

I think she wouldn’t have been interested in it at all had we not played yard chess in Boquete, Panama. So I’m glad we did that. Chess is pretty nerdy, too, isn’t it?

In the top picture, I’m probably working or checking e-mail or something. I’m on the computer a lot, either upstairs with everybody, or down in my office, or on my iPhone. I’m trying to use it less, but computers are just so useful and so much fun! :D

Jen is the only one not shown here, and this is obviously because she’s the one taking the pictures. But you’ll often find her reading blogs, searching for new recipes, or looking up something on-line.

Not only are we a computer nerd herd, but I’m also a word nerd, and on Saturday morning, I woke up with a great new joke! Ready?

Question: What do you call a cookware salesman who’s not making any sales?

The Why of Happiness

Do you want a portable piano?