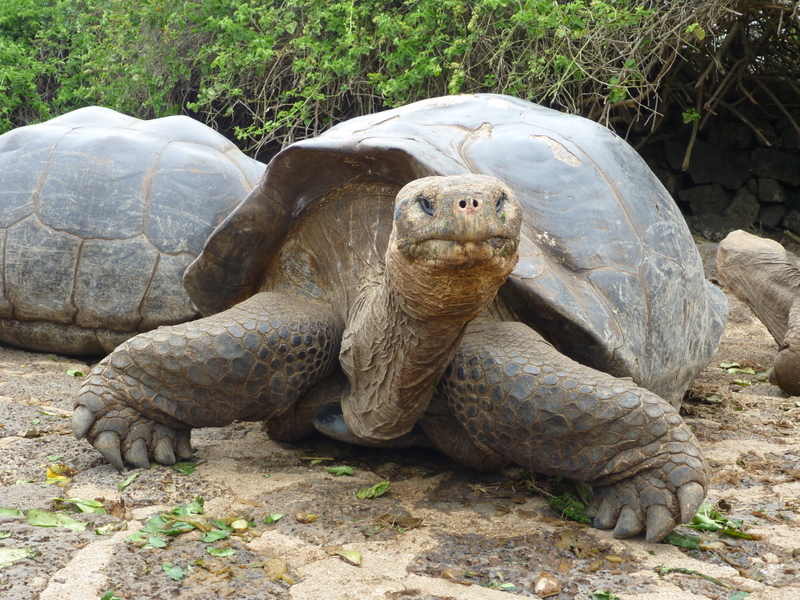 A Week in the Galapagos Islands 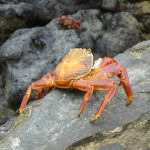 The Galapagos Islands, just off the coast of Ecuador, provide some of the most unique wildlife viewing experiences in the world. The animals here evolved without humans attacking them, and therefore they have no fear of us. It’s been incredible being able to walk up to a sea lion, marine iguana, or heron, and have it not run, fly, or swim away.

We read in several places that a cruise is the best way to do Galapagos. They have 4, 5, and 8-day cruises in boats of several sizes that take you to the different islands. However, we booked our flight without thinking much about cruises, and didn’t realize until later that most don’t cater to young children. Many boats won’t even allow children under 6 on board. They are also ridiculously expensive, like $2,000/week per person expensive (or more)! Because of all this, and Emily and my problem with motion sickness, we decided to stay on the land and just do day trips as we felt like it; and we were sure glad we did! 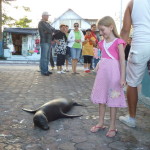 We stayed on the most populated island of Santa Cruz, in the town of Puerto Ayora. It turns out you can see just about all the different kinds of animals in Galapagos within a short walk from the town. Many times just walking down the main road, we’d look over the side into the ocean, and see marine iguanas, sally light-foot crabs, and sea lions! One day, we passed an area where fisherman were cutting up the day’s catch, and I suppose it was the smell that attracted dozens of pelicans, sea lions, and other animals to the scene all trying to get a piece of the meat. (And some were better thieves than others!)

The temperature is a little variant. When the sun is out and the wind isn’t blowing, it can get quite hot, but with clouds and a breeze, it’s definitely coat weather. We wore our coats most places, but often had to carry them, which was sometimes a chore since we did a lot of walking. 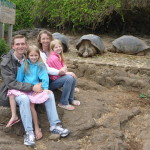 Our first day, we went to the Charles Darwin Research Center, about a 40 minute walk from town. There we saw several giant land tortoises, up so close you could kiss them (but we didn’t). They actually breed turtles there, and then release them back to the islands they came from once they’re able to take care of themselves, since most tortoises die in the wild when they’re young due to introduced predators. We even got to see the baby tortoises in different stages of development.

And if you like boobies, you won’t be disappointed with Galapagos. There are lots of beautiful boobies here! I’m of course referring to the blue-footed and red-footed boobies – unique birds that populate most of the islands. The color in their feet gets more vibrant as they get older.

There are a lot of great restaurants in Puerto Ayora, and more of Ecuador’s fantastic ice cream, which we enjoyed almost daily. Although since we’ve been in Ecuador, we’ve been at five different restaurants that were showing surgeries or other gruesome activities on the televisions – not the kind of thing I like to see when eating (or any time, really). I found that a bit odd. 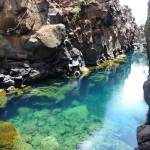 While most of our animal-seeing desires were met in Puerto Ayora, we did take a couple day trips. One was a bay tour around the port, where we saw more sea lions, marine iguanas, crabs, and also some sharks, sea turtles, and a manta ray. We also went on a short hike where we tasted fresh salt right out of a lake, and snorkeled in a beautiful, clear, natural pool.

The other day trip was to Isabela Island, a 2.5 hour boat ride each way, where we saw more of the above animals as well as flamingos, and some cool lava rock. Unfortunately, the ride was on much rougher waters, and after being on the boat for just 5 minutes, I couldn’t hold down my breakfast, and continued to vomit the rest of the way there. It was pure torture. Emily also threw up 5 times, and Marie twice. I really envy Jen who seemed to hardly get affected at all by motion sickness. The girls recovered well, but I was pretty sick all day, and even some the next day. It made me SO glad that we didn’t book an 8-day cruise! Not to mention the money we saved. I couldn’t feel too sorry for myself, though, because there was an older gentleman in our group who died of a heart attack while snorkeling near the end of the tour. It was pretty tragic, and his wife was of course devastated! My love went out to them as my world was spinning around me. 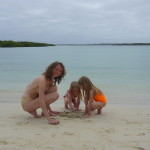 Playing in the sand

There is a beautiful beach on Santa Cruz island called Tortuga Bay. It’s about a 2km walk from town, and took us about an hour to get there on foot. The girls did very well, though. In fact, Marie ran most of the way. She quickly gets “tired” of walking, but if she can make a game of running (ie. race), it’s fun for her and she is full of energy. Funny how that works. The beach had the softest, whitest sand I’d ever seen – the texture was almost like flour. And the water was clear and turquoise. It was a bit cold to swim in, but we played on the beach for a while, building sand animals and watching the birds.

After being with my kids 24/7 for a month and a half now, I have to say how grateful I am for them. I love Marie’s sweet face. Her smiles and laughs really brighten my day, and I melt from her constantly telling me she loves me, even though I know I’m an imperfect daddy. Emily gives great hugs, is so understanding and curious, and expresses such concern for animals and people. They are both such sweet hearts and I love them so much. 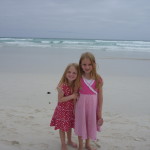 I did give them a good lecture one night about gratitude, though, prompted by some ungrateful comments. (When I asked how their day was, I only heard complaining.) With all that we have and are able to do, I don’t want to have ingratitude. I understand that sometimes we have bad days, but I believe being grateful is part of what brings happiness and increasing abundance in our lives. When you give a gift to someone, and the gift isn’t appreciated, it can make it less enjoyable to give to that person. Likewise, if we’re not grateful for what we have, we may soon find ourselves with even less to be grateful for. So now before bed each night, we’re each saying three things that we’re grateful for.

I hope you enjoy the photos and video below.

After a leafy meal

Playing in the sand

Jen and Marie with marine iguanas