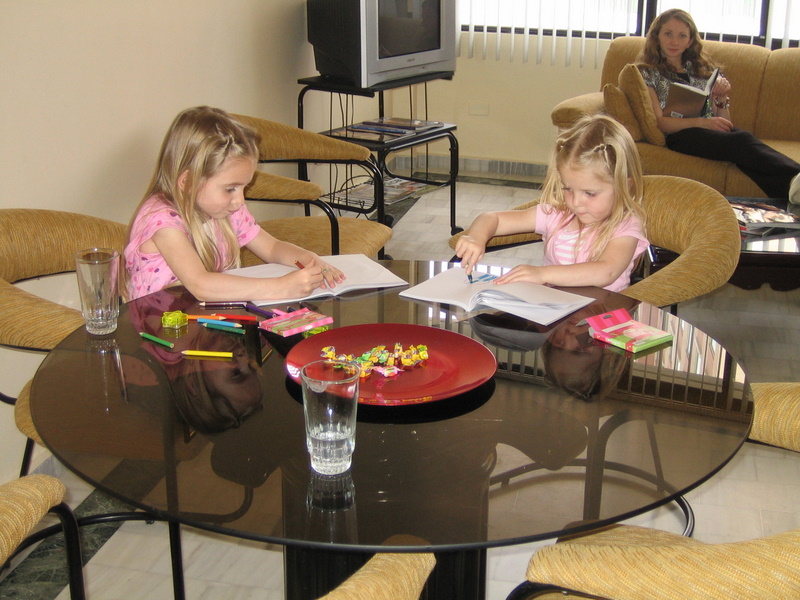 Jen reading in our apartment

It’s been a few days since my last post. The main reason for this is that our current hotel doesn’t have Internet access. Well, it does – you can either take the elevator to the computer room and use their computers, or you can pay $7 to get the Internet in your hotel room for a day. Since I needed to use my own laptop for programming reasons, I went to the Internet café at the corner once, but realized that $7 is really worth the convenience so I’m now paying to have it in our room.

So, we have left Balboa Inn and are now staying at Torres de Alba, a high-rise apartment/hotel building (13 floors). It’s a much different experience from Balboa Inn in both good and bad ways.

Relaxing in the apartment

First, our apartment is very spacious. It’s got one bedroom with the beds, a large living room and dining area, a bathroom with a large shower, and a full kitchen including a washer and dryer. It’s downtown so is within walking distance of several restaurants and shops. There’s a television in the room, and outside, a small playground and a swimming pool which I’ll tell you about later.

Brandon and the girls

On the downside, being downtown, Torres de Alba is very noisy! We are on the fifth floor and we hear constant honking, car alarms, loud music, and street noise. Panamanians love to honk! Every time one car passes another, they give a courtesy honk. Then there are the honks when people are frustrated, or in rage, etc. It’s rare that I can count for ten seconds and not hear a honk. So that’s a bit annoying. It’s also inconvenient to have to pay extra for the Internet, and that it’s not wireless. Our room also smelled a bit like smoke when we first got here, because of the previous occupant. So there are definitely some drawbacks.

Jen and the girls downtown

On Thursday, we explored the hotel, took a walk around the neighborhood, bought me another shirt and a pair of shorts (nice and long), and priced a number of salons to get us all a haircut ($5-10/person). We walked pretty far and it was getting late, so we ate at McDonald’s for dinner, which the girls had requested several times since our trip began. Unfortunately, they didn’t have a play area, but it was some good fast food.

On Friday (Feb 6), we slept in a bit, and then went out to breakfast at a restaurant just down the street from our hotel called Manolos, where the girls had pancakes, Jen had an omelette, and I had some cream of shrimp soup. It was a good and affordable restaurant.

We then went to the bank so I could make a deposit on a hotel for Boquete, and get some more cash. Then we looked at an All-a-dollar shop and got the girls some their own set of crayons (for Marie) and colored pencils (for Emily), and each their own pad of paper to color on. We also got them some cute hats, and a bag of candy. I love All-a-dollar!

Then we went to the grocery store to get some real food, since we now have a kitchen and can cook. We got some fruit, meat, bread, milk, eggs, and all that we’d need for food for the next few days, as

Jen in the kitchen

well as some swimming gear for the girls. We probably won’t need to eat out again until we leave Panama City, but we may once or twice. The leftover food (most of it) can go with us to our next place. We won’t be without a kitchen for the rest of our trip (except maybe once).

I have to say that as much as we like our large apartment and the privacy, we don’t care much for being downtown. The city is smellier, dirtier, noisier, and more crowded than in the quiet neighborhood where Balboa Inn was. It is nice that things are close enough to walk to, but we’d rather not go out much because of the reasons listed above. Well, we’ll only be here a couple more days, then it’s on to more quiet places. :)