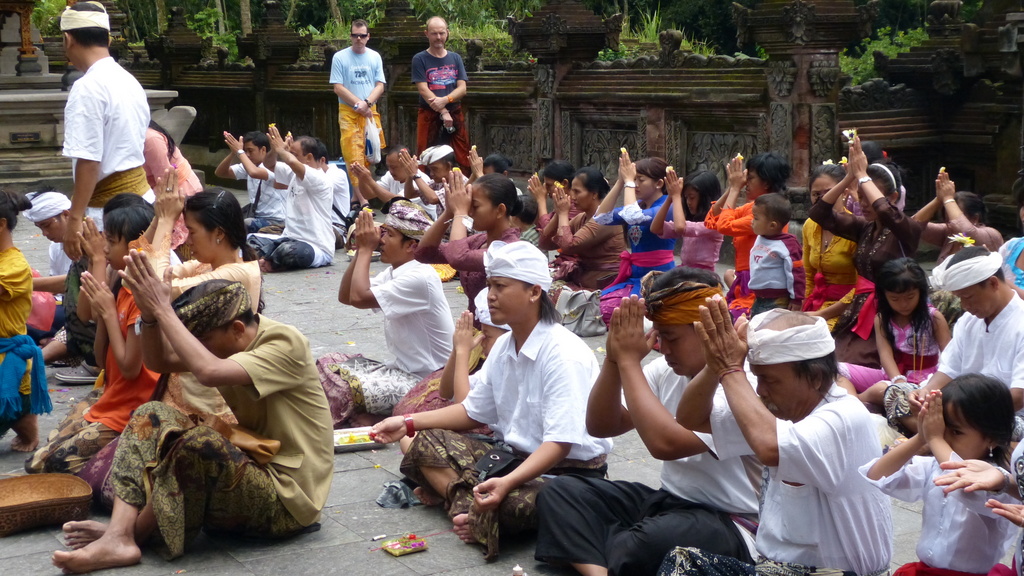 Bali is an island full of culture, especially in Ubud where we’re settling for at least the next year. Sometimes called “The land of a thousand temples,” Bali literally has tens of thousands of temples and shrines on the island, and most families even have their own temple within their housing complex, usually dedicated to their ancestors. With sacred offerings to the gods placed at the entrance of every doorway to every building (including homes and hotels), and each shrine requiring homage three times per day, you can’t go far in Bali without seeing its rich religious traditions practiced diligently by its people, always dressed in brightly colored sarongs, kebaya, and sashes (and hats for the men).

In fact, there are several shrines in the villa we’re staying at and each of them need to have offerings placed in front of it morning, mid-day, and evening. Fortunately, that service is included in the rent.

While Indonesia is a Muslim country, the island of Bali is predominantly Hindu, and its Balinese traditions have intermingled with Hindu and Buddhist traditions to produce a unique and beautiful culture found no where else in the world. With my mom here to visit us for a couple weeks, we’ve taken the opportunity to experience a taste of this culture, and have even participated in some sacred ceremonies.

Here is a brief summary of some of our cultural experiences over the past couple weeks.

Since we had an extra room in the villa, we invited my mom down to Bali for her birthday, and surprised her by arranging for Balinese dancers to come and perform some traditional dances, including a welcome flower dance, warrior dance, barong dance, and others, all accompanied by a gamelan orchestra. We also had some children from the neighborhood come and join us for the celebration and they sang “Happy Birthday” at the end to my mom. It was a really fun evening and interesting cultural experience. You can read about it in detail on my mom’s blog with pictures and videos.

We’ve also seen several ceremonial parades or processions while we’ve been here, some on the street right in front of our house. Dressed in their traditional clothes, the Balinese walk together to and from the local temple regularly for different ceremonies. The women often carry boxes full of offerings for the gods on their heads, and they are usually accompanied by musical instruments or chanting as they walk. Each temple has regular ceremonies and some families belong to multiple temples, so much time is spent in preparing for and participating in these rituals, which have much meaning for the Balinese. You can see deep devotion on some faces, joy on others, but also boredom on occasion. Still, it’s a wonderful sight not to be missed if you come to Bali.

One of our most moving, educational, and spiritual experiences was participating in the cleansing ritual Melukat, in the holy spring waters of the Tirta Empul Temple. We were led through the ritual by a smiling and devoted Hindu priest (Mangku) with a long beard and hearty laugh. We gave offerings, meditated, changed into sarongs, bathed and drank from spring water, and were blessed and cleansed in the temple as we let go of all the bad in our life. It was an amazing day that I won’t soon forget. And thanks to my mom, you can read a detailed account of the entire ritual here.

In addition to parades, we’ve visited some of the larger and more famous temples in Bali, including Tanah Lot, the temple that’s built out on a rock in the ocean that you can walk to during low-tide. And also Ulun Danu Temple in Bedugul, which looks similar to a Chinese pagoda on a serene lake.

We were also lucky to be in Bali for the Balinese New Year, or Nyepi. A few days before the new year, shrines from many temples get paraded down to the ocean where they are purified. Then, the day before the new year, the townspeople bring out their ogoh-ogoh (giant demonic monsters made of bamboo and paper) which they’ve spent weeks preparing, and parade them around the town to traditional music. That night, the monsters are burned, symbolizing the removal of all the negative and evil from our lives. The day that follows is a day of silence and self reflection. No lights or electricity are allowed. No one can leave their homes, except for the guards patrolling the streets to make sure people are following the rules. No working, pleasure, or traveling is allowed. Even the airport is closed for the day. If these rules are broken, it’s believed that it invites the evil spirits back in. It’s a quiet day that’s perfect for meditating, reconnecting with yourself or loved ones, or pondering the mysteries of the universe, which are some of my favorite past times anyway.

The hardest part for me was staying off the computer, but I’m glad I did as I was able to connect better to my offline world. The electricity and Internet actually went down for a while the following morning, too, so I was forced to continue the ritual longer than I would have preferred. But as long as it’s not too many days in a row, I think it would be good for me to have more Nyepi’s in my year.

Yes, there is an abundance of culture in Bali. It’s imbued through every level of their society, and is impossible to miss. I’m so glad that we’ve been able to not only see and learn about Bali, but also experience and participate in it ourselves, and meet some of its wonderful people. I’m still in love with Bali, and am excited to be spending an entire year here, once we get back from Japan in May. I hope you enjoy the video and photos below.