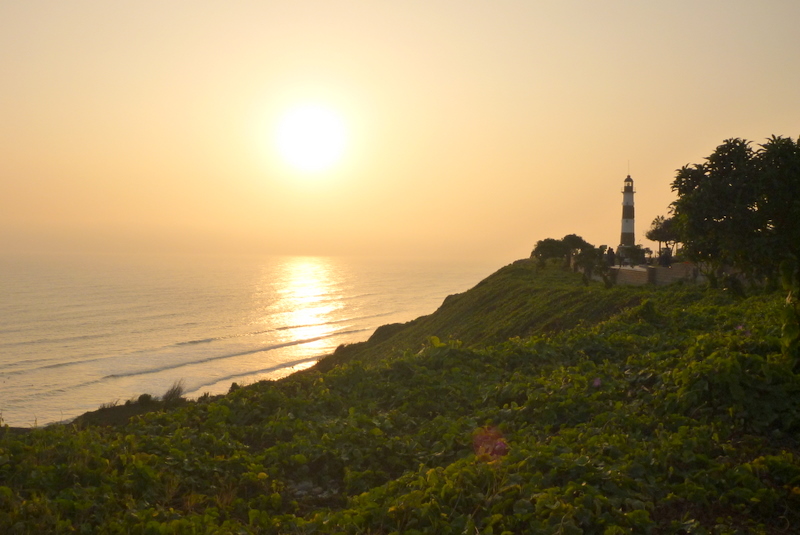 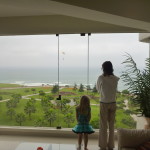 Lima rocks!! We flew in last Thursday and are staying in the Miraflores area, which we’re told is one of the nicest and safest parts of the city. And it’s easy to see why. Our apartment overlooks a lovely and very well-maintained park that follows the coastline for miles, providing a beautiful backdrop of ocean and greenery. The friendly tourist police are abundant, keeping order and offering assistance. Reassuringly, they are not dressed in militant garb like other countries we’ve been to, although there is some of this in other parts of the city.

Miraflores is a high class area, with many well-dressed people in tailored suits and polished shoes, but also genuinely smiling faces. Even the skateboarding teenagers look clean cut and friendly. It’s a social scene, with lots of families as well. The sidewalks are very wide and have plenty of room for bikers, joggers, and walkers to share. However, other parts of Lima are quite impoverished, with unemployment around 50%, so there is quite a gap here.

From our apartment window, you can also see para-gliders flying over the park, an opportunity we took advantage of ourselves. And it was a blast! The kids especially loved the feeling of flying. Personally, I got a little motion sick, but it was still amazing to soar gently over the tops of buildings and the green cliffs cascading down into the ocean. 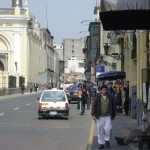 Get out of Miraflores to the other parts of Lima, and it’s still a clean, thriving metropolis with ancient ruins and museums, modern skyscrapers, Spanish colonial churches, beautiful parks, designer shopping centers, and fantastic food! Lima is the food capital of South America and home to a number of internationally acclaimed restaurants.

The scariest part is the driving. While the roads are well maintained and generally free of potholes, the drivers are asking for a death wish! You’ll regularly see two cars to a lane, each trying to push their way in front of the other, slamming their breaks just inches from impact. Drivers generally ignore the traffic police who are constantly blowing whistles. I am very glad we’re not driving here, but I have had to put a lot of faith in our taxi drivers.

Being winter, Lima is a little chilly this time of year. Temperatures range from 55-65 degrees Fahrenheit, so the first thing we did here was buy us each a coat. Once we took care of that we felt more comfortable enjoying other activities. The kids loved playing on the many playgrounds, which is where I saw for the first time a woman standing with an apron filled with children’s books. Kids were sprawled out on the grass and the benches reading books from this portable library. I don’t know how she gets paid or if she’s a volunteer, but I thought that was an excellent idea. 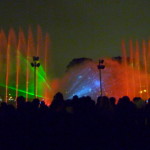 One evening we went to Parque de la Reserva, the largest fountain park in the world, containing many colorful fountains that dance to music. It’s a spectacular sight to see water move in such interesting ways. They also have a show where they project images onto a wall of water. Very cool! You can play in some of the fountains, too, and try to avoid getting wet in the process. Upon entering the park we were befriended by a very friendly and loud young adult who we later realized was quite drunk, and was drawing a lot of attention to himself. Tourist police to the rescue – he was quickly told to stop bugging us. I love the order here.

Not too far from Miraflores is an archeological site called Huaca Pucllana. We saw the ruins of an ancient pyramid built almost 2,000 years ago, which was made entirely from mud bricks. They worshipped the sea, sacrificed maidens, and ate their pet guinea pigs. They also had big pots with shark images painted on them, which they would break into pieces with a stone and put back together like a puzzle, to commemorate the start of a new building project. Makes you wonder how these traditions start, doesn’t it? I also wonder what people will think of our traditions in another 2000 years.

We’ve eaten at many fine restaurants here, all at a fraction of the cost of what you’d pay for similar caliber in the states. Everything from Peruvian, Chinese, Japanese, Italian, Brazilian and more can be found here at top quality, especially the seafood. One day after paragliding and a crazy taxi ride, I threw up my Chinese duck dinner 5 times and Emily and Marie were sick the next morning as well. 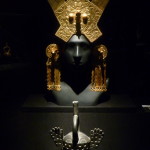 But since none of us really ate the same thing, we think this is due more to the yellow fever vaccination we received last week than to the food. It may have been helped along by our motion sickness, too. Fortunately, Jennifer was not affected at all, and was able take care of us all during our day of recovery in bed. Thank you, Jen!

On our last day in Lima, we went to Parque de las Leyendas (Park of the Legends), which is a huge zoo with animals from all over the world, including many interesting animals only found in Peru. It also has a botanical garden, and several archaeological sites from ancient Peruvian civilizations, complete with museums to display the artifacts, and also an interesting museum about mining and minerals, so it’s a pretty educational place as well. And for only about USD $2-3 per admission, it’s an incredible deal! After a long day of walking, the kids of course had rejuvenated energy for the playground, while Jen and I rested.

There were too many other little details and fun experiences to write about in this short post, so be sure to check out the video and pictures below to get a more complete picture of our time in Lima. Next stop: Cusco! We’ll be volunteering there for a week at a school. I’m really looking forward to it!

Jen and Marie in apartment in Lima

By lighthouse in Miraflores

Girls at the mall

Kids at park in Lima

Getting ready to paraglide

Marie in a fountain