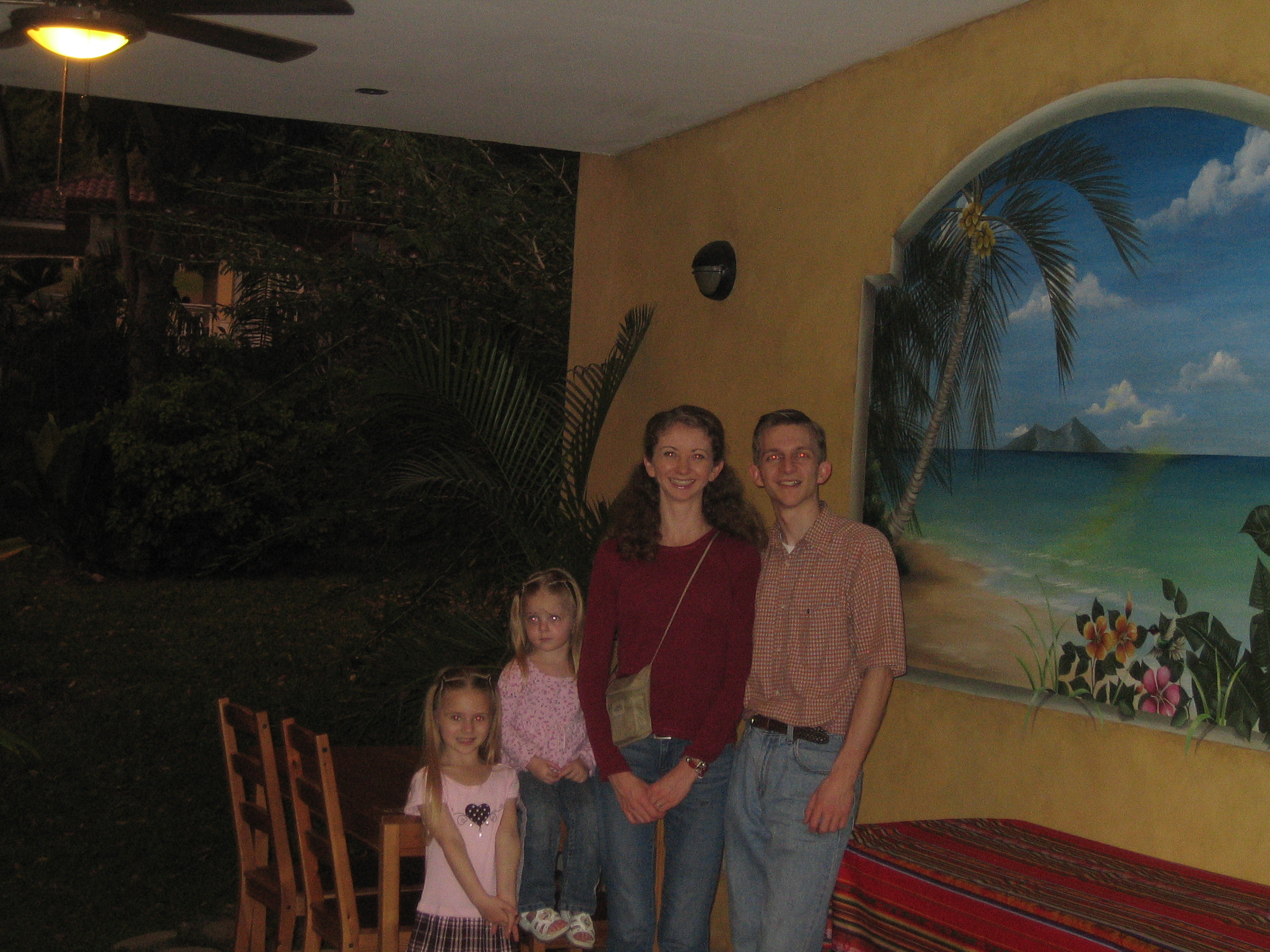 Biking on the Causeway

Today, I woke up about 7am, after about 11 hours of sleep, which seemed just about right with how much sleep we lost the night before. During my shower, I could hear pretty bird songs loud and clear, as there’s an open window in the bathroom. It was great! Once I got ready, I did my tai chi and a little standing yoga to get my body going.

Patio at Balboa Inn (at dusk)

The rest of my family was still in bed at this point, but breakfast was being served and I was hungry, so I went out to see what was going on. I had a nice bowl of some healthy-looking cereal, toast, and fresh pineapple and papaya – it was delicious! – along with some tasty fruit juice. It was fun looking out onto the garden and watching and hearing the birds.

I came back inside and Jen woke up asking what time it was. I got the girls dressed while Jen got ready, and we went outside and had breakfast together. I had some more fruit, and they also brought us out some scrambled eggs and sausage. Very nice.

After breakfast, the girls walked some more around the grounds, taking pictures with their little digital cameras we got them for Christmas. I brought out my laptop for a little work, while the girls sat next to me on the couch in the common area and watched “Blues Clues” in Spanish on the TV, and Jen took a shower.

A few minutes into it, we heard that there was a toucan sitting up in the tree in the backyard! I went out to look – it was beautiful, with a big long colored beak. I ran back to get my camera, but just as I came back, it hopped onto some higher limbs and I couldn’t get a good shot. But someone else told me they saw six the day before, so I guess it’s a pretty regular thing around here. I’m sure I’ll get another chance.

Biking on the Amador Causeway

Later in the morning we took a taxi to the Amador Causeway, where we rented a family bike (seats five!) and took a ride along the beautiful path that led to some small islands off the coast. The bike was very slow and had no gears, but it did allow us to enjoy the view (even though we were pretty sweaty).  We sang songs as we rode, and took a few stops along the way.

By the way, did you notice that the girls are in long sleeves in that picture? Do you remember me telling you it’s 90 degrees here and 50% humidity! And we’re biking?! Yes, they did it for fear of mosquitos, and probably for good reason, because I got two bites. But they only lasted a couple hours. I’d much rather have some breezes through my armpits, thank you. :)

A neat tree on the Causeway

We passed a number of great looking restaurants and shops on the Causeway, most of which were closed. It was about noon so we thought they’d be open for lunch, but it turns out that Panama is like many other countries in that lunch is a big meal in the early afternoon. The restaurants we saw didn’t open until 1pm. But we did find a gelato place open, so we each got a cup for about $1.50 each. We’ve seen a number of beautiful and unique trees here, and since I just love unique trees, I took a picture. Enjoy. :)

Once we returned the bikes, we had a real lunch at a nice restaurant overlooking the ocean. The kids each had a hot dog, and Jen and I had some soup. (Yes, hot soup on a hot day – but it was good). It was a fun restaurant for the girls, too – they were brought balloons and some delicious pink soda drink which tasted like bubble gum. We paid about $16 for the whole meal.

Jennifer and Emily eating at the Pencas Restaurant

Then we went back to our hotel and took a little nap. (Well, Emily and I just rested, but Jen and Marie slept.) During this time, we also saw an interesting animal outside our window, which I learned was called a “neque“.

We were planning on going out to the mall that night to see the city, etc., but Jen’s back started acting up, and it was getting dark, so we went to dinner at the same place we did the night before. The girls enjoyed climbing on the play area again as well.

Jen’s back really has been much better today, though – it just got tired toward the evening – so we’re hoping it will be even better tomorrow. My voice is also starting to get a bit better. Tomorrow, we’ll be visiting the Embera Indian village, which is supposed to be an all-day event. We’re looking forward to it!

(By the way, you can now click the pictures above to see a larger version.)