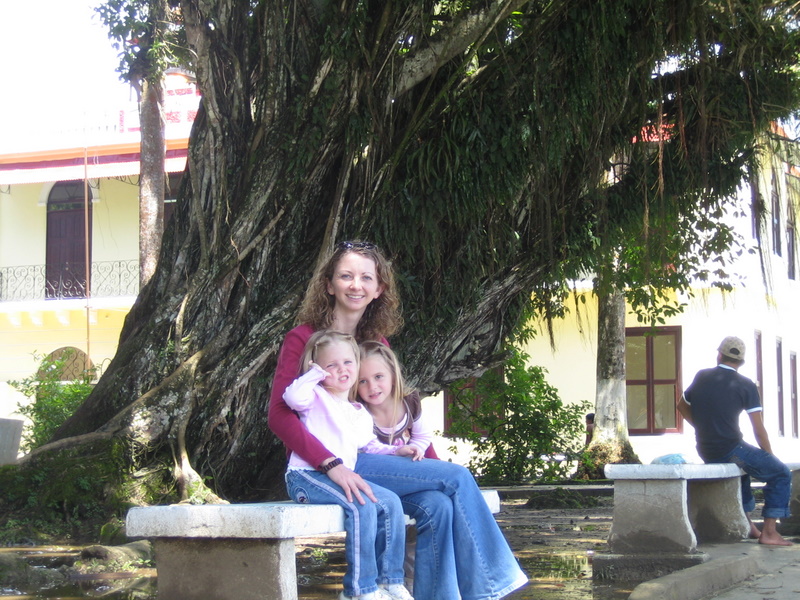 On Friday night, the waves were very high and crazy on the beach that night, spilling out over into the sand and making big puddles around our house. Along with the rain, the sound was almost deafening.

Probably because of the sounds, I had a dream that night that our house was carried away by a big river, and that once we got out, Marie walked to the edge of a cliff. I told her not to move, but she looked out over it and fell right off, fortunately bouncing off a couple people who were standing half-way down the cliff. When she hit bottom, she cried, so I knew she was alive. At that point, I woke up and was so glad it was just a dream. :)

On a park bench in Bocas Town

On Saturday, we decided to spend the day in Bocas Town, about a 30 minute boat ride from where we’re staying. It actually turned out to be a very sunny day, and it was really hot in Bocas. But we ate at a couple restaurants, which were decent, but pricier than most we’ve been to. They did have great fruit juices, though – lots of variety, including Sour Sop. We had some snacks, looked around the town, and even took a little boat ride up to Boca del Drago, which had a beautiful beach. The waves were very choppy though so it was a bumpy ride.

We had dinner in Bocas town, and on our way back home, we were joined by a woman who’s serving in the peace core in the little community we visited a few days earlier. It was interesting to hear of her experiences and how she’s been living and helping out the past nine months.

Sunday, we ended up not going to church because it was over an hour away by boat, and would have cost about $150 to get there. Plus, we didn’t know exactly where it was or even what time it started. So we just did some private study and reading. Here are some pictures from the past few days.

On a park bench in Bocas Town

Bugs, Birds, and Other Nearby Animals