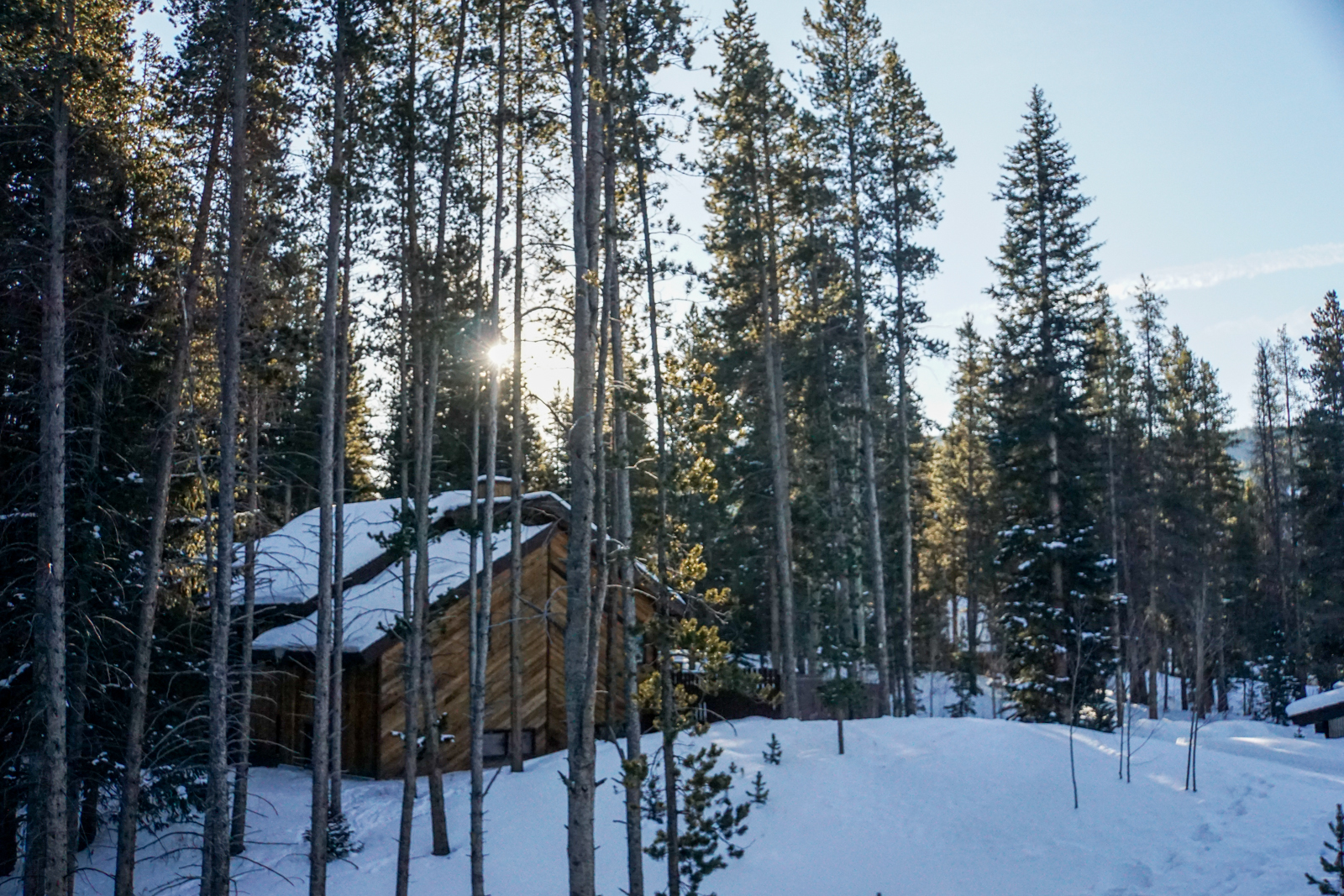 We thought we’d be extra adventurous this year, and trade our typical tropical climate for a brave escapade into an extremely harsh and frozen one. Our girls have been craving snow almost ever since we left it six years ago. To appease them, we decided to venture a ski vacation with Brandon’s Mom and sister Ashley’s family, over Christmas and the New Year. 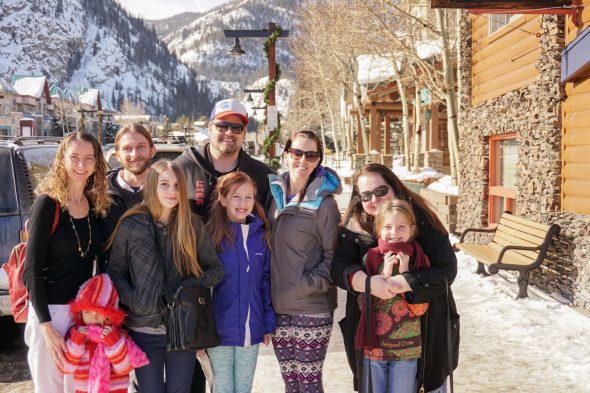 Little did we know we were also choosing the highest altitude (summit: 12,998 feet) ski resort in North America, at Breckenridge, in Colorado. We all felt shortness of breath due to the elevation. The climate is also very dry, which left our skin, noses, eyes, and throats feeling rather parched.

It is a cute town, with an extensive and quaint main street. We didn’t explore it as much as we’d have liked, mostly due to the fact that we didn’t want to wander around outside in the cold temperatures. Cold phobic-ness strikes again. However, as we discovered this trip, there truly are some legitimate reasons for that. For example, Emily got a bit of light frostbite on her toes from just a short stint of waiting outside for Crepes Ala Cart on Christmas Eve, and Marie developed a mild but miserable case of hypothermia after being in our outdoor hot tub in the frigid -17°F temperatures. It took her a few days to recover. 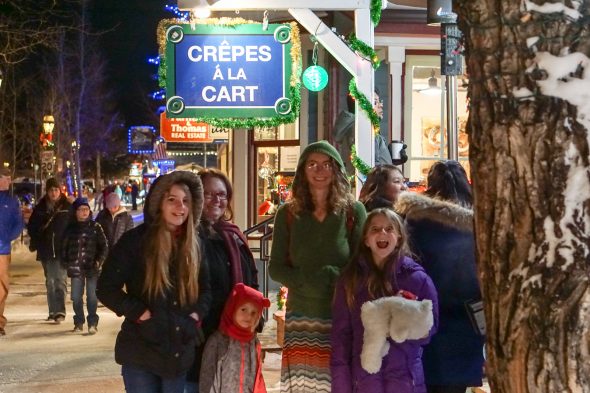 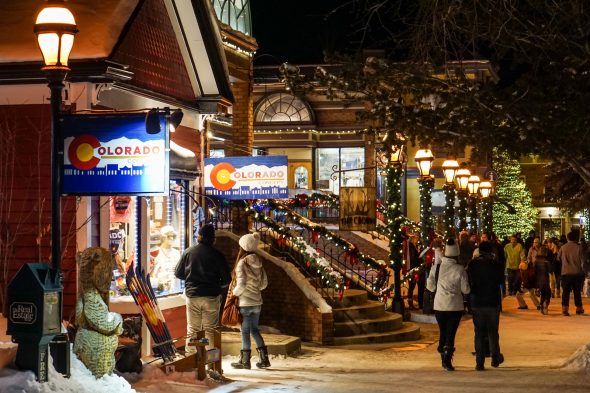 On a more positive note, our holiday home was beautiful and fully decorated, complete with a big, live Christmas tree hung with ornaments and lights. The cabin was moose themed, including an array of moose hats we could deck ourselves out with. There was a lot of land surrounding the cabin, with rolling hills and a thick layer of pristine snow just waiting to be played in, which was priority number one for our girls. So, first on the agenda was a romp in the snow with Grandma Alli and then some sledding with Brandon. 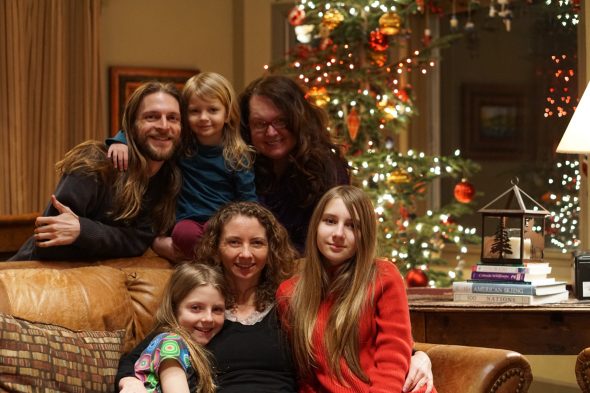 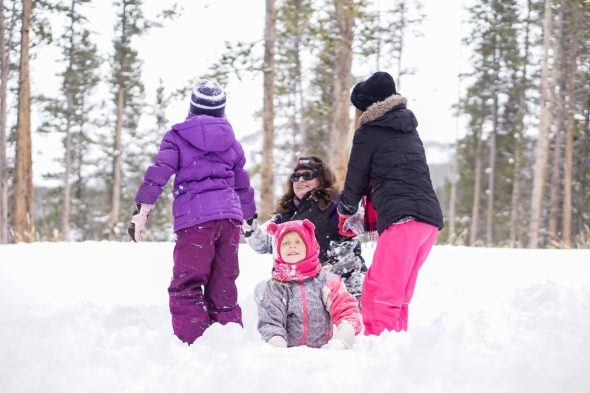 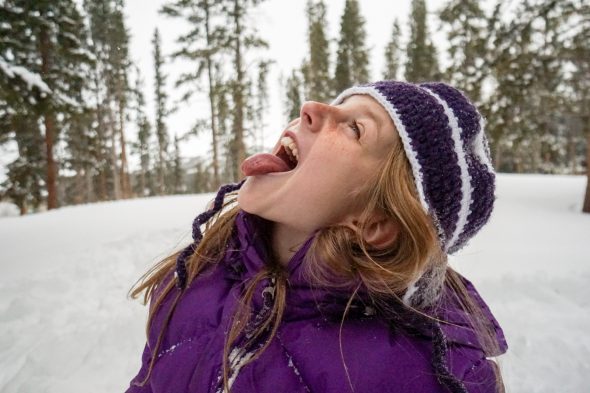 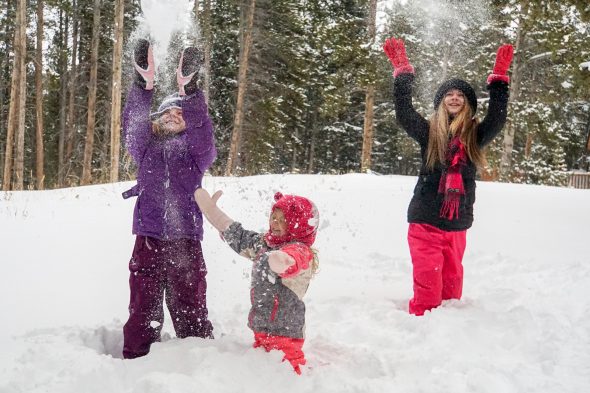 We had delicious breakfasts together such as oatmeal with berries, vanilla yogurt, white chocolate chips, cinnamon, granola, and honey. We even went to the effort of preparing a hearty pancakes, bacon, and eggs medley one morning.

Nostalgic family favorites were on the menu for dinners, such as taco soup, pasta, and chicken pillows with mashed potatoes, and desserts such as chocolate almond balls, Oreo truffles, caramel popcorn, and wassail. And a new favorite, Casey grilled up some monster hamburgers in the bitter cold that were the best I’d ever had. 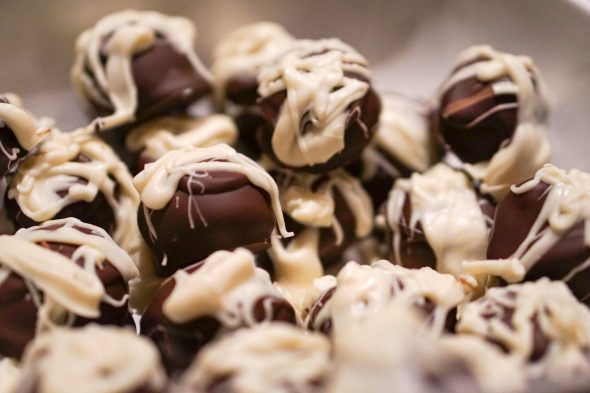 Grandma Alli taught us how to crochet, so we could help make scarves and hats for our sock snow people on our crafting night. As you can see, they turned out adorably.  Can you spot the superhero, red hijab woman, Santa Claus, and Frenchman? 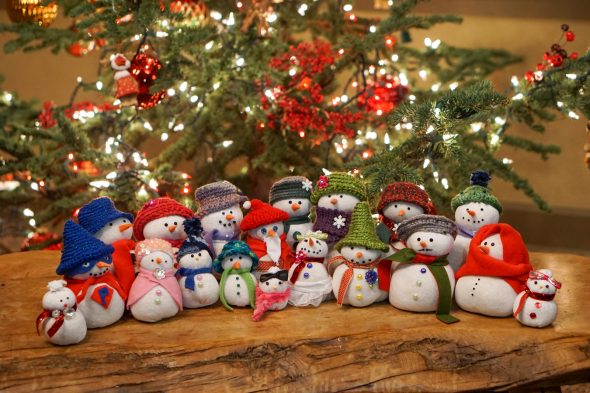 Santa even made a personal visit to our cabin in the woods one night, bringing along candy canes and exquisitely soft, fuzzy scarves to share with the girls. 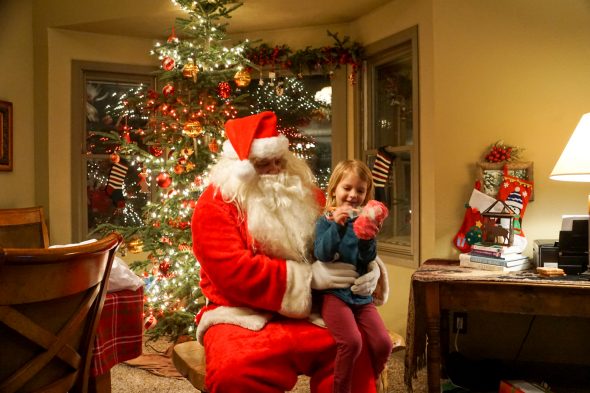 We enjoyed an extended family gift exchange one evening, which was a rare treat for us, since we’re usually far away from family during the holidays. The most exciting surprise for us all, was when Ashley and Casey announced they are expecting their very own “Pricelette” baby, due to arrive at the end of July! 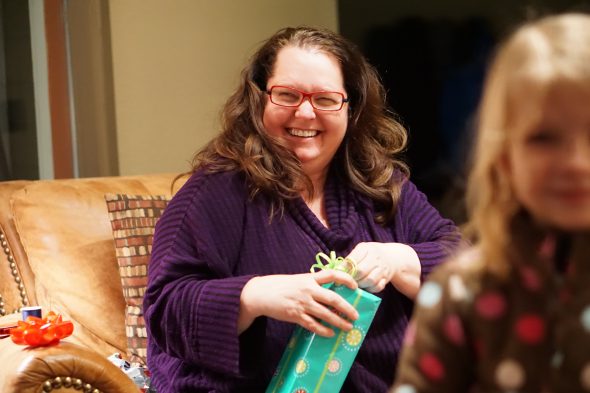 We did our traditional New Year ceremony together of releasing the old and welcoming the new, while sipping some fancy champagne and sparkling cider.

We watched a couple holiday shows, but mostly we focused on our big Star Wars movie-a-thon, viewing all six episodes from the comfort of our cozy cabin. We then went to see episode seven in a historic building which was renovated last year to become the Speakeasy Theatre in Breckenridge.

We had plenty of sunny weather ski days to play around with. Brandon and the girls tackled a full day of snowboard and ski lessons, respectively. I took this opportunity to have an indulgently blissful selfie-date. I skied Peak 9 in rhythm with my own flow for hours of fun, my first time on the slopes in over 10 years! I enjoyed a delicious lunch at The Overlook Restaurant perched on the ski hill at 11,274 feet. I met and conversed with many interesting people in the chair lifts on my way up the mountain.  The snow was top-notch, the scenery breathtaking, the runs excellent, and the service at Breck Sports rental shop was so friendly, convenient, and helpful. What more could a girl ask for? 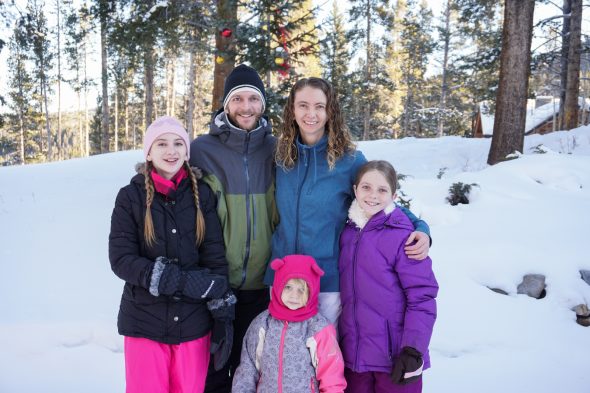 The next day, Aysia, Emily and I went skiing with Casey, Ashley, and Kennedy. Thank goodness Casey was there to help Aysia down the mountain, because she seemed to have forgotten everything she learned in her lesson the day before. Emily was more nervous than she expected on the ski hill as well, so Ashley and I worked on building her confidence while we coached her down to the bottom. 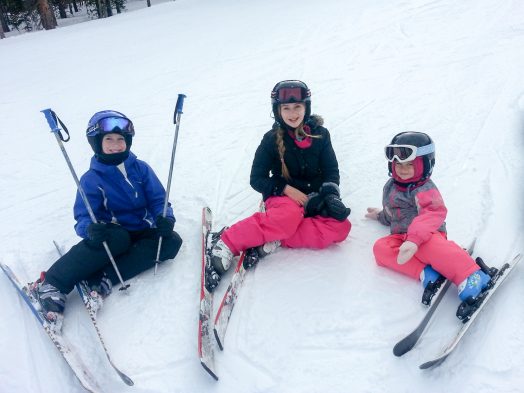 We had a couples skiing date the day after, where Brandon, surprisingly, tried his luck at skiing. After my disastrous attempt to teach him many years ago, I thought he’d completely given up on the idea. This time we had Casey to help instruct, and Brandon took off like a pro! Thank you also to Ashley for her fabulous video coverage of the momentous event. We were all really impressed, especially since Brandon was still pretty sore from his snowboard lesson a couple days earlier. While we skied, the girls stayed home with Grandma Alli and did things like sledding and building snow forts. On New Year’s Day, Ashley and I unwound on a sisters ski date as well, which we both really appreciated. 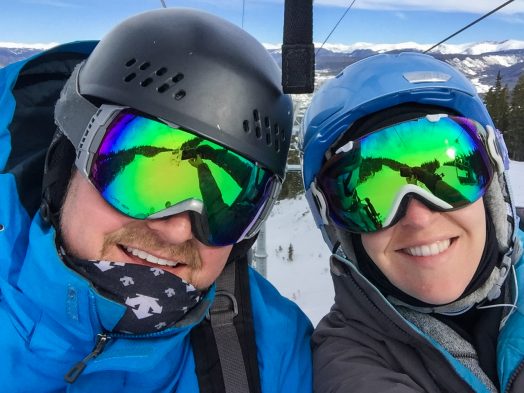 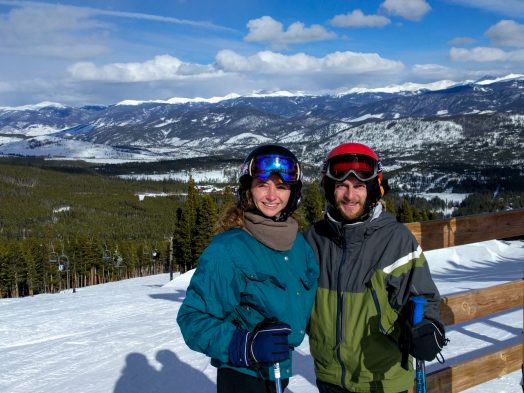 There’s nothing quite like a cozy, bonding holiday with some of our very favorite people, especially those we just can’t seem to get enough of. We laughed, cried, healed, helped, played, shared, loved, relaxed, and worked side by side in ways that made beautiful memories we will treasure forever. Mishaps and all, it certainly doesn’t get much better than that. Those kinds of loving, whole-hearted connections are what make my life worth living. It was certainly our girls’ favorite holiday celebration yet! Be sure to check out Brandon’s video at the bottom of this post, it’s really heart-warming.

The second day of January found us all eating a first-rate farewell breakfast in Frisco at the Log Cabin Cafe, before it became time to go our separate ways. Flying out of the Denver airport, we were sad to say goodbye to our amazing family, but looking forward to a change from the combination of dry, cold, thin air. As it turned out, Breckenridge is the exact polar opposite of where we were headed next. Stay tuned for our Fijian adventures, coming up soon! 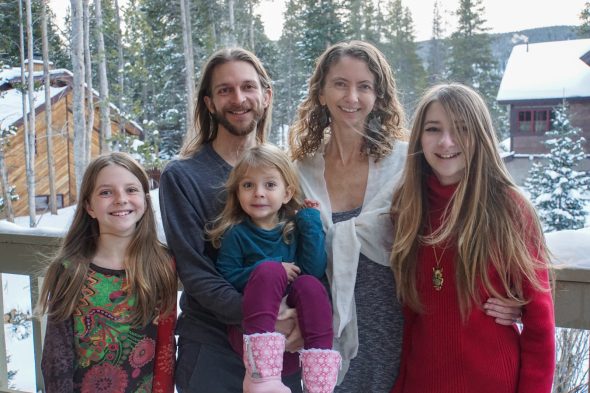 There is a lot of preparation that goes into these kinds of holiday celebrations, from travel planning, activities, and warm weather gear collecting, to gift shopping, menu creation, and food preparation. For myself, I find that building habits of mindfulness and presence are a priceless part of my own efforts. Tuning into a focus of thoroughly appreciating and absorbing these special times is what really brings them to life for me, in the most satisfying and meaningful ways. As an added bonus, the positive reflections I come away with just keep on giving. 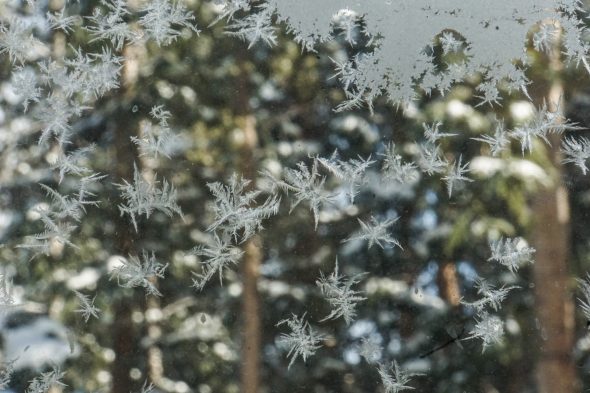 We definitely had some challenges thrown into the mix, some of which I’ve outlined in this post. But as we all know, having only positive experiences isn’t what life is all about. How we view and what we do with all of our experiences, both positive and negative, is what really makes the difference. I find that the whole tapestry of emotions, fully felt, is such a beautiful work of art. It provides a deep well of experience, integration, and understanding for me to draw from.

What are some of your most appreciated moments from this past holiday season? We’d love to hear your thoughts in the comments.