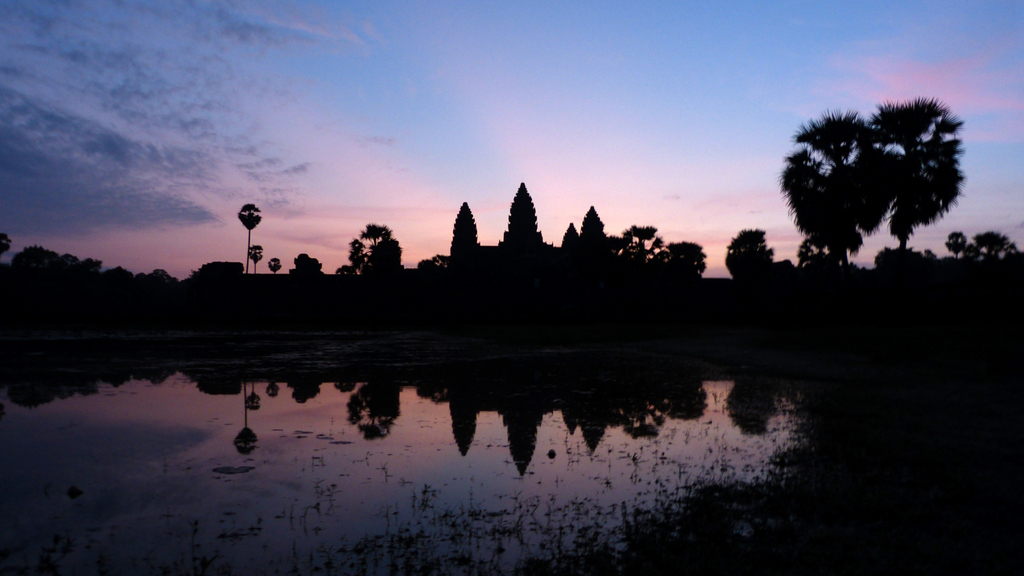 When we booked our tickets to Siem Reap, Cambodia, we had no idea that we’d end up arriving the day before some friends of ours would be leaving. We first met Denny & Rachelle in Costa Rica, we visited them again in the Philippines, and now by chance, through a post we almost missed on Facebook, we found ourselves enjoying a few meals together in Cambodia.

Of course, the reason most people come to Cambodia is to see the amazing ruins of Angkor Wat. This is not a single temple site, but a series of temple ruins, some more than 1,000 years old, spread out over many miles. Some are large and grand, some are small, some have been all but eaten by the jungle, or destroyed by wars and looters, and some are quite well preserved or restored with intricate and beautiful carvings. I took many pictures and videos which you can see below. Here are a few of my favorites.

While in Seam Riep, we also toured a silk farm, where we saw the mulberry bushes used to feed the silk worms, how the silk worms are raised, and how their cocoons are used to make silk strands, which are then dyed and woven into a variety of fabrics.

The town of Siem Reap itself was a bit dirty, and while the tuk-tuk drivers were friendly and respectful, they were so numerous that it seemed every five steps we were asked if we wanted a ride. Fortunately, the town does have plenty of good food options at decent prices, and several markets running day and night to satisfy any shopping cravings. I was surprised that USD is the currency used most often there, but small change (under $1) is given in riel bills instead of US coins.

While there, we also enjoyed relaxing and swimming at the hotel, visiting the museum (although we were annoyed they wouldn’t let us bring water or any bags with us — but using the baby and a soar throat as our excuse, they eventually gave in to the water), and playing computer games with the kids. They’ve also started doing some homeschool via Minecraft which they’ve been really excited about.

Here’s the video I compiled of our time in Cambodia, and more pictures below.