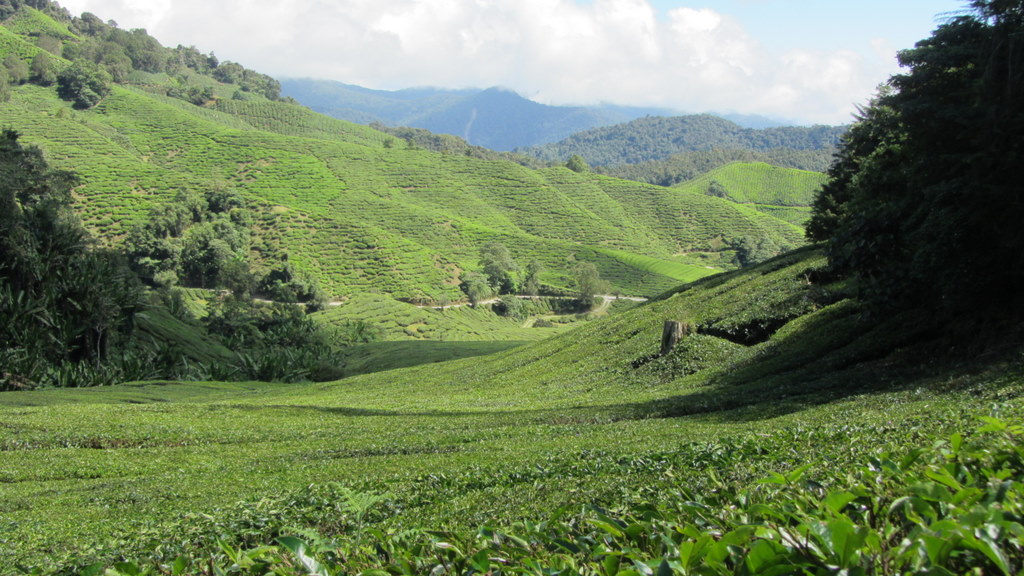 We recently left Penang, Malaysia for Kuala Lumpur — about five hours away by car — and we’re loving it here! But on the way, we took a short trip to the Cameron Highlands, Ipoh, and also visited Orang Utan Island rehabilitation center to view some of our closer primate relatives.

Our first stop was Orang Utan island, in the middle of a large lake, where some of the last of this amazing animal are being protected. In the Malay language, orang means person, and utan means forest. These forest people are even more intelligent and human-like than I expected. For example, I saw an orangutan pick up a long stick and put it through a fence to draw a piece of fruit closer to him. I also saw him use it as a weapon to hit his friend when he tried to take the fruit for himself. The babies in diapers were especially cute.

We then drove to the Cameron Highlands, a mountain town at the end of a very winding road, first settled by the British in the early 1900’s. We hadn’t booked a hotel in advance and just thought we’d look around once we got there, but we all felt so exhausted and car sick from the drive, that all we wanted to do was rest at a nice place. After the first hotel we checked was closed, we gave up looking and settled on the Heritage Hotel, which was fortunately a lovely hotel with a large room, beautiful views out the window, and a great dinner and breakfast buffet, for $115/night.

The Cameron Highlands has many farms, and the next day we toured a tea plantation, a strawberry farm, and a bee farm. The tea plantation was an especially beautiful sight to behold, with rolling hills of tea plants, and we learned a lot about how the crops are farmed. There are other things to do in the Cameron Highlands, and we enjoyed the cooler temperatures, but because it made us so sick to drive anywhere on the winding roads, we decided we’d had enough, and drove back to the town of Ipoh at the bottom of the mountain to spend the night.

We were really impressed with Ipoh. It’s a clean and spacious city surrounded by jagged limestone mountains covered in foliage. The size and overall feel of the city reminded me a lot of Salt Lake City, where we grew up.

The next day, before leaving Ipoh, we walked around an impressive temple we passed the day before that was built right into the side of the mountain cave, called Ling Sen Tong. You can see more pictures in the gallery below.

From Penang to Cameron Highlands, to Kuala Lumpur, the drive was beautiful all the way, and we enjoyed the greenery, the mountains, and the clean and fast roads. There is a lot to love about Malaysia, and we’re glad to be exploring more of it. Here’s a little video and some photos we took along the way.