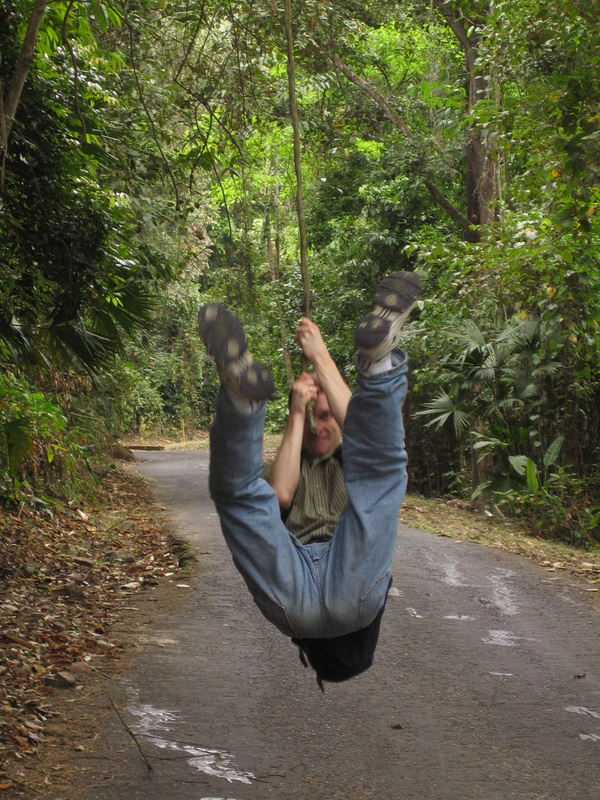 We got home late last night so I didn’t get a chance to blog, but we had so much fun yesterday! We slept in a bit, and had breakfast about 8:30 or so, in our pajamas. Then took a taxi to the top of a nearby hill, Cerro Ancón. There were great views of the city from up there, as well as of the Panama Canal. We could see the Miraflores locks, where we were the other day.

Brandon swinging on a vine

After looking around, we decided to take the one hour hike down the hill, on the paved rode, and I’m so glad we did. We were told you could sometimes see monkeys up there. We didn’t see any, but we did see some beautiful butterflies, birds, lots of cool trees, and a very fun hanging vine that I swung on like Tarzan! It was a blast! I helped the girls swing on it a bit, too. It’s amazing how the vine was hanging and wrapping around the different trees. I think it was natural, but it’s hard to be sure. I was amazed it could support my weight.

Emily and Marie at Mi Pueblito

At the bottom of the hill, we found a cute little village called “Mi Pueblito”, which is a modern replica of an old Panamanian town. There were some cute houses and shops, as well as some indigenous Indian huts. We took another little nature hike and saw a cute black frog with bright green spots, and a lizard with an orange head. I didn’t get a photo of the frog, but I did of the lizard. We also saw a trail of large ants, that was hundreds of feet long carrying food and leaves back to their home.

Also, at these villages, there were some flat areas, which the girls considered their “stage”, and they would spin around and dance while singing songs (mostly Christmas songs). It’s funny because they complained of being so tired of walking, and wanted to be carried, but as soon as they saw a “stage”, they would run to it and start dancing. It’s funny how that works…

Emily carrying our load of goods

By the time we got done looking at all these fun things is was 3:00pm and we were pretty hungry. We caught a taxi to the Mall, and had some food, rode on the merry-go-round again, and then did some shopping! While I wasn’t too impressed with the prices of toothpaste and laundry detergent that was imported from the US, the clothes here are extremely cheap! The average price for a shirt here looks like it’s about $4. I realized the first day I was here, that the two shirts I brought from home wouldn’t be enough, as I sweat in them regularly. I also wanted something a little more light weight, because of the heat.

So I bought a nice shirt with palm trees on it for $10 (the most expensive shirt I saw there). Jen got several shirts for $3-4 each, and the girls each got one for about $3. We also got Marie a pair of sunglasses for $2. (I wanted to replace mine that broke but couldn’t find one I liked). Jen tried on a few nice $8 swimming suits as well, but didn’t find one she liked.

One thing we’ve noticed in here that’s different in these stores is the mannequins, especially the female ones. Most of them have extremely large breasts. Notice in this picture, that they’re even bigger than her head! We thought that was pretty funny looking.

Emily and Marie with the Panamanian dancers

After we finished up at the mall, we went to a great restaurant called “Tinajas” where we had some typical Panamanian food, and watched a great music and dance performance. The food was wonderful. I had a yucca country pie (enriched with chicken corn, capers and Raisins). It was kind of like a pot pie, but more doughy. I liked it. Jen had a chicken pot tamale, which had corn, salsa, olives, tomatoes, and rice, and some other things. We both ate them all gone. The girls shared some pasta, and didn’t eat much. During one of their dance numbers, they even invited Jen to go up and dance with them! I got that on video, but didn’t get any good pictures. After dinner, the girls went up there to dance with some of the other kids. It was a really fun night.

Enjoy some more photos below:

Brandon swinging on a vine

Emily and Marie with the Panamanian dancers

A lizard with an orange head

Jen in a pretty courtyard

Emily carrying our load of goods

Brandon about to swing on a vine

Emily and Marie trying on sunglasses

Emily and Marie at Mi Pueblito