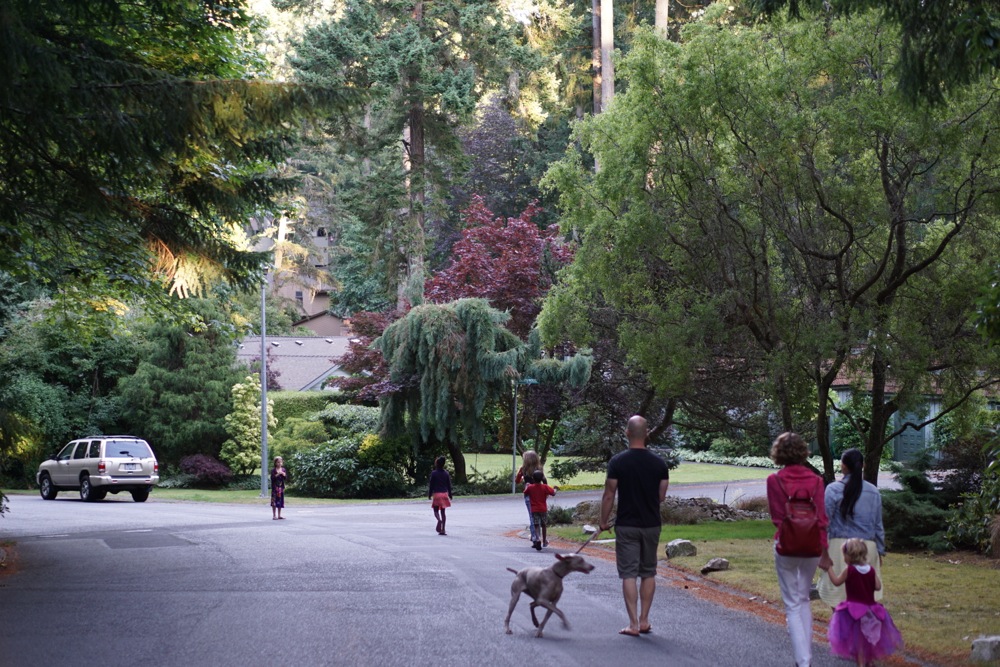 Crossing the border from the US to Canada was the most painless land border crossing ever. We didn’t even need to get out of our car. We just handed our passports to the man in the booth, answered 5 or 6 questions, and we were on our way. Such a contrast from those hectic Nicaragua border crossings!

Good thing too, because we were the second to last car on the ferry, and had it taken more than 2 minutes to cross the border, we might have missed the boat from Tsawwassen to Sidney on Vancouver Island. The ferry ride was beautiful! I’ll just let the pictures speak for themselves.

We also met a nice lady, Ireta, on the ferry who’s daughter owns an organic farm on Vancouver Island, and she invited us over for a visit that day. We toured their farm and ate some fresh fruits and vegetables from their garden (those tomatoes were like candy!) as we talked about homeschooling, the community in Victoria (and Vancouver where the mother used to live), life in Bali, and more. The kids watched the chickens, played in the tree house, and with the toys in their house. This family’s hospitality was a wonderful and unexpected introduction to Canada. She even gave us a parting gift of some world class brie cheese, which we enjoyed with some crackers the next night.

The weather that day was perfect! One thermometer said 30°C mid-day (86°F), but I think it was more like 26. It didn’t get below 20° (68°F) until 11pm. The rest of the days here have been cooler, and we have needed a jacket occasionally (especially along the coast where it’s windier) but most of the time, it’s been great. The fact that palm trees can grow there gives me some hope for even warmer weather in July and August.

After a short rest in our apartment, we left for downtown Victoria to check out the fireworks for Canada Day (July 1)! Victoria has an excellent bus system, and is quite walkable, but I didn’t feel like trying to figure it out as it was getting late and I didn’t have an Internet connection on my phone. So we drove the car, and after several loops around the center, we found plenty of (free) parking in a university library underground parking lot. The inner harbor was a beautiful setting, with the lights glowing on the water, and the surrounding buildings lit up in different colors. Thousands of people of all ages (although mostly young adults, it seemed) dressed in red and white. Several people even wore Canadian flags as capes. Music played, and the atmosphere was fun and celebratory.

It was pretty crowded, and not easy to get a good view of the fireworks, but people offered to make space for the kids and it worked out great. The fireworks display was enjoyable.

I have to say, we are definitely charmed by Victoria. This city is beautiful! Not only is it clean and well maintained, it looks like some love has been put into it. Many streets, including major ones, are lined by trees either on the sides or in the median. Landscaping and flowers are a constant sight. Many buildings have interesting or quaint architecture. Even the city’s electric boxes (or maybe they’re mailboxes?) have been turned into art pieces.

If you don’t feel like driving or bussing in Victoria, there are trails of beautifully forested bicycle and walking paths that weave throughout the city and neighborhoods, giving almost everyone easy access to the center, and because car traffic yields to these biking trails, it’s often just as fast to bike. Speaking of yielding, crossing the street has been a different experience here than we’re used to. Cars seem to somehow notice when we want to cross, and they actually stop for us! They even tend to go slow when approaching crosswalks. The courtesy is mind blowing. Definitely a pedestrian friendly place, and a stark contrast to places like Vietnam, where vehicles just drive around you as you walk across a street full of traffic.

By the way, if you ever need to use the loo while walking out and about downtown, you can always pop into a toilet like this one, placed in the middle of a sidewalk, clean and fully stocked with toilet paper and a hand wash with sanitizer, all free of charge.

Through an Internet contact, we met a wonderful family before we arrived who invited us to their house for a barbecue one evening. They live in one of the most beautiful neighborhoods I’ve ever seen! It’s 20 minutes from the center (by car or bike), in the Broadmead area, but it felt like we were in the middle of the forest! Most of the neighborhoods in Victoria have trees and lovely houses (although some could use more renovation than others), but in this neighborhood, the trees were not cut down to build the houses, and it also borders one of the largest nature parks in Victoria, with hiking and biking trails within steps of the homes. It was just lovely.

Lyndsey and Kevin have adopted two children from Ethiopia and spent several months in Africa during the adoption process, and we enjoyed hearing stories from their travels to Africa and other places. They also shared so much great information with us about Victoria and it seems we could have talked all night. Fortunately, we were able to get together with them again for breakfast once more before we left. Very sweet people, and we hope to see them again soon.

One of the main things we’re looking for in our second home base is better access to a good homeschooling community, and classes for the kids, including the arts. We were very pleased to discover that Victoria has it all. Hundreds of kids classes teaching everything from yoga and gymnastics, to musical theater and choirs, to survival camps and 3D animation workshops, and most of these have multiple options to choose from in each category, at various schedules. And there seem to be just as many opportunities for adults to continue their education, which I look forward to. Might be fun to join a choir again myself. Plenty to choose from…

Besides learning, Victoria has plenty to do for “fun”, from nature and outdoor activities, to museums, concerts, parks, gardens (including the world-famous Butchart Gardens), and more. Plus, most of what Vancouver island and northern Washington have to offer is less than an hour or two away. One evening, we stumbled upon a board game cafe that has hundreds of board games to choose from, and you can spend the evening (until midnight or 1am if you choose) playing these games for a flat fee of $5/adult, and $2.50/kids under 12. Lots of fun!

Oh, and the food! I thought the Central Market in Mill Creek, WA had a huge selection of healthy options, and it does. But The Market in Victoria definitely rivals it, and there are dozens of other health conscious food stores around the city and suburbs, some that only carry organic items, and there are several local markets as well.

And of course delicious restaurants abound in various cuisines, many focusing on locally sourced or organic produce.

So, obviously, we love Victoria, and are seriously considering planting some roots here.

There are some downsides, however. First, while the weather is great for 2 months of the year, the rest of the year it tends to be a little colder than we prefer (under 20°C). But it rarely gets to freezing, and so far we’ve enjoyed feeling the freshness of the morning air, and might not mind wearing a jacket and close toed shoes with socks for a little while during the colder months (we’d still probably avoid November to March).

The other disadvantage is price. This is not a cheap place to live! Three bedroom houses in Victoria start around $400,000, although sometimes you can find an older apartment or townhome in the $300,000 range. In neighborhoods like Broadmead, it’s hard to find anything under $500,000, and most places under $800,000 could use some renovation (and there are much more expensive parts of town). Rental prices seem to be between $1,500-$3,000/month for an unfurnished 3-4 bedroom house. We’re looking into the possibility of doing a home exchange for a couple months or more before we make any long-term commitments.

Restaurants are also rather expensive, and it’s not easy to find a plate of food for less than $10, and $20-40/plate is not uncommon. But most of the food is high quality and delicious, and the variety is outstanding. And often, the portions are large enough to share. We had Ethiopian food for lunch once, and the platters were large enough that we only needed two, so we ended up feeding our family for about $20, which is close to the price we pay in Ubud for a restaurant outing. Then again, breakfast the next day was almost $60 with the tip, so it depends on where you go. At least the water is free, unlike Italy which was often $4/bottle. I imagine we’d be eating out much less if we end up living here.

Of course, one major advantage for us if we choose to set up a home base in Victoria, is that my mom lives just a few hours away (or a 40 minute plane ride). Next stop, Vancouver.

Here’s a video and some pictures:

The Family Travel Event That Everyone Is Talking About!