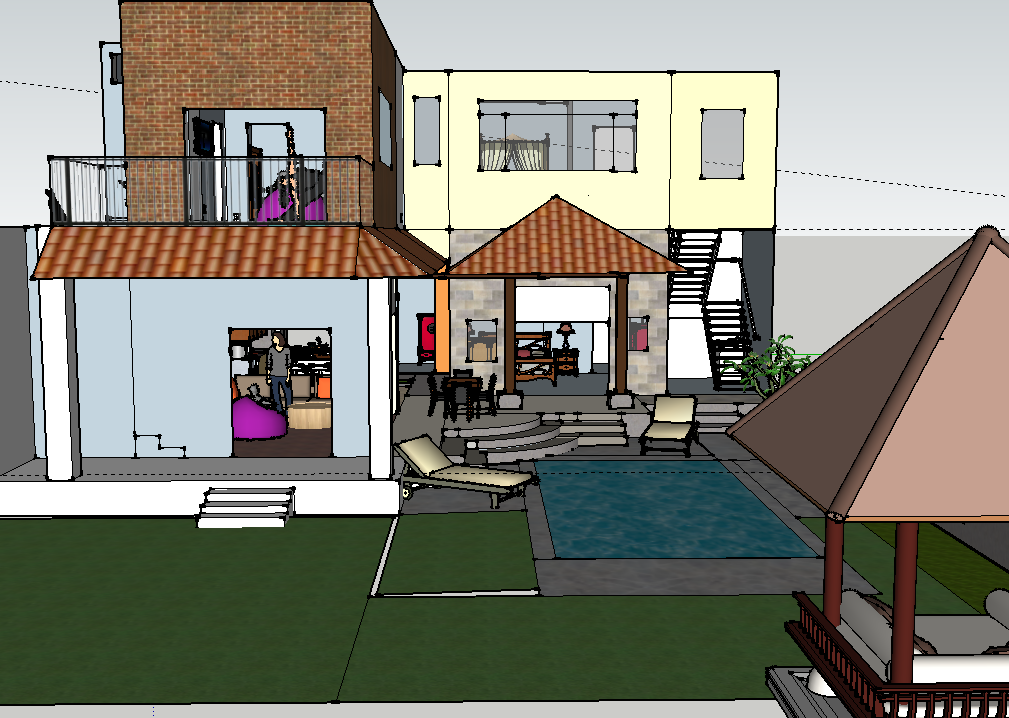 When we came back to Bali a few weeks ago, we really hit the ground running. We’ve been very busy, but also creative and productive, and have been enjoying our time immensely. Within one week, we found a house we wanted to live in. It’s a small 3-bedroom house near Ubud, but it’s completely unfurnished and needs some renovation. We signed a lease for 13 years, and have been having fun playing around in Google Sketchup designing what changes we want to make, and also exploring the options for furniture here in Bali, where department stores almost don’t exist and it’s easier and often cheaper to get furniture custom made. It’s been a fun creative outlet for us.

Here are a few pictures of the house.

And here are some rough screenshots of what I’m thinking the house will look like when it’s finished (except for the missing rooftops and plants and the wrong colors, etc). We’ll be knocking out walls, moving the kitchen outdoors, adding a couple rooms, and connecting the two separate houses on the second floor.

When we travel, we’ve all missed having a piano with us. And while piano keyboards have become extremely versatile in the types of sounds they can produce and in their ability to replicate the sound and feel of an acoustic piano, they are still among the least portable of musical instruments. I’ve wanted to change that for a long time, and I had a dream several weeks ago that inspired me to take some action on it.

I’ve been working on creating a digital piano that folds up small enough to fit inside carry-on luggage. The only other piano I’ve seen that folds (besides toys) is the Vax77, but it only has 77 keys instead of 88, it’s too big for carry-on luggage (it just folds in half), it costs $3,000, and they don’t make it anymore. So I made several sketches by hand and on Google Sketchup and have been working with some engineers trying to take it to the next step. I originally started trying to get it to fold into thirds, but I’m now thinking that fourths will work better, and I’ve drawn a few ways that it could work. Here’s one of them.

I understand that the digital piano market it relatively small, but I’m not doing this to become rich. Like my other business, Music Teacher’s Helper, I’m doing this because I want to use the product myself. Undoubtedly there will be other musicians who are tired of lugging around heavy pianos to gigs or band practices and paying expensive baggage fees to check them when flying (with the risk of having the luggage mishandled or misdirected). Perhaps a Kickstarter campaign can help me see if there will be enough interest to take it to production.

I’ve never done anything like this before, and don’t know what it will take to engineer, manufacture, sell, and support a complex physical product like this. It’s costing me quite a bit already, and the whole thing may never even get off the ground. But I’m having fun and learning a lot in the process. For example, I learned about an amazing technology called polyphonic aftertouch that allows pianists to be much more expressive in their playing, adding dynamic expressions, pitch bends, vibrato, and more to each key individually as you play. It’s an evolution of the keyboard instrument (a handful of keyboards from the 70’s and 80’s had this kind of ability, but very few since). Lately, TouchKeys has come up with a new and very impressive way of handling it. Check it out in the video below. I would love to get technology like this in my folding piano, but I don’t know if it will be cost effective to do it or not. I’ve been in touch with the inventor, and we’ll see what happens.

I also decided to finally go ahead with the idea of my dream app. I created the plan months ago, but I figure now is as good a time as any to make it a reality. It’s like many of the dream logging apps that already exist, where you write down the details of your dreams upon waking. Only this will include reports that analyze your dreams to show you the themes you’re dreaming about most regularly and help you find connections and symbols your subconscious is dwelling on regularly. There’s a lot more I may do with it, but that’s the basic gist. I plan to make a version for both iPhone and Android.

By the way, for those wondering why I’d share all my business ideas publicly before I’ve even created them (rather than requiring you to sign an NDA before I even tell you about the idea, as many new entrepreneurs do), it’s because I realize business success isn’t so much about the idea as it is about the execution of the idea. And even if someone else with a lot of resources and passion and experience came along and made these products before me, then great! Now I don’t have to spend my time and money creating it and I can just enjoy using the product. Just let me know if you’re doing it so I can say thanks and buy one from you when it’s ready. :)

I’m also getting back into music more again. For months, every time I sat at the piano to play, I would hit the record button. Much of what I played was gibberish, boring, predictable, or uninspiring. But every so often I played something that touched me or was really fun. So I’ve paid someone to transcribe those pieces from midi into readable sheet music for me (since doing that myself would be time consuming and doesn’t sound like much fun). I’ve been working on developing these pieces and will hopefully have some new music of my own to perform soon. I’m studying more jazz piano as well, because I want to get better at improvising using more complex chord structures and voicings. If you know of any good advanced-level jazz piano books or pieces (fun jazzy music to play so I can get the feeling in my fingers), let me know — especially if I can buy it digitally.

We’ve also jumped right back into homeschool with more gusto than ever. We’re working about 3 hours per day solidly with the kids on everything from math and reading to science and music. And we’re all enjoying it, for the most part. It’s fun to see the kids improve and learn about things they’re interested in. For example, Emily is learning html and css through CodeAcademy.com. Marie is enjoying the Land of Stories books. And Aysia is pretending to be a princess and enjoying all the toys and dress-ups that are available in this house we’re renting until the renovations are complete on our other house. Jen’s doing an amazing job with the girls and has found a lot of fun homeschool resources for them — more just keep popping up all the time that make it so much more fun and easy to learn than when we were kids. She’s also working with the kids on designing some clothes to have a tailor make for them, possibly to sell as their own clothing line.

So, we’re doing a lot right now. We’ve even been doing our own cooking. It’s been so long since we’ve cooked big meals and done dishes that last week, the girls really wanted to do them. They were even fighting over who got to do the most dishes, thinking it wasn’t fair if they didn’t get to do as much as their sibling. Unfortunately, that’s over and I end up doing the dishes most days. But starting next week, we’ll be having someone come to make dinners, which will free up a bit more time. There’s a lot to balance — time alone to recharge, time together, time with friends, and more, but we’re loving the routines we’ve set up, and the creativity that’s flowing. We’ll continue taking life one day at a time, and try to be present to enjoy each moment along the way.