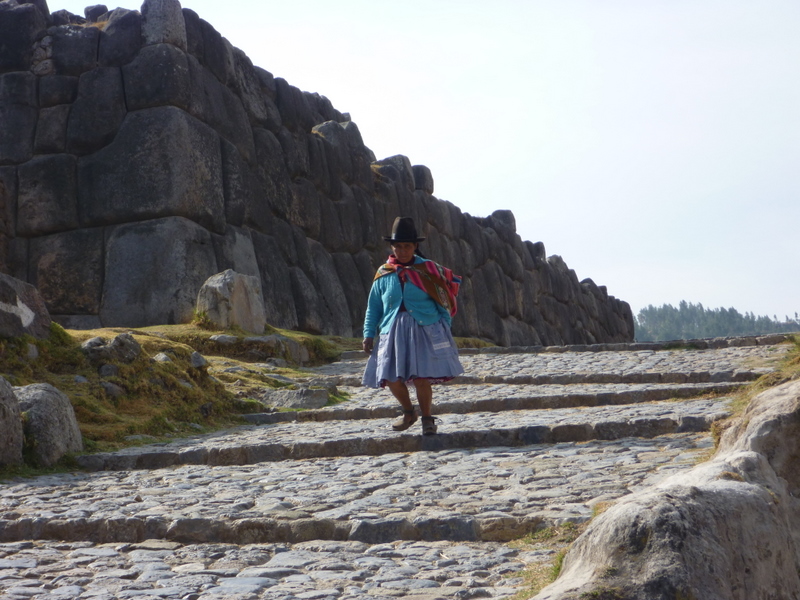 My first impression of Cusco, Peru was that it was dry, dusty and hot – until night time. Then it was dry, dusty and cold. Granted, we arrived near the end of Cusco’s dry season, so I can’t expect to see much green. But between the clay-brown buildings, sandy mountains, and dusty streets, there isn’t much color except for the local women, who wrap brightly-colored woven fabrics around their necks to carry babies, groceries, and other items. You’ll also see them in tall hats, with double black braids that hang down their back, and big smiles that bare their front teeth. 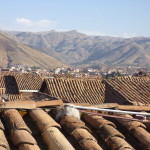 Despite its lack of color, however, Cusco is a city of great character. It is surrounded by ancient ruins from the Incan and earlier civilizations. Most of the streets are very narrow, leaving room for only one car, and a small sidewalk. The walls on the buildings are uneven in height, and look as though they were all made by hand. Doors are not a standard size, either, and I often found myself hitting my head on door frames. The doors themselves are also not always made to fit the frame, leaving uneven open spaces on parts of the door. But regardless the outside appearance, you never know what to expect when you walk through the door. Looking through one, you might see dirt floors opening up into a courtyard with laundry hanging over cement steps. Another door might look like a first class luxury hotel with marble floors, running fountains, and ambient music. Looks can be deceiving. 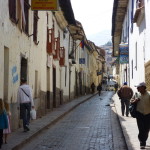 Cusco sits at an extreme altitude of 3395 meters (11,203 feet). I underestimated how much this would affect me. I found myself panting for breath just walking down the street. One day we went with a group on a short hike into the mountains following an old Inca trail overlooking Cusco, where we did yoga, had some “sound therapy” where we heard different types of relaxing instruments, and had a lunch of sandwiches and fruits. It was a lot of fun, but I felt pretty light-headed at times, and Emily even threw up on the way back, most likely due to altitude sickness.

Whether related to the altitude or not, most days in Cusco found someone in the family to be sick, usually with digestive issues, diarrhea or vomiting. For most of the first week, my stomach hurt every time I ate. And I also spent a violent night at our hostel with extreme stomach pain and vomiting. The girls each threw up at least once or twice in the morning. Somehow, Jen is the only one to have avoided any kind of stomach sickness. I almost went to the doctor, which is just over $100 for them to run several tests and give you some medicine. But I started feeling better about the time I learned I could do this, so didn’t end up going. 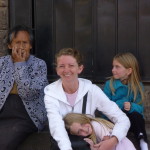 Resting next to nose-picking woman

Restaurants are abundant and inexpensive. Small shops to buy bread, drinks and snacks exist on every street, usually within 30 seconds walking distance of wherever you’re currently standing. The town is very walkable, and taxis are abundant. Because of the altitude, we found ourselves taking taxis regularly, especially on the uphill walk back to the hostel. You can get an hour long massage, facial or other spa treatment in Cusco for around $8-15. After a severe sunburn from our yoga hike (we forgot the sunblock), our faces all began peeling, and we decided to get a facial, which was nice. If we were staying longer, I probably would have tried a massage as well.

It seems like everywhere we went in Cusco, our kids were celebrities. One day, just on the walk back to the hostel, we were stopped five times by different people asking to take pictures with our kids! I know they’re cute, but wow. I think they’re blonde hair really stands out here, and being a big backpacker’s town, there aren’t a lot of foreign kids here. Emily and Marie really got tired of people wanting to take their picture. Marie usually refuses to smile now, and Emily is very aware of cameras being pointed at her. She also hates being called “muñeca” (doll) or “Barbie”, which are the names we hear most often – it even brought her to tears once. We’ve tried to explain that it’s a compliment, not an insult, but she still hates it. 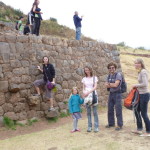 Some of the group at tipon

While in Cusco, we stayed in Hostal Magico, which is near the Aldea Yanapay school where we were volunteering. Many of the other volunteers were staying there as well, and getting to know these great people was one of the highlights of our time in Cusco. The volunteers come from all over the world and it was interesting hearing all of the different languages. The hostel itself was a really cute and cozy place, decorated similar to the Yanapay school. However, the bed was one the most uncomfortable I’ve ever slept in, sagging toward the middle where you feel the metal springs and wires poking you through the thin mattress. I’m sure all of the beds aren’t quite so bad, but ours was. 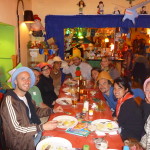 Friends at the Yanapay restaurant

One day, we went with some of the volunteers in a van to see parts of the Sacred Valley including the ruins at Tipon and Moray, and the towns of Pisac and Urubamba. We sang songs in the car from our respective countries, and had fun talking and laughing together. The ruins themselves were impressive, as well as some of the views along the way. The Andes are every bit as striking as the Rockies I grew up around, sometimes even more so. After the trip, we had a fun potluck dinner to celebrate Ellen’s birthday, one of the volunteers from Sweden. We also enjoyed a dinner with the volunteers on Friday at the Yanapay restaurant, where, upon entering, you can choose to wear a silly hat, causing you to fit in with the stuffed animals sitting at the tables, and children’s mobiles hanging from the ceiling – very cute restaurant.

We didn’t make it to all the ruins of Cusco. There are so many ruins here, it began to be a little monotonous for the kids. One exception to this is of course Machu Picchu, which I’ll be writing about in a separate post. I’ll also dedicate another post to our experience volunteering at Aldea Yanapay. So stay tuned! Until then, enjoy the pictures and video below.

Friends at the Yanapay restaurant

Alpaca in the road

Kids with lamb and locals

Resting next to nose-picking woman

Some of the group at tipon

Jen and Emily at Tipon

Hands up at Moray