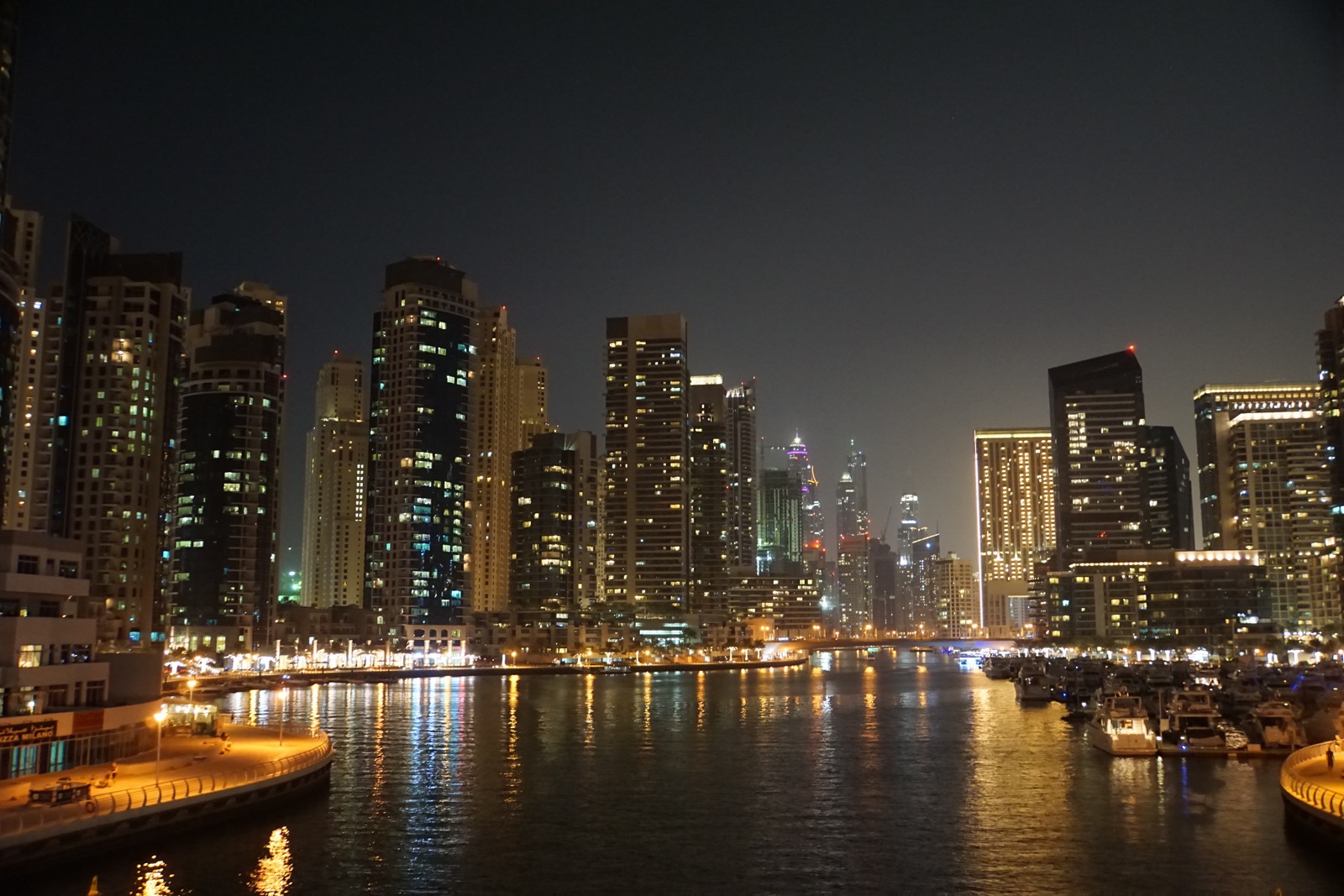 We were excited to go to Dubai when we booked our plane tickets, but then we became quite nervous after reading things like this online. Not your typical laid back, go with the flow, type of rules there. And, since we tend to feel a bit rebellious with things like that, we hoped we wouldn’t be overly triggered and/or noncompliant. However, we didn’t encounter any problems during our visit, and we found our experience of this city to be very fun and interesting!

This part of the world was completely new to us. So, being more than just a little bit curious, we opted to go for a brunch at the Sheikh Mohammed Centre for Cultural Understanding, where they have an open discussion (with actual Emiratis!) about the culture and traditions of the area. We enjoyed what we learned, and many misconceptions were cleared up for us. For example, many women choose to wear a burka as a fashion statement. The burkas aren’t hot and/or hard to see out of, they are made of a very thin and sheer, breathable material. They aren’t even required to wear them as part of Islam, only by some countries. Most women don’t wear them at all while traveling to western countries, so as not to draw attention to themselves. We left wanting to learn even more, and to understand at deeper levels, especially in regard to the actual religion of Islam. We ate things like dates, rice, chicken, chickpeas, saffron, flatbread, donuts, and tea. One of my favorite things they served us was the Arabian coffee. In the Middle East, they don’t drink their coffee with milk, but they use spices such as cardamom, cloves, ginger, and saffron. Very tasty.

The cultural center is part of the Bastakia Quarter, a historic neighborhood and one of the city’s most picturesque heritage sites, built in the late 19th century. It is made up of many traditional buildings, with wind towers for old-style air-conditioning. The alleyways are narrow, maze-like, and pedestrianised. Situated along the waterfront at Dubai Creek, it has a beautiful modern white mosque, the Dubai Museum, the Arabian Tea House, shops (with fabrics, spices, crafts, etc.), cafes, restaurants, art galleries, and boutique hotels. It was a lovely way to spend the afternoon.

That’s about the extent of old-Dubai that we visited in this city. We spent the rest of our time in the ultra modern metropolis part, which is also very beautiful in its own way, with different types of stylistic elements and architecture that were all new to us. Dubai Mall, for example, is the most awe-inspiring mall we’ve ever experienced. It includes 1200 shops, Kidzania, Dubai Aquarium and Discovery Centre (with one of the worlds largest acrylic viewing panels), Dubai Ice Rink, SEGA Republic (indoor theme park), a four-story tall waterfall, the worlds largest candy store (Candylicious, a candy store spanning over 10,000 sq ft), a 250-room luxury hotel, 22 cinema screens, an incredible fountain show (at the base of the tallest building in the world, the Burj Khalifa), 120 restaurants and cafes, and over 14,000 parking spaces. Mega! Oh, and not to mention, the coolest dinosaur exhibit ever.

We didn’t do everything the mall had to offer, but that would have taken weeks anyway. We did spend hours at Kidzania, however, which is one of many around the world. It’s a place where kids get to pretend to be adults and perform jobs in a constructed real-world-type city environment. Everything is built to scale for children, complete with buildings, paved streets, and all types of shops/activities, etc. They get to earn kidZos (Kidzania’s currency) and spend it on little trinkets or on fun activities/classes. Our girls especially enjoyed trying out things like interior design, fashion modeling, car design, remote-control car racing, newborn nursing-care, beautician work, painting, and working as a professional chef, among others.

A large section of the Dubai Aquarium is on display for free as part of the Dubai Mall public space, so we stood mesmerized in front of the huge tank, oogling all the interesting creatures. We also saw The Waterfall, which cascades the entire height of the mall, all four levels, and includes many fiberglass sculptures of human divers as part of the display. We spent time enjoying the impressive dinosaur exhibit we stumbled upon, as we were exploring and shopping around. We enjoyed a meal at Markette Restaurant and Creperie. Elsewhere, in the expanse of this very large and stylish mall, we tried some new treats, such as Turkish Delight, which really was quite delightful! We bought lots of it. We did see the fountain show as well, which was breathtakingly beautiful, with music, fountains, and lights all choreographed in perfect harmony. The backdrop of the show was the altitudinous Burj Khalifa building (the tallest building in the world), which was wired with it’s own set of lights to twinkle in time with the performance. Quite memorable.

The apartment we rented for our stay in Dubai was within a couple minute walk to the Dubai Marina, so we took a nice stroll down there one night and slept on the grass, while the girls played in the sand. Lots of families were out having fun, and the temperature was perfect. November is certainly a good time of year to visit.

We also tried out a game called HintHunt in Dubai. We had to solve a mystery in a locked environment, which was also the crime scene, and there were a lot of really great unexpected twists and complexity. It was a bit too tricky for us to solve in time, but we certainly had fun trying, and they showed us how everything came together in the end, which was a nice added bonus. It was like we had jumped into a mystery book or something, and we were the ones playing detective. Last, but not least, we made a stop in Ikea to pick up some kitchen supplies for our newly renovated home in Ubud, Bali. We’re excited to share all about that project on this blog as well – as soon as all the finishing touches are in place. Please, stay tuned!