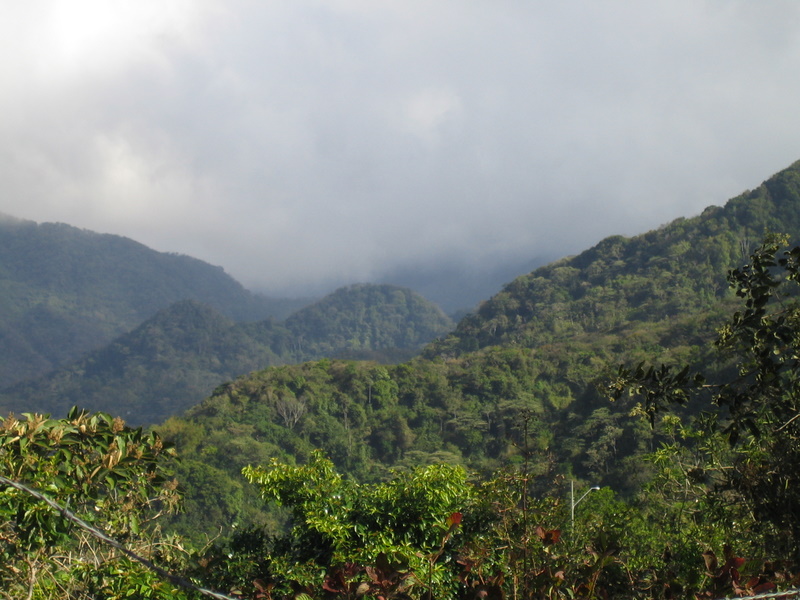 On Wednesday, we left El Valle and headed out for our next stop – Boquete – a five hour drive on the Pan-American highway. We left our rental house about 9:00 a.m. and drove straight to Penonome (1.5 hours) for gas and snacks – with a couple stops along the way for Emily to recover from car sickness. She threw up once on the way to El Valle – lots of winding roads.

We took a detour to stop in La Arena on the Azuerlo (sp) peninsula, which is a town known for its pottery and traditional Panamanian culture. We went into a community center there, and found a very nice lady there who took pictures of the girls in pretty Panamanian dresses, which the girls showed an interest in. She had so much fun grabbing items from the store and arranging them for the girls pictures. She was very sweet. The girls had been wanting dress ups, so we bought them these authentic Panamanian clothes as a souvenier.

On our journey, we saw a lot of policeman with radar guns and motorcycles waiting to pull people over for speeding. I’m a natural born speeder (thanks Mom), and love to go fast. Twice, someone right in front of me got pulled over. Thankfully, they didn’t pull me over for going just as fast. Here, there are no flashing lights, the cop just stands in the middle of the road and waves for you to pull over.

However, seeing two other cars get pulled over wasn’t enough to keep me from speeding. Yes, I got caught as well – although I was misinformed about the speed limit. We were going 100 km/hr, which was the speed limit on the highway and was the last sign we saw. But I guess when the road goes down to one lane each way, the speed limit changes to 80. We didn’t know. The cop pulled us over, said there was no problem, and informed us of the speed limit. But then he proceeded to write a ticket, and said he would be sending my license to Panama city and we would have to go there and pay $90 to get it back! We told him we weren’t going back to Panama city, but were heading on to David (near Boquete). But he said we couldn’t pay it in David, but had to go to Panama City.

A view on the drive from El Valle to Boquete

This didn’t make sense to us. We finally told him we would be flying on an airplane from Bocas back to Utah (which wasn’t exactly true – we will be stopping in Panama City briefly before flying home in three more weeks – but I needed my license during that time!). Something seemed to click for him then, and Jen asked if we could pay now instead. He said we could pay $60 now instead of $90 in Panama City, so we gave him $60 bucks, got my license back and left. He didn’t fill out any paperwork or write down my name or anything, so I’m thinking this was more of a bribe than an official payment of a speeding ticket. I’m not sure how that works here. But I was just glad I didn’t lose my license, and that this ticket probably won’t go on my record. :)

After that, I tried very hard to go 80, and I did have to try hard! That’s like 45 miles an hour on roads with lots of up and down hills and no cruise control. It’s just not fun to drive slow, especially when you know you’ll arrive an hour later than you planned because of the loss in speed. I could hardly enjoy the ride or pay attention to the road, I was so intent at watching the speedometer. But I didn’t want another ticket.

Emily and Marie at McDonald's

After La Arena, we had lunch at McDonald’s in Santiago, and then I got behind a taxi who was intent on going the speed limit, so I just stayed right behind him and tailgated him all the way to David, because I didn’t want to pass him and risk starting to go faster. However, we didn’t see one single policeman all the way to David, so I guess they only care about speeding on the eastern half of the country.
Or maybe the policeman all go home after 3pm…

We found also that the scenery just gets more lush and beautiful the further west you go. There were a lot of dry spots back by El Valle, but things seem to grow naturally more green as you get closer to Costa Rica.

We finally arrived safely in Boquete about 6pm, at Cabanas Sabrin, where we’re staying in a cute little 3 bedroom cabin. Although I probably wouldn’t stay here again with little ones mainly because of the steep and narrow staircase, and no hot water (both things I didn’t know about before booking). We’re only here for three nights, though.

Boquete is a scenic town. There are grand mountain views, and an alpine smell. The city reminds me a lot of Park City, Utah, but smaller, a little more rough and not as well kept up. But it’s the “mountain town” kind of atmosphere – although no skiing. :) It’s a bit colder here, too, than El Valle. Probably around 60 degrees right now, so we keep our jackets ready for evenings and mornings.

A view on the drive from El Valle to Boquete

Emily and Marie at McDonald’s