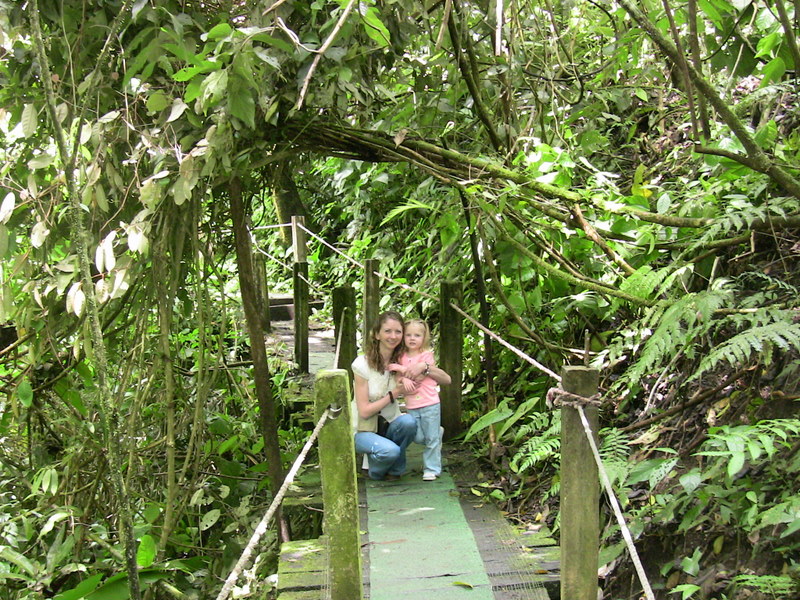 Our second morning in El Valle, we got up early (6:30am) hoping to see some birds and other animals. We heard the same pretty bird songs as the day before and other pretty sounds, but didn’t see any animals. We had a nice walk, although the girls were pretty tired and ornery that we got them up so early. I forgot to mention, we did see some lightning bugs the night before, which was pretty cool.

Jen made a great breakfast that morning of eggs & ham, blueberry muffins, toast, and juice. Then we took showers and went to the fruit market. They have some great fruit here – great quality and great prices. The pinneapple smells heavenly. We bought quite a bit of fruit and browsed through the market and other little shops they had there. We dropped it off at our house, then went back out to see the El Macho waterfall.

Jen and Marie by El Macho

It cost about $7 total for all of us to hike to the waterfall. It was a very short, but beautiful hike and the waterfal was majestic. It’s dry season so it’s not as full as it is during other times of the year, but we were able to hike right up to it. There were some people swimming right below it, and Emily was sad that we didn’t bring her swimming suit. But was happy when her foot would slip on the rocks so she could get her feet wet. lol.

After El Macho, we went on a Canopy Adventure – a zip-line tour through the rainforest. They don’t normally allow kids under 6 to go, but I asked if they could ride with us, and they said yes. We decided to do the shorter 20 minute version rather than the full hour, in case the girls were really scared of flying so high and fast above the ground. And it was also much cheaper (though still expensive – $12.50/person vs $50/person).

They strapped us each in our own harnesses, and we took another little hike. They had Marie go first, and the guide took her across. (I guess they didn’t mean we would ride with our kids. Oh well). We worried that Marie might be terrified, especially being separated from her family and with a stranger, but she loved it! Jen was next, then me, then Emily.

It was really exhilirating! Being so high up in the trees, and seeing the rainforest all around me, with a 50 foot (or more) drop below, was very exciting. You also get to feel a bit like Tarzan because of the speed of the ride, which you get to control by pulling on the line behind you.

I was disappointed, however, in that our “20 minute” adventure, consisted of only about 15 seconds of riding on the zip-line – just one time is all we got. I guess the 20 minutes was for all the strapping and hiking. All of us loved it and wanted to do it again, but we were running out of time and money, so decided we’d try the longer tour again another day. This is really one of the funnest physical activities we’ve done on this trip.

We had lunch at a pizza place called Pinnochio’s, which was great. Jen’s Hawaiian pizza was the best I’ve ever had – fabulous flavor with fresh pinneapple. My lasagna was okay – too much cheese and not enough sauce, but it was still good.

After lunch, we spent some time on the Internet at the library. The girls played games, Jen checked her e-mail, and I worked and updated my blog.

Jen and her fruit

We came back home and relaxed for a bit. The girls swung in the hammock, then Jen did. The girls were having so much fun running around outside pretending they were on a space ship. I decided to join in, and we started playing together. I just followed along and Emily came up with most of the ideas – everything from killing aliens who were hiding in caves, to eating space man food like pizza and hot dogs. It was fun.

Then we watched some really old cartoons they had on DVD here, Jen made dinner (grilled ham & cheese sandwiches, with fresh fruit), and we went to bed.

Marie looking at the falls

Jen and Marie by El Macho

Jen and Marie watching their step

Emily was sad because she wanted to swim

Brandon and Emily on a bridge

Brandon and the girls hiking

Brandon and Emily in front of a cool tree

Brandon and Emily crossing a stream

Jen and her fruit

So fertile, even fence posts grow…