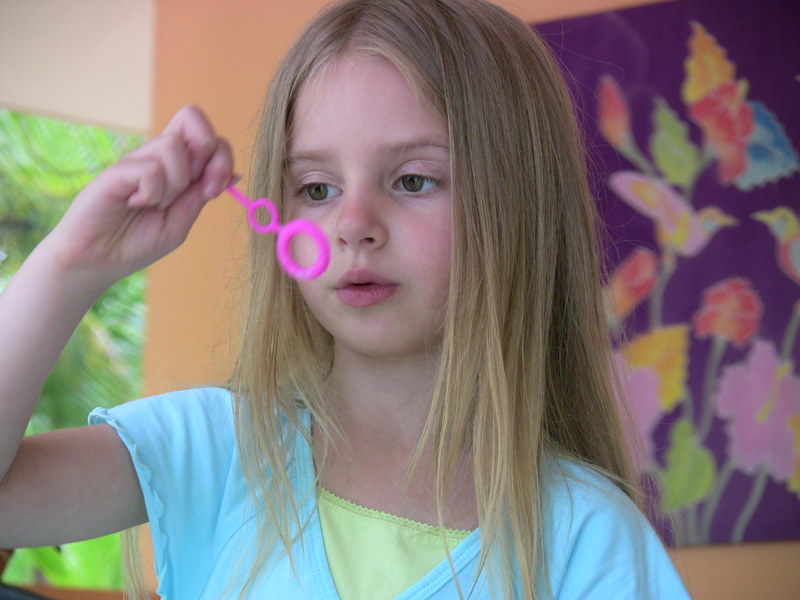 On Bastimentos, we’re staying in a part of the island known as Salt Creek. And the past couple days, we’ve spent most of our time relaxing at home, but have also ventured out a few times when it wasn’t raining (usually getting caught in a rainstorm in the process). It’s been a lot of fun. We did have about an hour of sun Wednesday morning, but the rest has been cloudy and rainy. But the temperature has never ceased to be absolutely perfect! Not too hot or too cold. Just perfect.

The girls have enjoyed blowing the bubbles we got them in Panama City, but hadn’t used until now. They’ve spent hours blowing bubbles out over the sand. They seem to float forever here, and even bounce off the water, or ride on it for several minutes before popping. They’ve enjoyed making little ladybugs and caterpillers out of half-bubbles on a glass-top table on the patio. We’ve refilled their bubble containers many times with a dish-soap / water mixture. What fun!

Brandon bringing back the ball

One morning the girls were playing with their inflatable beach ball, and Marie happened to throw it out just a little too far and the waves weren’t bringing it back. The girls shrieked in terror, drama queens that they are, as their ball floated out into the ocean. Daddy to the rescue! I hopped in one of the kayaks and went off to get the ball, bringing it back to safety. After that, the girls didn’t care about the ball. They wanted to go in the kayak! Until they got inside – then they were a little scared. But I convinced them to try it one at a time first. Emily loved it, but Marie was still a bit scared.

Later, we went out as a family in the big kayak and got caught in a very heavy rainstorm, so we paddled to shore, and stopped at a nice hotel (with bungalos) called Casa Cayuco, and visited with the owner for a while, who brought out towels for the girls. When their daughter was Emily’s age, they lived for a year on their sailboat while sailing from Washington to Costa Rica, then spent two years in Costa Rica. How adventurous! It’s fun to meet new people.

The next day, Jen made some fresh lobster that was just caught and brought to us the night before. It was quite good.

Family picture at the ngobe community

That afternoon, we had Alfredo, one of the workers around here, take us to a Ngobe Indian village. We took a short walk, then got in a little canoe to ride through the river. It was a beautiful ride. When the canoe stopped we got out and got a tour of the community. People have been living here for over 100 years. He also told us about the trees and spotted some wildlife, such as parrots, and a 3-toed sloth (see pictures below).

It had been raining a lot that morning (and the night previous (and for the last two months for that matter)), so there was a lot of mud, and we got pretty dirty. But we had a great time. And Alfredo was a great guide.

Marie at the house

Side view of the house

Jen and the girls

Family in a boat

Brandon bringing back the ball

Looking out from dry-off spot

Brandon and his trees

Getting ready to ride the boat

Sloth in a tree

Family picture at the ngobe community

Riding through the mangroves