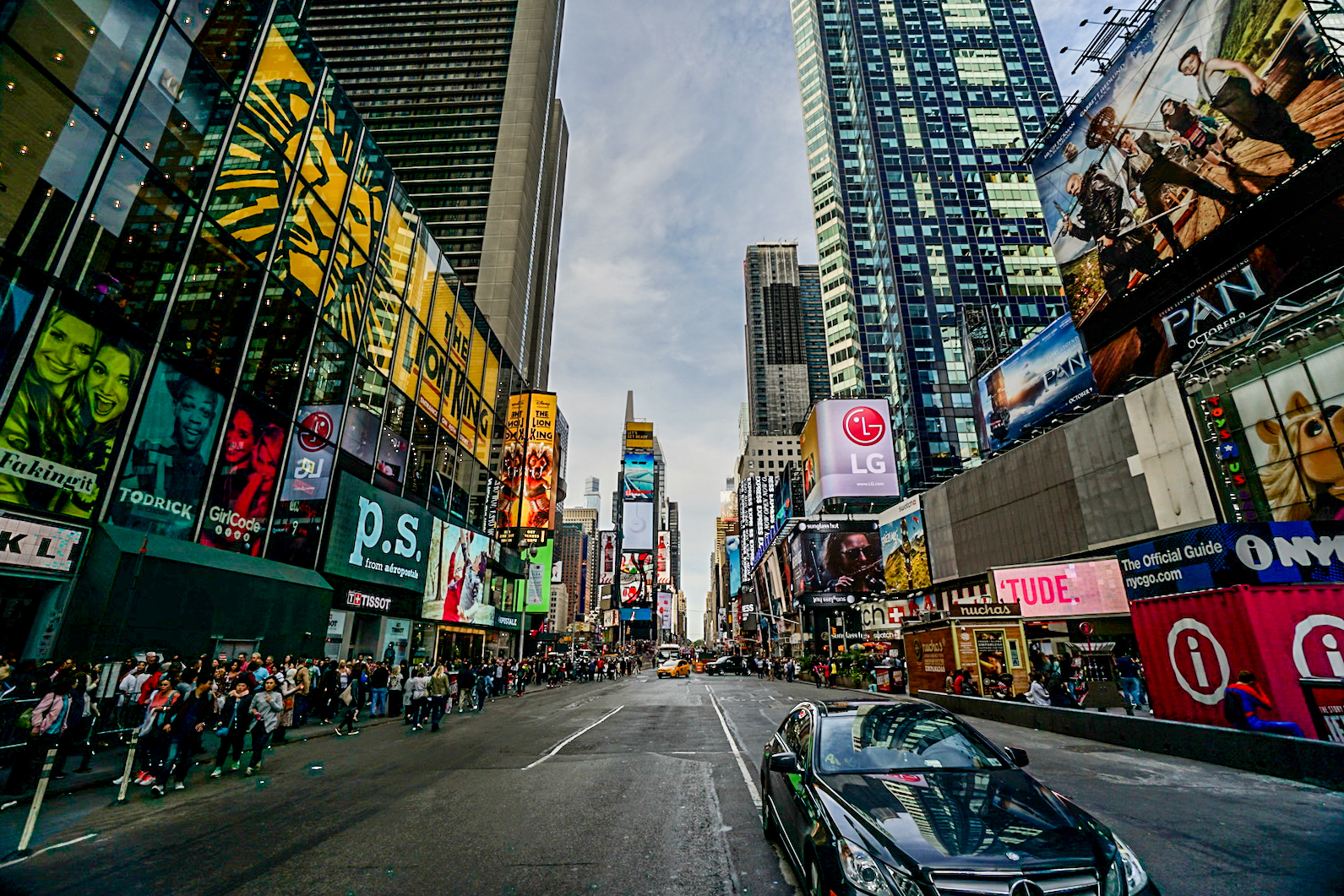 Staying Sane in the City: Family-Friendly Tips for NYC

If I had to describe Manhattan in one word, it would be “energetic”. This intense place is buzzing with activity and excitement. Mammoth skyscrapers, throngs of diverse individuals, flashy advertisements, and the noise and smells of a big city. During our ten day trip there, we found ourselves feeling awed and engaged, but also exhausted and overwhelmed. 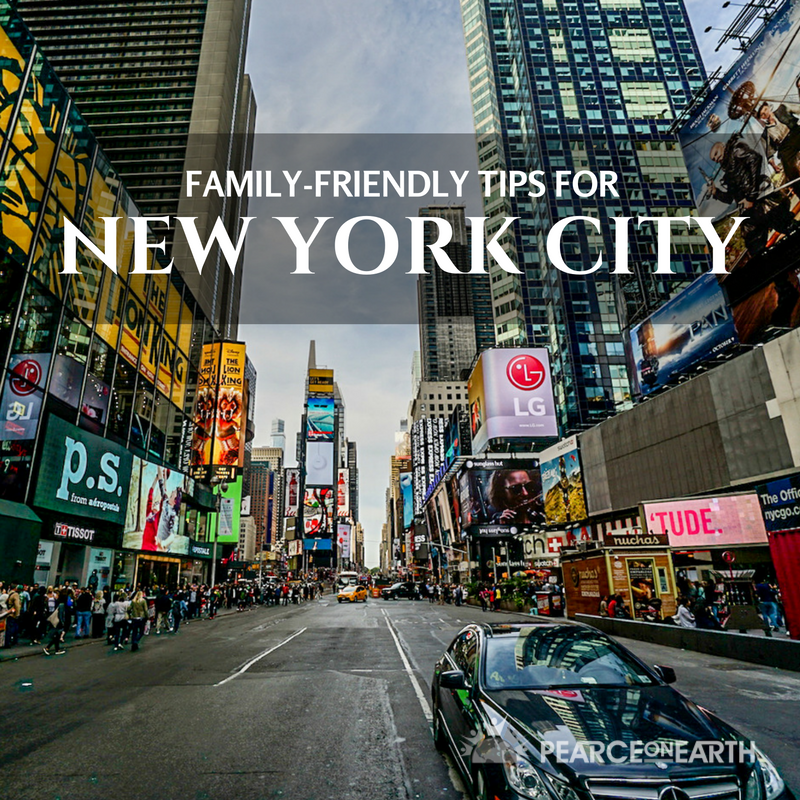 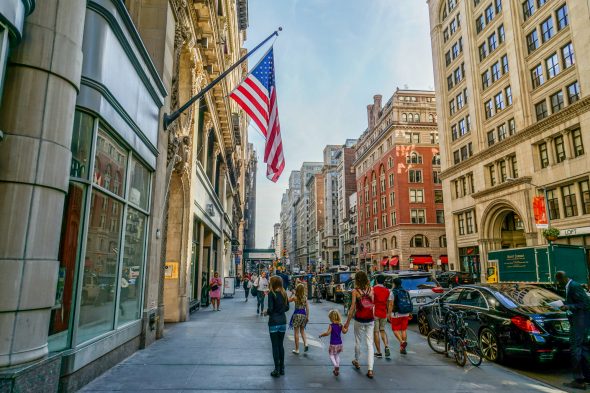 It was a bit surreal to visit landmarks we’d heard and seen in countless movies, stories, and music since childhood. Broadway, 5th Avenue, the Brooklyn Bridge, Times Square, the A-Train, 59th Street, the Statue of Liberty, Central Park, the Empire State Building, and dozens more. There is so much history here, an endless array of things to see and do, and an eclectic mix of people from all over the world. Truly, New York is a city like no other.

Juggling emotions among the five of us was more of a challenge than usual, especially because our place of refuge was a storage-unit-sized 1 bedroom apartment. And it cost more than we’d normally pay for an entire month’s rent on a 4 bedroom house. But we enjoyed the location in Gramercy, and spent several days inside working, playing, writing, and recovering from our time on the town. 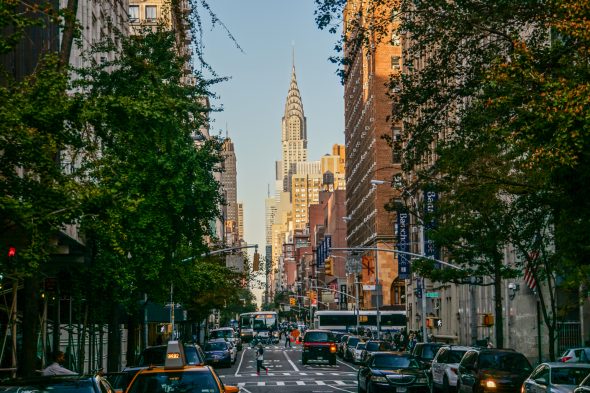 And what an amazing town it is! Not all of it is expensive, either. We found plenty of interesting free and low cost activities and eateries. Many museums offer free days once a week or are donation based. We visited the Natural History Museum, the Museum of Modern Art, the 9/11 Memorial Museum, and the Guggenheim Museum, all for free (or very low cost).

Our favorite was the Natural History Museum, with exhibits on everything from dinosaurs to outer space. I’d probably recommend avoiding the Guggenheim with younger kids, as many of the artistic creations were delicate, and harder to appreciate without reading the background stories. 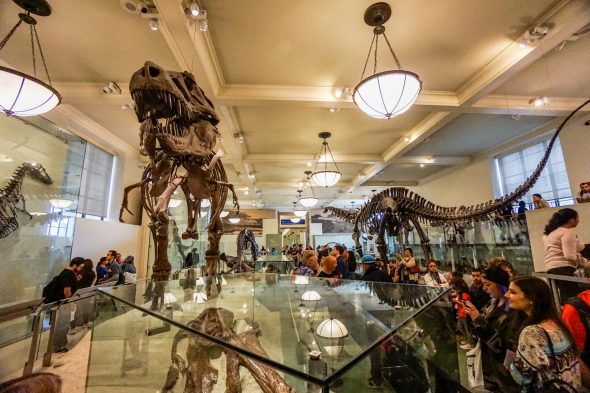 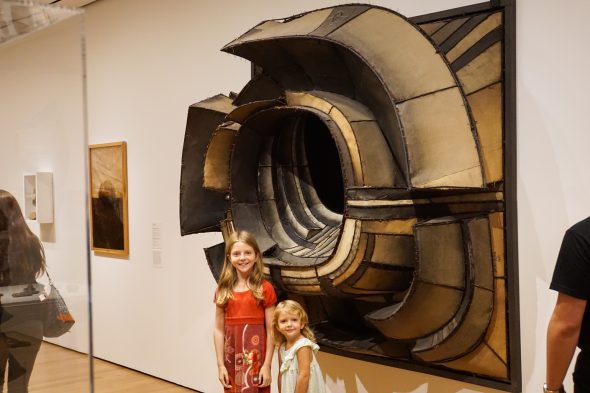 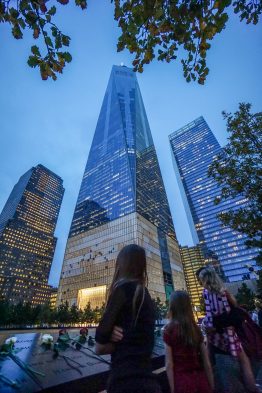 Another free activity was the Staten Island ferry ride, which provided great views of the Statue of Liberty and Manhattan along the waterfront.

Afterward, we took a walk across the Brooklyn Bridge (it took us 30-45 minutes), and enjoyed breathtaking views of the city, a wonderful pizza restaurant called Juliana’s, and some delectable frozen custard at the Shake Shack. 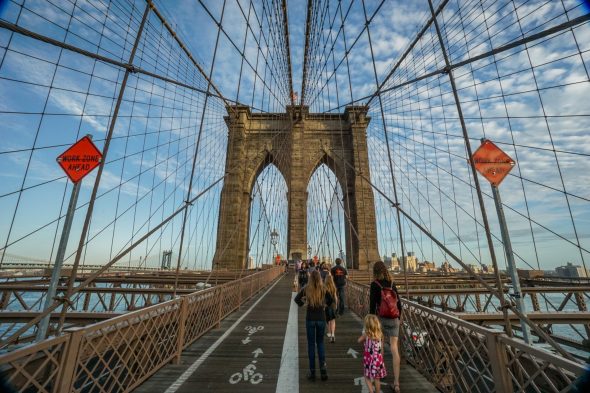 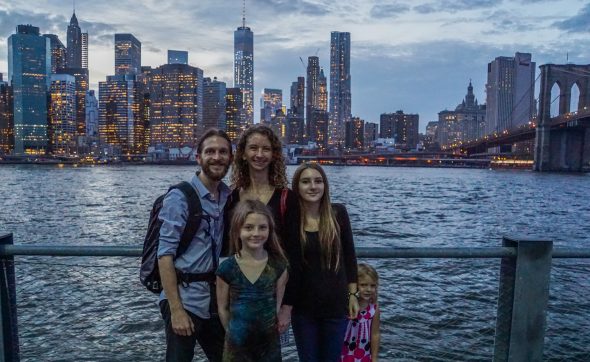 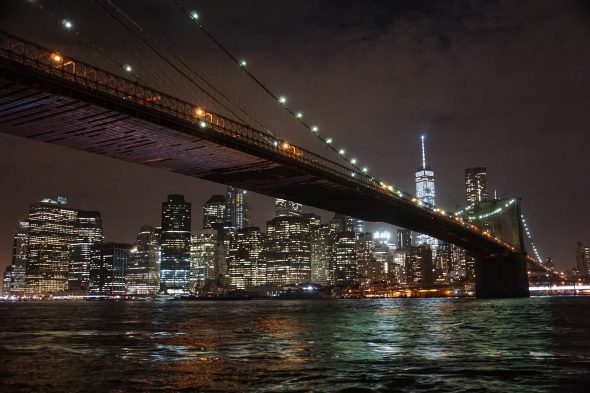 That day, I was also asked by four different people if I was Jewish (a first for me). I guess my beard needed a trim. Do I look Jewish to you? 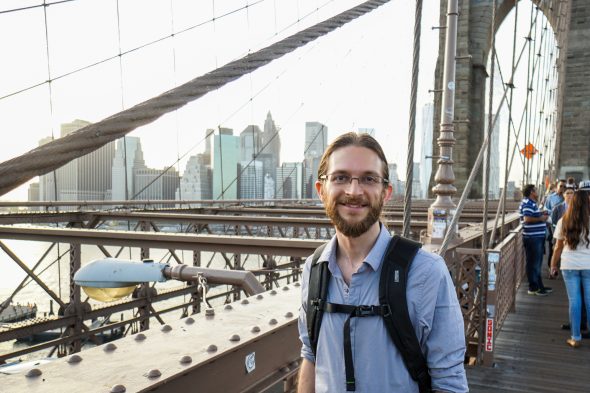 Most of these sites were walkable from where we were staying, but we also used the subway system regularly, which was cleaner than I expected, but still dirty compared to Japan. Certain times of day were almost as crowded as Tokyo in rush hour, however. We purchased 1 week metro passes, which were helpful with young kids at the end of a long day.

Of course, we couldn’t pass up the opportunity to visit the iconic Times Square. This is probably the most intense and active place we’ve ever been – a constant barrage on all the senses, and utterly captivating. It was much bigger than I expected, spanning several blocks with so much to see, hear, and smell. 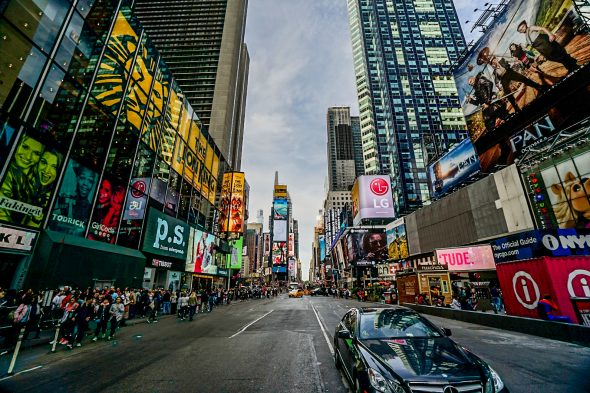 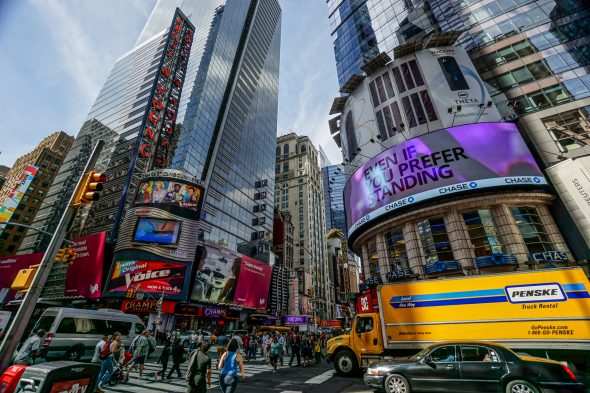 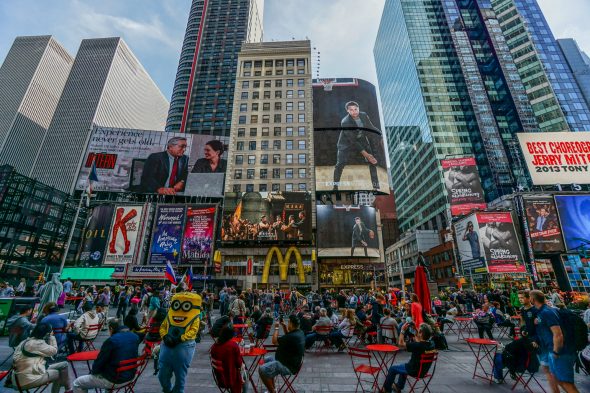 Quick tip: If you’re approached by costumed cartoon characters wanting a photo with you, expect to be asked for a large “tip” afterward. 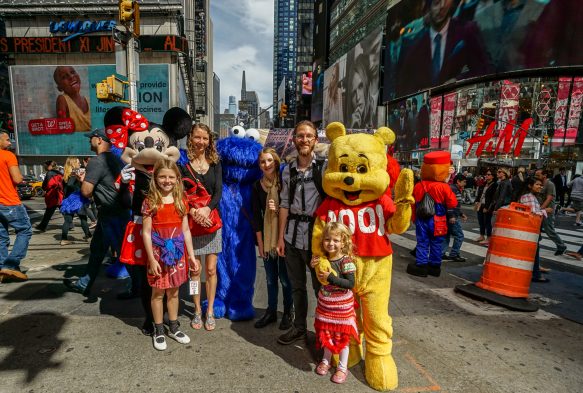 While in Times Square, we ate at Ellen’s Stardust Diner, where talented singing and dancing waitstaff show off their skills while you eat, hoping to one day score it big on Broadway. 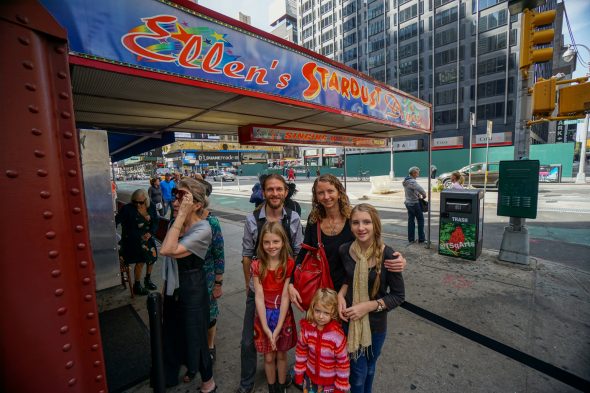 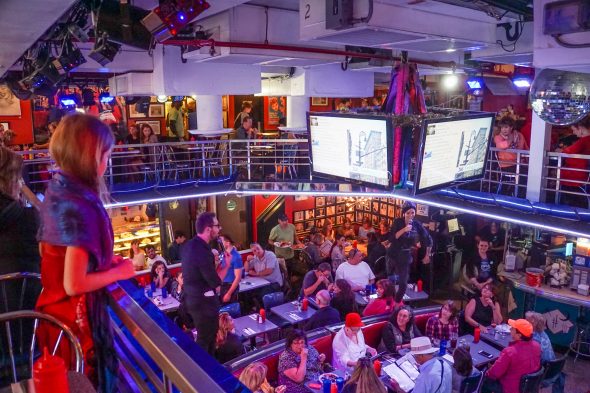 Speaking of Broadway, we also splurged on tickets to the Lion King! What an incredible production! The costumes and music were phenomenal. Emily and Marie had performed in a Bali-inspired version of the Lion King earlier this year, and it was fun for them to see what’s possible on the stage. 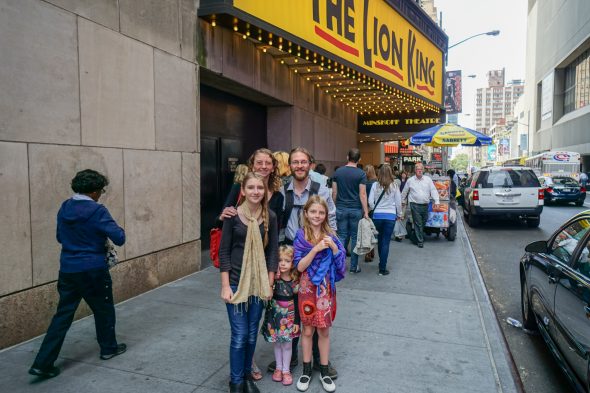 We also saw a number of street performers on our walks around town, including this bearded guy at Union Square, who I’d seen on social media months before – his name is Matthew Silver and I think he’s brilliant. I almost joined his crew that day. 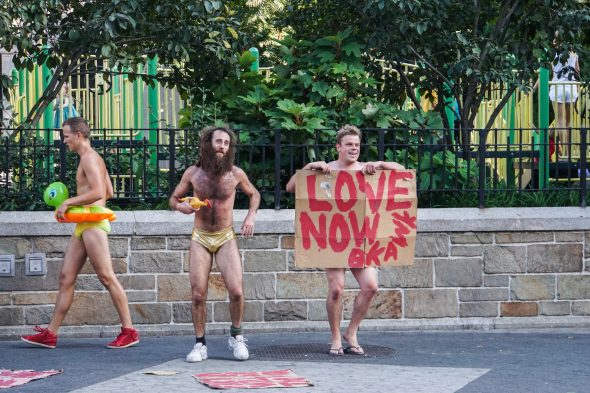 One afternoon, we rented bikes and rode around Central Park. Besides being very large, it is filled with lovely paths for riding and walking (and even driving), and some interesting statuary, bridges, and architectural landmarks, as well as playgrounds. There’s a “castle” near the center with some weather exhibits for kids, and even little Discovery Kits you can borrow with advanced notice that can make a trip to the park more interactive. 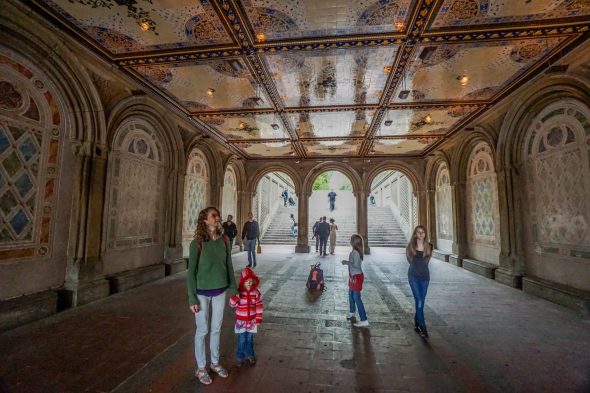 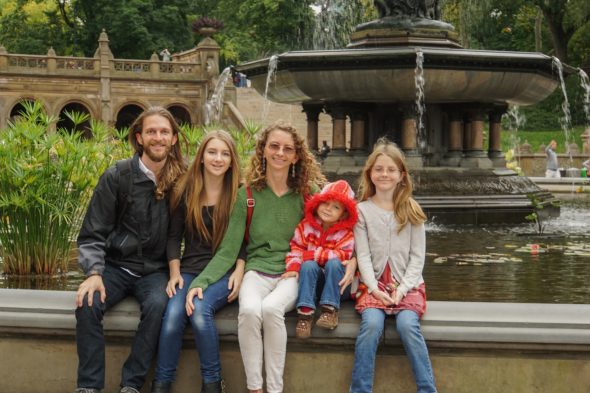 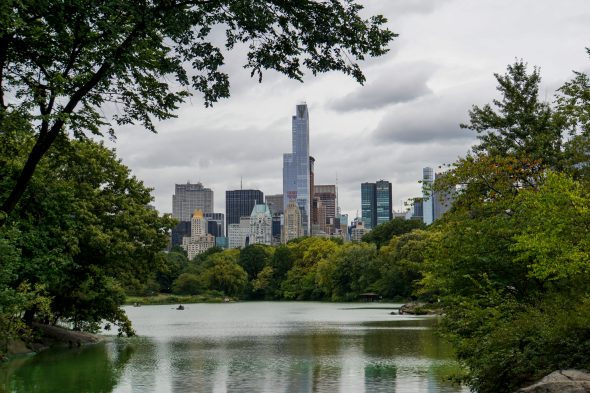 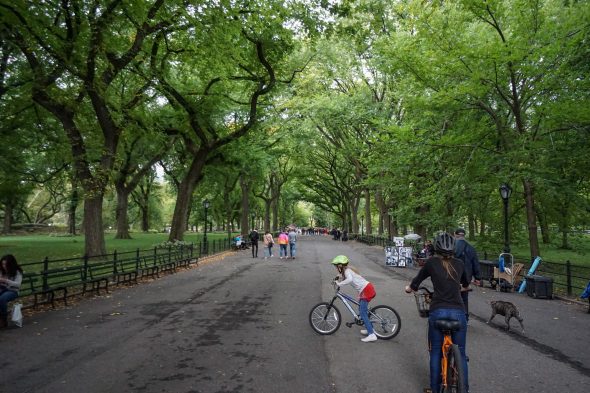 For food, we mostly ate out as our apartment didn’t have much of a kitchen. But there were plenty of good places we found, and most of them gave us enough food that we were fine with just two meals per day. Right around the corner from where we stayed was a fantastic bagel place which we ate at several times for brunch, but they also have lunch items there. We found the shopkeepers around the city to be very friendly as well as generous. On four separate occasions, the kids received free cookies, gummy bears, chocolates, and flashlights, sometimes just for walking into the store.

We went to several Indian restaurants, as we tended to stay up late and those were the only restaurants in our area that seemed to be open after 10 or 11pm. Perhaps some parts of this city never sleep, but it is certainly quieter at night.

One other interesting thing we noticed is that there are very few large trash bins around town. Instead, New Yorkers seem to put plastic bags of garbage on the sidewalks at night (possibly every night), which is all collected before morning. This makes for some smelly walks if you’re out late.

Getting out of the busyness of Manhattan, we took a short train ride across the Hudson river to Hoboken, New Jersey, where we met with some Czech friends who invited us up for dinner one evening at an Indian restaurant, after which we enjoyed a nice stroll along the waterfront. 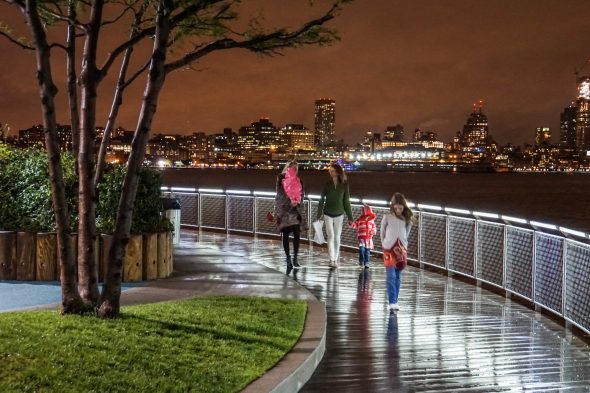 One other unique event happened while we were in New York – the blood moon lunar eclipse! It was just a short walk to the river where we were able to catch some amazing glimpses of the process. 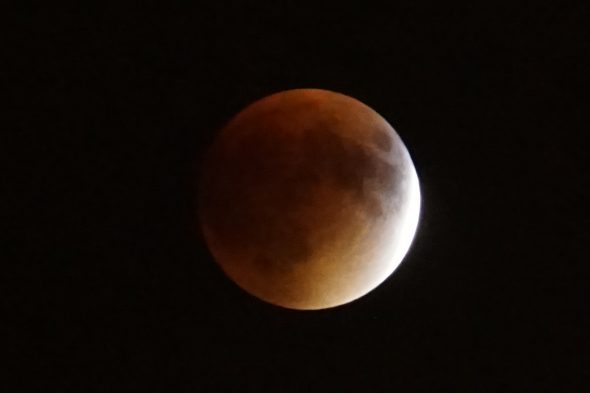 In contrast to places like Bali, which seem to pull us inward with intense introspection, New York is the kind of place that pulls us outward in so many directions that it forces us to either find our center, or be swallowed up in the chaos. While we enjoyed a busy schedule in New York, and there was so much more we could have done, we were ready to leave when the time was up. Especially because we were heading to our first unschooling conference in New Jersey called Life Without Instructions – one of the highlights of our year! More on that in the next post.

Have you visited Manhattan or New York City? How do you save money while traveling? Share your tips and join the conversation below.