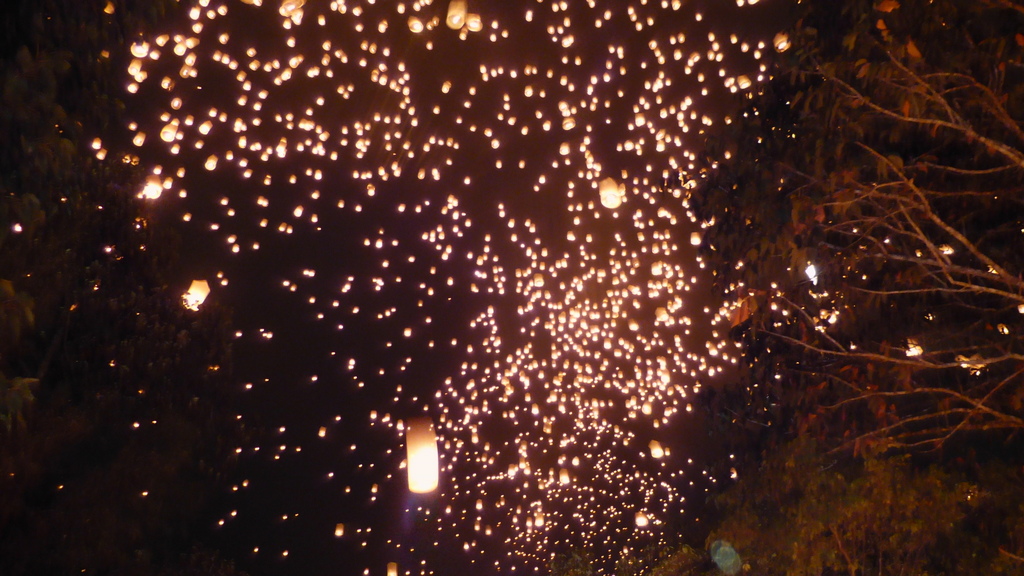 I’m so glad we decided to extend our Thai visas and stick around for all the festivals at the end of November. Not only did we get to participate in some amazing events, we got to do it all with dear friends: two families we already knew, and several other traveling families who we met for the first time.

The week started off with a traditional American Thanksgiving meal at the Art Cafe, complete with turkey, mashed potatoes, and pumpkin pie. Very different from the Thai food I’d been enjoying so much recently, but I was thankful to be sharing the meal with great company. Here are the families that joined us for the meal.

Next we went to an international hot air balloon festival. We arrived at 6:00 in the morning to watch the balloons fill with hot air and float away into the morning dawn.

Marie made an instant friend with Ella, from one of the other traveling families.

Several of us went swimming that afternoon, but there was a drunk German guy at the pool who we allowed too close to our kids (I should have known he wasn’t safe when he hugged me, pinched my nipple, and punched me in the chest — he was just playing, but I felt uncomfortable, and he was strong). Sadly, he ended up giving one of the little boys a head injury (he fell on a rock by the pool). It was quite traumatic and shook us all for a while, but he’s recovering and doing great. Note to self: stay away and keep my kids away from strong drunk people and those who don’t value personal space. It could have been much worse.

Later that night, we came back to the balloon festival and enjoyed the party. Laser lights, gourmet food, live music, fireworks, and hot air balloons lit up and synced to music. It was a fun atmosphere.

The most amazing event of the week by far was the Yi Peng floating lantern festival, where thousands of lanterns were released into the night sky like ascending stars, believed to carry away the negativity in our lives and send our wishes to the heavens. The effect was beyond words, beautifully overwhelming, and completely awe-inspiring! I don’t know how to accurately capture or express what we experienced. We also launched two of our own lanterns, sending Marie’s wishes that we could fly and do magic. :) And it was a magical night! (Be sure to watch the video below.)

And despite the 2 hour traffic jam afterward, in the rain, with 24 people crammed into a songteow (like a covered pickup truck), I would do it again in a heartbeat!

For a more thorough description of what this festival is like, check out the post that our friends, the Kings, wrote about it. They also have some excellent pictures and videos. Check it out here.

There is a restaurant 20 minutes south of Chiang Mai called Nic’s, with a huge bamboo playground, built like a ship. We met some friends there for a meal one afternoon, and then went to the nearby Night Safari, where a jazz festival was being held. We enjoyed walking around and seeing all the animals at night, including an R.O.U.S. (rodent of unusual size, also known as Capybara). I guess they do exist… There were also some dance performances and a musical fountain show on the lake, in addition to the live jazz music which you could hear throughout the park.

We also spent a day at the Chiang Mai zoo with four other families. We saw pandas, koalas, gibbons, and more. We fed hippos, leopards, giraffes, elephants, and ostrich. We played at the playground. And all had a great time.

That night, we enjoyed a relaxing meal together at the Aum vegetarian restaurant.

On our last day in Chiang Mai, we celebrated another festival, Loy Krathong, where decorations of flowers, candles, and incense are sent out on rivers and lakes, floating lanterns are launched into the air, fireworks are shot off with no regard for personal safety, and a street parade makes its way through Chiang Mai’s main road to the east.

Sri Pat hotel had prepared some banana leaves and flowers for us to make our own Krathongs, which we sent out on the river.

We had some good street food that night, including sushi and noodles. The atmosphere was crowded and fun, but also beautiful and romantic. The gyouza and mango sticky rice I had on the walk back to the hotel, with a stream of lanterns floating into the distant sky make for a perfect last night in Chiang Mai.

Here is a video with footage from these festivals and the fun time we had in Chiang Mai. Check out more pictures below as well.