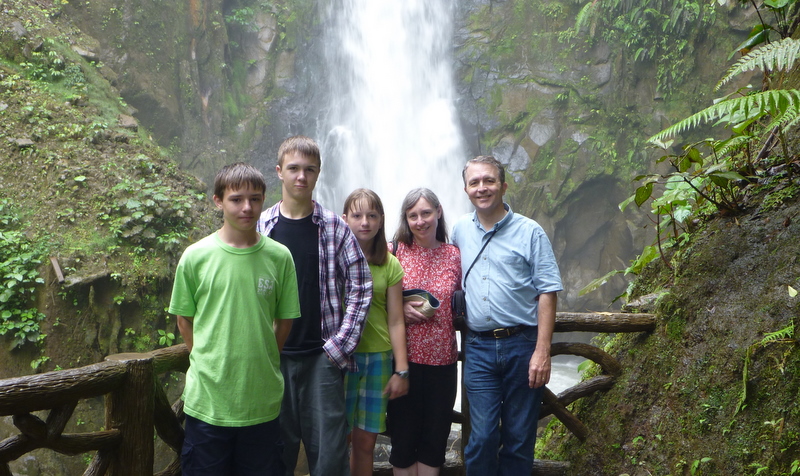 The past week, we’ve been privileged to enjoy our first visit from family since we moved to Costa Rica 6 months ago. My dad, step-mom, two brothers and a sister came and stayed with us for 6 days. It was great to see them again and to spend time together seeing this beautiful country – not to mention the many hours we spent playing foosball! Everyone had a great time!

Since time was short, we packed it with a lot of fun activities, including a couple of our favorite spots here as well as some places we haven’t been to yet. We were blessed that the weather agreed with us perfectly and gave us lots of sun for the activities that needed sun. We did run into some crazy patches of fog, and a bit of rain on a couple afternoons. But we were usually on our way back home by that time so it didn’t interfere. 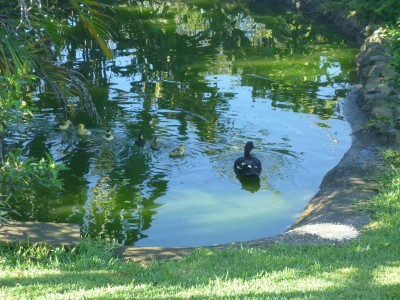 We had great food as well, eating gourmet breakfasts cooked by Jen who got up before 6 every day to make them. She made several Costa Rican dishes like gallo pinto and empanadas, and some others like pancakes (with strawberry syrup), blackberry crêpes, and omelets. Every other meal we ate out at restaurants with great prices and delicious food, including trips to the Grecia farmer’s market, ice cream shops, and Café Delicias for their cinnamon rolls. I especially recommend the pineapple batido at Tica Linda on the way to Monteverde.

The day before my family arrived, we also witnessed the arrival of six new baby ducks at our house! It’s so cute watching the little yellow and black troop follow their mother to the pond for a swim. I am sure we are going to enjoy watching these little guys.

So, here is a summary of all we did on the trip. 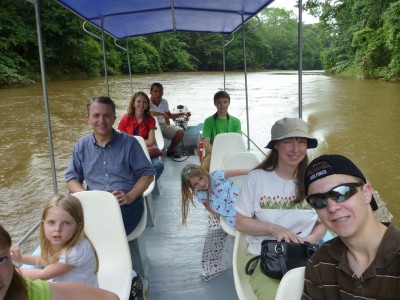 On the boat in Rio Frio

The first day we went to Caño Negro Wildlife Refuge (or rather, a boat ride down the Rio Frio). On the way there we stopped at Zarcero to see the cool topiary, and at Muelles to see dozens of large iguanas sprawled out over the trees on both sides of the bridge. The boat ride was great, too. We saw cayman, turtles, two types of monkeys, and several different species of birds. It was about a 3 1/2 hour drive from Grecia, though, which was about an hour longer than Google Maps said. But we didn’t mind so much because the drive was beautiful! Lots of green rolling hills, interesting trees, and fresh, warm air.

As a tip I got from Doin’ Costa Rica, we bargained down the boat price a lot. Some tour companies will charge $60/person for this tour. We ran into a boat driver who wanted $20/person, which for 9 people would have been $180. After some haggling and also telling him I know someone who rented a boat for $50 flat (regardless of how many people), he agreed to drop his price to $80/flat, and I agreed. I probably could have gone cheaper, but $8.88/person isn’t bad for a cool 2 hour boat ride. 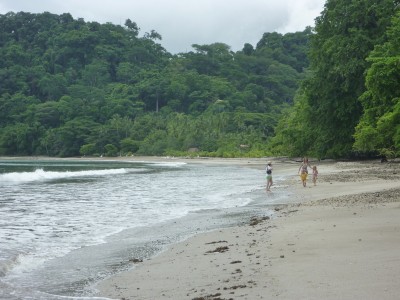 The next day we went to Playa Manta, a secluded beach on the pacific coast that’s part of the Punta Leona hotel, that Denny from B&B Grecia told me about. It’s a beautiful beach in a little cove surrounded by green hills and trees. It also had a little freshwater stream running out to the ocean, which was great for rinsing off in afterward. The water wasn’t quite as warm as I remember it being in Manuel Antonio during the dry season (like a bath tub), but it was certainly comfortable enough to swim in, and we had a great time playing in the waves, as well as walking along the shore. We were basically the only people there, too, besides a couple local guys who went fishing out in a boat. On the way back from the beach we stopped at Tarcoles bridge to see the crocodiles. Fun stuff. 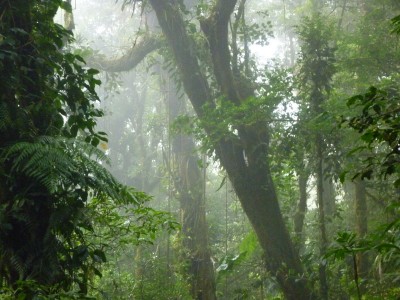 The other two things we did I’ve already written about from previous visits. Check out my posts on Monteverde Cloud Forest and Poás Volcano and La Paz Waterfall Gardens. This time, however, we actually saw the howler monkeys at Monteverde (not just heard them like last time). They were also very close to us – almost within arms reach! And at La Paz, we didn’t get to hold a red-eyed tree frog (the lady there wouldn’t wake one up for us). But we did walk to the waterfalls, which were pretty spectacular. It was neat to be able to see the waterfalls not just from the bottom, but from the top and from behind as well. We also saw some interesting birds I hadn’t noticed before. 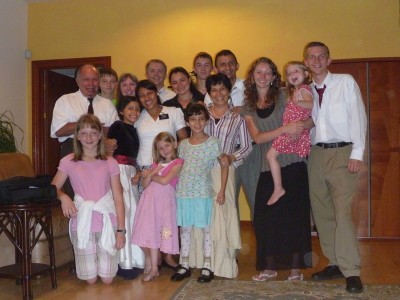 My family also came with us to church on Sunday and really enjoyed it, even with the language barrier. Just before sacrament meeting started, President Bustillos asked my dad to sing a solo during the meeting, so he quickly picked a hymn and we pulled something off (he sang and I played the piano). With some inspiration I’m sure, my dad actually ended up picking Pres. Bustillos favorite hymn, “O My Father” and sang it beautifully, of course. After church, I directed the choir in Spanish, which my dad also really seemed to enjoy, being a choral director himself. It was fun to have them there.

We all came back to our house after church for some lunch. The Bustillos Family and the missionaries joined us and we had a great feast of rice, beans, chicken with tomato sauce, two types of salads, papaya shakes, star fruit shakes, and fried plantains. Then we had a series of foosball matches, all of which were won by President Bustillos who seems practically unbeatable. I will get him one day…

Another highlight of the trip is when my Dad and Robin took Jennifer and me out to dinner one night for our birthdays. We left the kids at home, so were able to have a nice talk with just the four of us. It was great! We were going to go to Complejo Los Arcos – a fancy restaurant by our house with beautiful views – but it was closed, so we headed to town to go to Galería, which was fantastic. My dad said it was the best Fillet Mignon he’d ever had. I would add it’s probably also the cheapest, even though the prices in Galería are more than double most Costa Rican restuarants (ie. $12 instead of $6/plate.) We all had some ice cream with the kids when we came back home.

We had such a great time with our family this week, and are so glad they could come visit us. It’s also interesting to me how relationships can seem to deepen so much more when you’re living and playing together for several days straight, than when you’re only seeing each other for a couple hours each month, which is what usually happened when we lived within 15 minutes of each other. I actually feel closer to my family now than I did when living close to them. Isn’t that interesting?

Enjoy the pictures and videos below.

The family at a waterfall

On the boat in Rio Frio

Dad and John at Monteverde

Kids in the ox cart

Playing at the restaurant

Matt with a Toucan

Cool beetle at our house