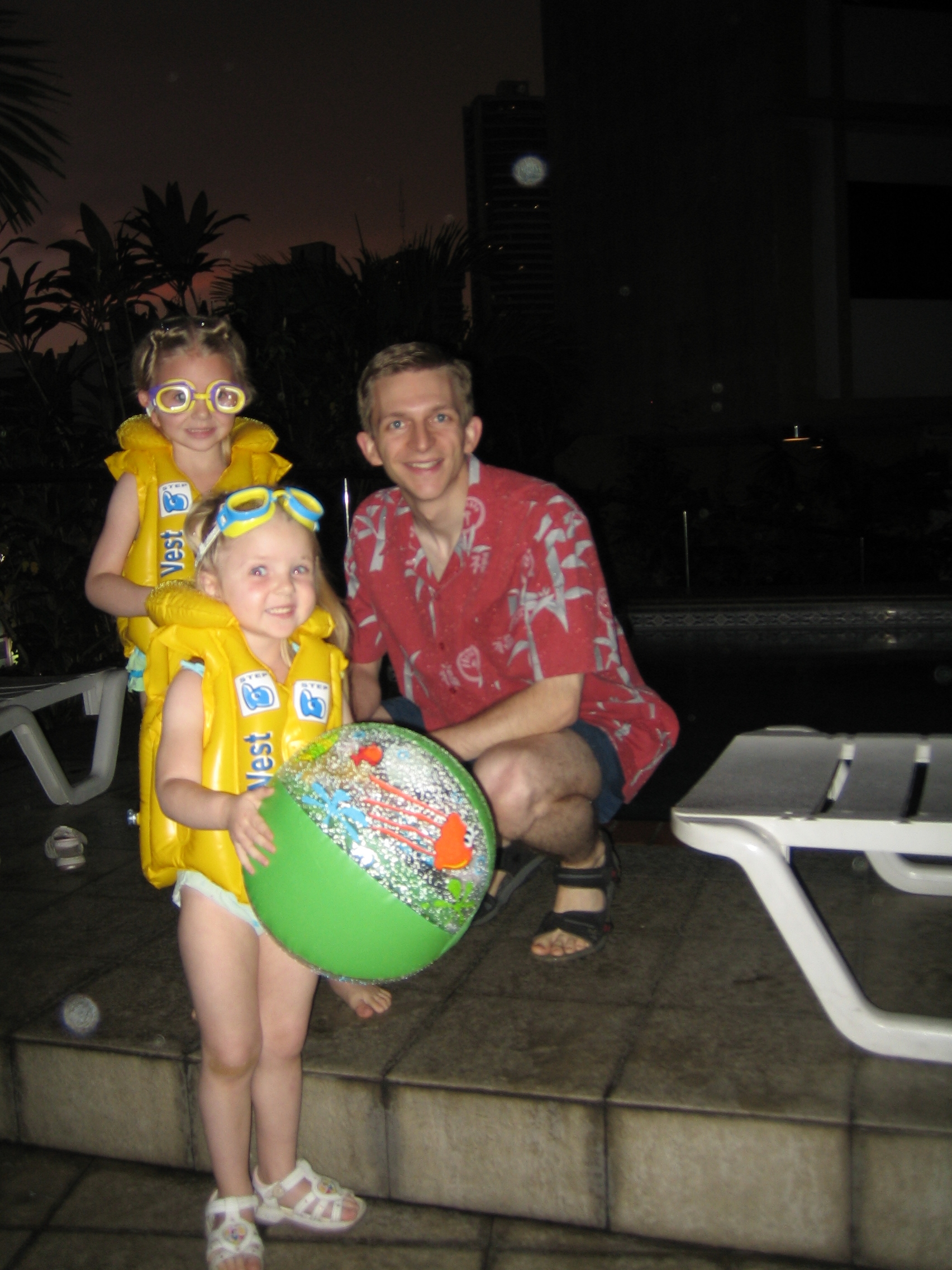 All ready to swim!

Friday night, we took the girls swimming in the pool that’s at the hotel. They were so excited to go swimming. We even bought them inflatable life jackets, goggles, and a beach ball to play with.

However, when it came to getting in the water, they were absolutely terrified! They didn’t mind sitting on the edge to splash their feet, and maybe taking a step or two down into the water, but if I tried to take them more than that, they screamed like they were going to die! Loud enough that I’m sure even those on the 13th floor heard it, and maybe even the hotel across the street (it’s an outdoor pool).

We tried talking to them about fears, assuring them of safety (they had life jackets on and I promised to hold them) – but to no avail. They wouldn’t go in more than up to their waist. After about 15 minutes of this, we realized they weren’t going to go swimming on their own, so we chose to use some parental force. I picked up Emily and swam around the pool with her. She screamed the whole time.

Finally, I let go of her, and she simply bobbed there in the water, with no problem at all. I tried to point out that she was safe and floating all on her own, but she was too hysterical – screaming and panicking – that it just didn’t seem to register. She demanded that I hold her, and after I held her again, she started calming down a bit. I held her close and swam around the pool with her a bit more, but she just wanted to get out.

Finally, as we came within a few feet of the stairs where she started, I let go of her and told her to swim to the stairs. And you know what? She actually did it! (She couldn’t wait to get back to land). But once she did that, she was really excited that she could swim that far, and wanted to do it again! But she didn’t want me to take her much further than the stairs. We did that a few times, and then I kept taking her back further and further and having her swim to the stairs.

Emily and Daddy in the pool

Eventually she felt comfortable swimming to the other side of the pool to get the beach ball which had floated over there. I swam next to her, and before long, she felt comfortable swimming all around the pool by herself! We were so proud of her. Now she says she loves swimming, and that it’s so fun! It was so cute to see her jumping off the steps into the water all on her own. What a change from an hour before! I’m glad she’s not afraid anymore.

At first, Marie was also terrified and screamed horrifically. But once she saw that Emily was enjoying it, you could tell that Marie really wanted to do it, too. She would come down the stairs a few steps, then back up. And she would do that again several times, but not go down to the third step. Finally, I knew that she wanted to but that she was just scared, so decided to try the same technique I used with Emily. I picked her up and put her just at the end of the stairs and told her to swim back. Instead, she panicked, and plopped her head forward into the water, getting some up her nose. This really freaked her out, and she continued to scream.

So, after that, she continued to get her feet wet, but made sure I wasn’t going to pick her up again. She wanted to do this by herself. Marie didn’t make it all the way in the pool that day (except when I carried her across earlier to get her beach ball), but maybe she’ll get it next time – she really wants to. The next day she even told me, “Daddy, I promise I will swim today.” It was dark by the time we left the pool, and it was a little chilly with the wind. Next time we’ll go during the day when it’s hot.