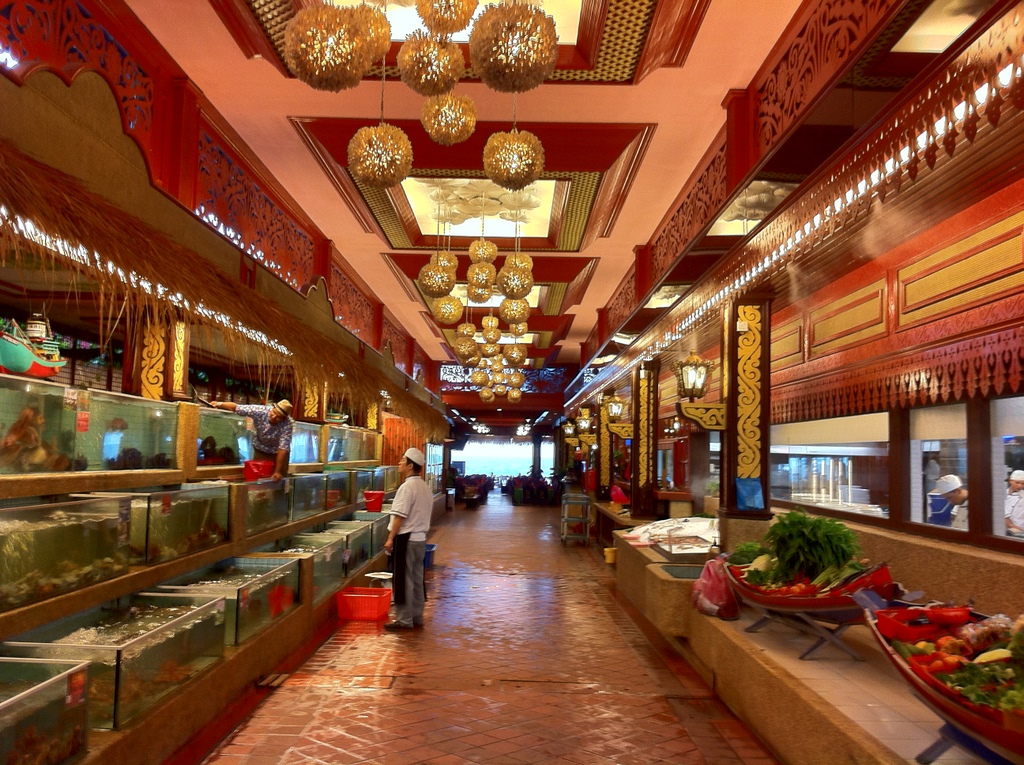 Well, we’re here! We’ve been enjoying Penang, Malaysia for about a week now, and while we’ve mostly spent the time getting settled, cleaning and organizing the house, and trying some delicious food, it’s been a great adventure and in this post I’ll share my first impressions and some pictures.

First of all, it’s a lot hotter and more humid here than I expected. It reminds me of Tokyo in August. During the day, it’s difficult to be outside for very long, or I start sweating. It also gets hot inside the house, so we’re very glad for the air conditioning. 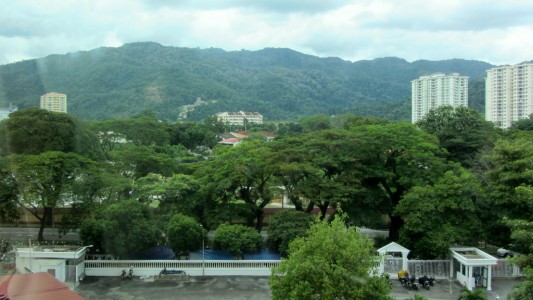 Penang is very built up along the coast, with high rise hotels, apartment buildings, and shopping malls filling out the landscape. Still, the large tree-covered hill in the middle of the island provides a nice backdrop to the cityscape anywhere you stand. There is little development on the hill itself, and you can regularly spot monkeys in the trees along the road to Batu Ferringhi, where we’ve chosen to settle for the next few months. With the mountains on one side, and the ocean on the other, it’s quite a lovely drive, despite the narrow curving road and tall buildings covering up the green. 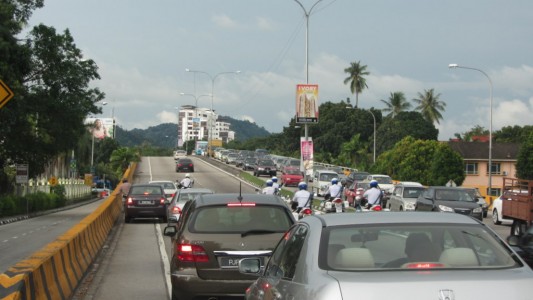 At first, I was terrified of driving on the left side of the road, and having the steering wheel on the right. But after a few days, it’s started to feel more normal and now I’m only slightly nervous when I drive. It’s a little more crazy than Costa Rica, with lots of motorbikes weaving in wherever they can, and cars that don’t signal or follow traffic rules. In fact, I can’t remember seeing one speed limit sign. I don’t think the traffic rules are really enforced here. But the lanes are generally well marked, and there are even signals letting you know when it’s safe to do a u-turn.

Penang is most famous for its world-class cuisine. The food here is supposed to be among the best and cheapest in all of Asia. We’ve only barely scratched the surface of it — there is so much to choose from — but so far, we’ve had everything from mediocre to fantastic Indian, Malay, and Chinese food — all of it at rock bottom prices compared to the U.S. or Costa Rica, where we’ve been living. A typical meal here runs about $1-3 USD in a hawker stall (like a food court) or a normal restaurant. At more upscale restaurants with really nice atmospheres, you might pay $4-10/plate, at least from what I’ve seen so far. 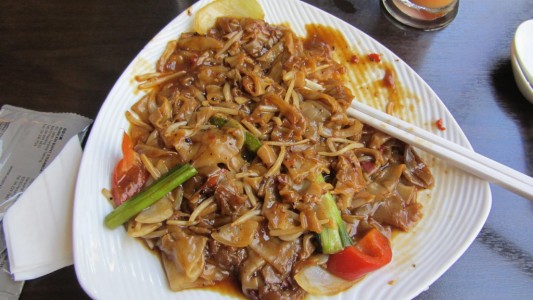 Some yummy Chinese dish -- I think it's "hor fun."

We were also amazed at the incredible selection of food in grocery stores. They have so much more variety than I’ve seen in any store in my life — I have no idea what most of it is, but I’m very happy they have some things I missed in Costa Rica, like raspberries and blueberries. They also have dozens of different kids of rice, rows and rows of fresh and dried fish, more spices than you can imagine, and so many varieties of vegetables and fruits, all at rock bottom prices, compared to what I’ve been paying. We’re in food heaven. 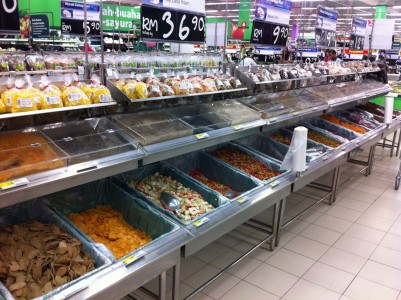 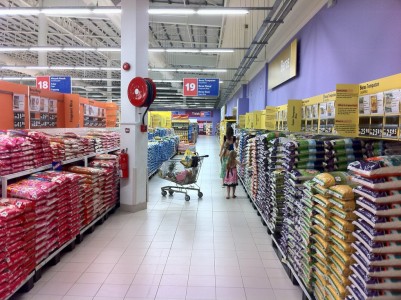 One day, Jennifer and Tracy (who we’re renting the house from) went to an Indian-Chinese cooking class taught by a sweet Chinese lady named Pearly. They made potato masala curry, butter chicken, green mango salad, and some delicious fried rice (best I’ve ever had). It was all heavenly and I’m so glad we all got to go eat it for lunch at Pearly’s house. 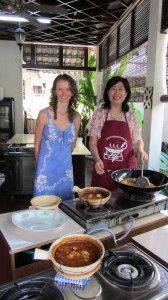 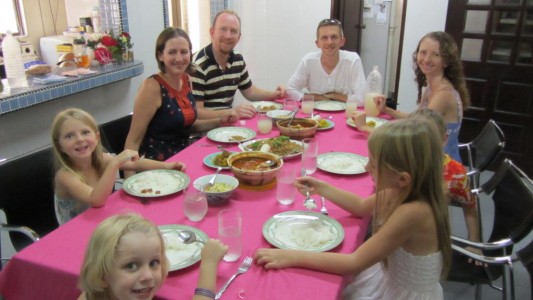 The people in Penang are culturally diverse. In the same street or store, you’ll see muslim women covered from head to toe in black, Indians in beautiful colored gowns or intricately patterned puffy pants (nice alliteration, eh?), and the Chinese dressed in more western garb. We’ve received smiles from all of them. We’ve also had no trouble communicating with anyone in English. Some people have stronger accents than others, and only know enough English to get by, but most speak it rather well. We’re still planning on taking some Chinese classes and learning more Malay.

We’ve also been able to make some friends. On our street, I played badminton with a cute 9-year-old Indian boy named Vyshya, and talked with his sweet parents who run Annie’s Homestay guesthouse. We were also invited to a Chinese wedding reception held a few houses down from us, with some excellent Chinese food; my favorite was the sweet and sour fish. Although it felt awkward having all Chinese eyes gaze upon us as the only westerners at the dinner, it was nice to be invited by our friendly neighbors. We’ve been introduced to a few expats as well, who live a little further away, so we’re happy that we don’t feel alone here. 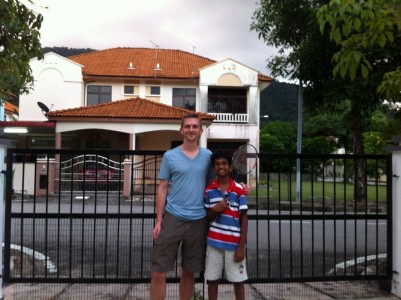 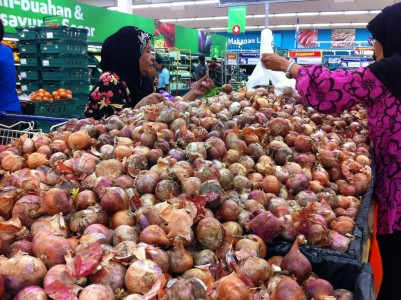 On Saturday, we went to the Penang International Kids Storytelling Festival. It was held at the Straits Quay shopping center, and they had tents set up outside where storytellers were telling stories to children and adults in both English and Malay. There were traditional puppet shows with Indian-sounding music, and booths set up to sell everything from organic soaps and clothes to children’s books and 3D puzzles (we bought a 3D puzzle of the Petronas Towers). 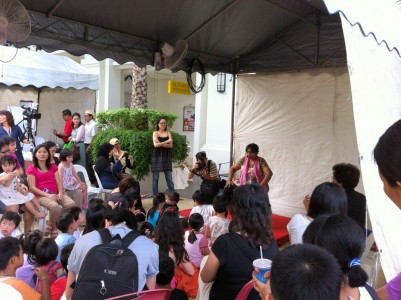 There is plenty of shopping in Penang, with large, modern shopping centers as well as the touristy stuff by where we live. You can find anything you’re looking for rather easily, from electronics to furniture, and more. You can even find sheep placenta extract. 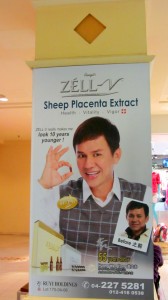 We’ve visited two shopping centers so far, the largest of which is Gurney Plaza, a giant 7-story mall about 15 minutes from our house. Here’s a picture of a small part of it inside. 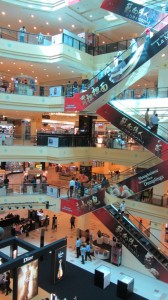 7 Stories of shopping at Gurney Plaza

Oh yeah — and the ice cream here is REALLY good! 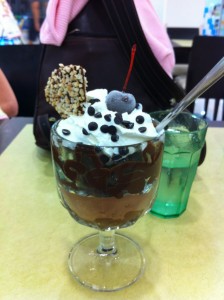 Check out the video below for a few more pictures and some video footage.