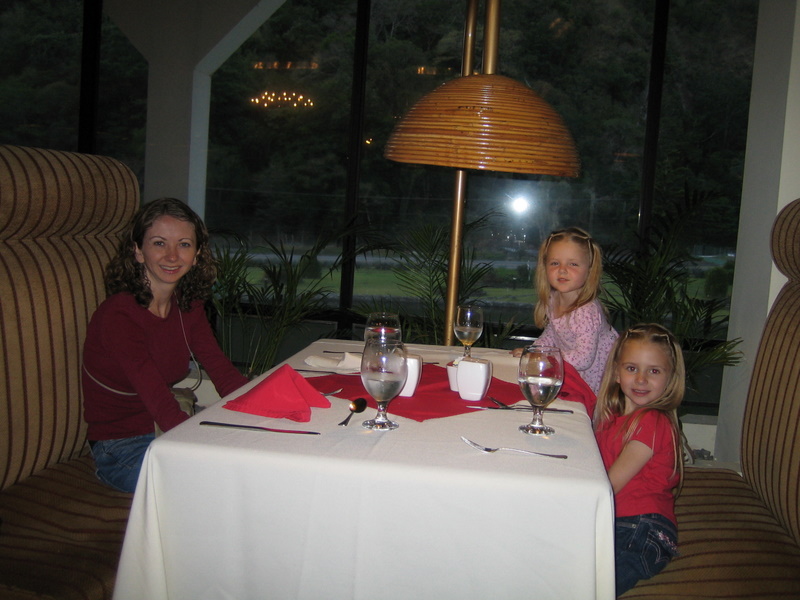 I’m now writing from our very relaxing house on Bastimentos island in Bocas del Toro. I have a few days to catch up on, so let me just say we went to dinner at Cafe Essencia in Volcan on Saturday, and it was not good! (The first “bad” food we’ve had in Panama). The bread was very stale, and fell apart on our sandwiches and hamburgers. However, the raspberry shake was good. So after that, we had a second dinner at Hotel Bambito in Volcan, which is probably the fanciest restaurant in Volcan (actually closer to Paso Ancho). The food and service were both superb! Lovely setting as well, in the mountains. The only thing we didn’t like is the tv in the bar which was playing Spanish rap music during our dinner.

Sunday we went to church again in Volcan (we decided to stay one more night at Las Plumas rather than two nights in David). I got a bit more out of the lessons this week because I had my iPhone dictionary, but the girls chose to stay with us rather than go to Primary. We had a great time there, and said goodbye to some friends we’d met.

We spent the night in Hotel Iberia in David, which was just perfect for what we wanted. They had a decent restaurant, wifi connection, and hot water (after it was running for about 3 minutes).

The small airplane we flew in

The next morning we headed out for Bocas del Toro. We flew on a small airplane from David, which unfortunately wasn’t good for our stomachs. Emily and I both threw up (even though I took some motion sickness medication before we left). There were beautiful views, but it wasn’t a fun ride for us. Jen and Marie did just fine, though.

Once we got to Bocas, we were greeted by Gregorio who’s taking care of the property where we’re staying. We got some groceries, got in his boat, and he took us on about a 30 minute ride to the east side of Bastimentos island. The place we’re staying (Sal si Puedes) is heavenly! It’s so peaceful with the sound of the waves gently rolling in, soft sand all around, and an open and breezy house with light-colored furnishings.

This is where we're staying

When we arrived at our house, another couple workers greeted us and carried our luggage in the house. They then proceeded to work on the grounds. There was a woman in the house who had just finished cleaning. She comes three times a week. There was also a cute little boy who was fascinated by my video camera.

The girls immediately wanted to play on the beach, so we got their swimsuits on. The sand is so soft and the water is warm. It feels great here! It is a bit cloudy though. We haven’t seen the sun since we arrived, and it looks like it will be this way all week, along with some occasional rain. Oh well – at least we won’t get as badly sunburned. :)

It got a little rainy and windy that night, causing intermittent problems with the television and Internet, but they’re working now. The girls also played ball with some neighbor kids in our front yard until it started raining.

Getting ready to play in the water

This house is fully equipped and definitely up to U.S. standards. It even has a large refrigerator and full-size oven, which is rare here. Oddly, it’s missing a microwave.

The girls slept on an air mattress in the living room, and we slept under a mosquito net in our bedroom. We burned some coil by the girls that should keep the mosquitoes away. We also turned all the lights out, and stumbled around in the dark getting ready for bed – we were told that using as little light as possible would keep them from coming. They had some little lanterns but none worked, so the girls brushed their teeth by the light of my iPhone. And I think I only saw one mosquito all night, maybe two. And I’m not sure they were mosquitoes. Maybe it’s not as big of a problem here as they say…

Anyway, we had a great night’s sleep, listening to the sound of the waves and the animals and insects outside. What a beautiful place!

Emily and Marie at Hotel Bambito

Cool tree at the church

Jen and Marie on the boat

Trees growing in the water

Walking on the dock

This is where we’re staying

Jen in the bedroom

Getting ready to play in the water

Emily and Marie in swimsuits

Marie with the ball

This kid was really fascinated by my video camera

Emily swimming in the ocean

View from the patio

Living room and view out the back window

Marie in the water

One of the many lizards on our wall

Flying out of David

The small airplane we flew in

Emily getting in the boat

Brandon and Emily on the boat