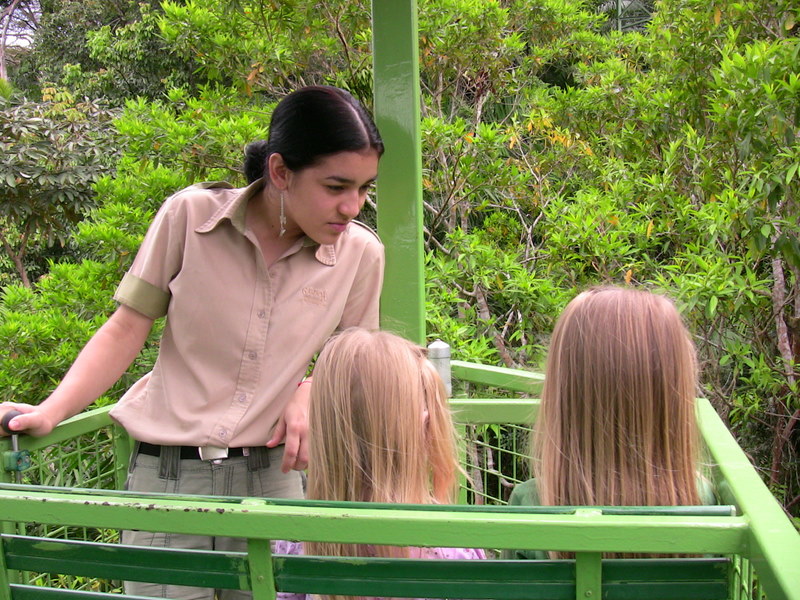 Today we had a nice big breakfast at our hotel. For some reason, I was really hungry and able to eat a lot more food than usual. It felt good to have a large breakfast. We let the girls play on the playground for a bit, while chatting with a woman from Ireland who’s actually living in the Torres de Alba apartments while her husband is here for work.

That afternoon, we went to the Gamboa Rainforest Resort to see the rainforest from above on the aerial tram. The resort itself is gorgeous, built right next to the Chagres river, complete with all the amenities of a luxury resort. However, it’s over $300/night, so we’re not staying there. But they do have a lot of interesting excursions.

Girls in the tram

When we told the girls we were going on the “Aerial Tram”, they got really excited, thinking “Ariel Tram” – as in the mermaid princess from The Little Mermaid. We had to explain to them several times what the “aerial tram” really was. But they still loved it when we got there. They thought it was a magical flying machine.

Since we went in the afternoon, we didn’t get to see much wildlife. No monkeys or sloths or toucans. But we did see a large iguana in a tree (at least a foot long), and several small birds, ants and termites (with their large nests).

Our family on the lookout tower

The views really were spectacular, as you can see from these photos. We walked to the top of a lookout tower and could see the river and boats going toward the Panama canal, and saw what it was like in the tops of the trees in the rainforest. After the tram, we went to a small aquarium and reptile house where we saw some small crocodiles and turtles and fish. Then we went to a butterfly house and saw lots of beautiful butterflies, including some large bright blue ones. Then we went to a house of snakes where we saw some boa constrictors and pythons, among others. (Note: pythons aren’t in Panama naturally, but boas are).

It was a really fun trip, but we were pretty exhausted afterward. We came home and had some oatmeal, leftovers, and pancakes (Jen is so good). We relaxed that night, I blogged, we watched movies, and later Jen made a delicious dinner of sausage spaghetti, garlic toast, broccoli, and a fruit smoothie. We didn’t have to walk the downtown streets at all today!

Girls in the tram

Our family on the lookout tower