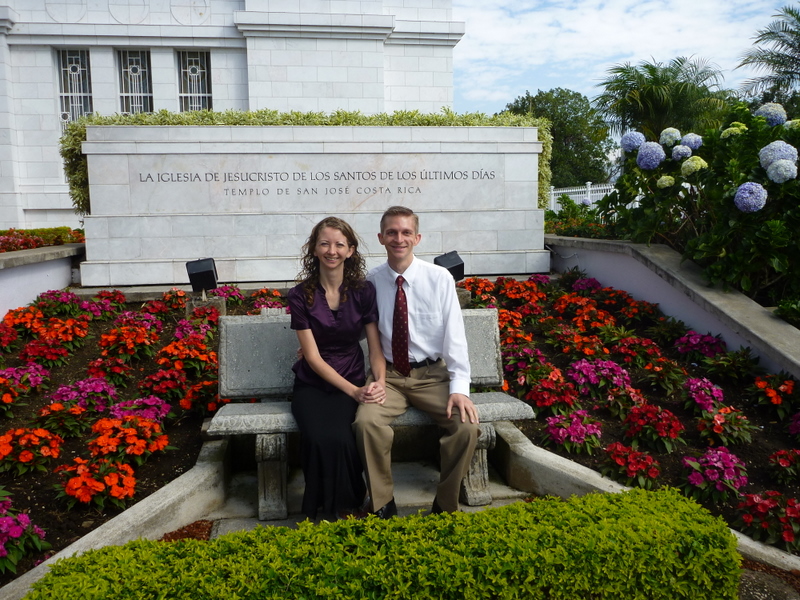 We’ve been living in our house in Grecia, Costa Rica for over a week now and are starting to feel more settled. The plumbing issues have all been fixed, our Internet is working, and we’re starting to get into more productive routines.

Now that we’re “living” here, more than “vacationing”, we’re finding ourselves settling into many of the habits we had before we left (ie. excessive computer use, homeschool, etc.), but life is anything but mundane. Being surrounded by a new language, new people, and nature in perfect weather provides a contrast that keeps life very exciting.

Serving in the Church

We’ve also been called to responsibilities in our church here, which gives us additional opportunities to meet people and to serve. I’ve been called as the 1st Counselor in the Branch Presidency here in Grecia (assisting the Branch President with administration tasks), and Jennifer is the 1st Counselor in the Primary presidency (working with the children). 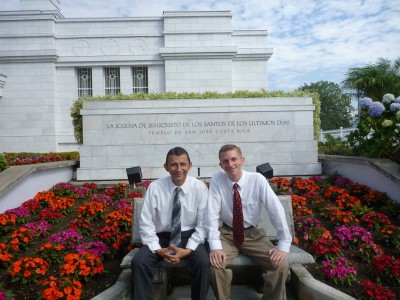 We’ve been spending a lot of time with the Branch President’s family the past while, President Bustillos, and have enjoyed every minute of it. He is very patient with my Spanish and teaches me so much! For example, on Saturday we went to the San José Temple, ate brunch, then went to a district conference. With all of that, and probably 3 hours in the car with him, I spoke and heard Spanish all day long, and feel like I’m learning more quickly because of his help. He’s also quite funny and likes to joke around.

President Bustillos and his wife, Margarita, have two daughters, and although they’re slightly older than our girls, they love playing together. On Saturday, they played while we were at the Temple. Then they played at our house that afternoon, during which time Marie slipped and fell into the duck pond! Fortunately, she had put her swimming suit on a few minutes earlier to show them. She was a little shocked when she found herself in the water, and was a little grossed out by it, but she was able to laugh it off once she got out. 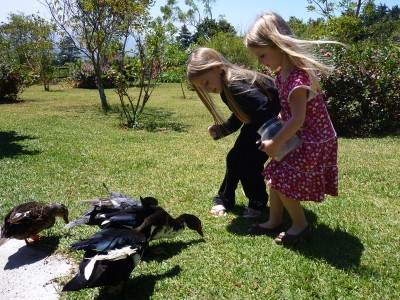 Being without a car at this house has proven to be a little bit of an inconvenience, but not overwhelmingly so. The bus runs once every hour or two, and takes between 30-60 minutes to get to town, depending on the route that hour. It’s really sufficient most of the time, but we have had some occasions we wanted to get somewhere but were limited by the bus schedule. The bus fare is only about 60 cents per person each way. It’s also only a 5-minute walk to the bus stop, but it’s down a steep hill, which isn’t a problem unless we’re trying to carry groceries or other loads back home (or the girls are tired). We have taken the taxi back home a few times, after grocery shopping with almost more than we could carry. However, it costs about $10 each way to take a taxi home, so that adds up quickly if you do it often.

We are considering renting, or perhaps even buying a car, depending on what options present themselves. We’d like the freedom to explore a little more than we can on the bus and by foot. I don’t think we’ll rent from a company, though, because the price of $500-1000/month is a bit steep. It would probably be better to buy a beat-up car for $2500 or so instead (however, even used cars cost twice as much here as they do in the states). Or our landlord has a 2001 Ford Ranger (pickup truck) he’s willing to rent to us for 3 months, for about $330/month. The cab space would be a little small for all of us, but it might do if we can’t find anything else – at least for 3 months. We’ll see what happens. 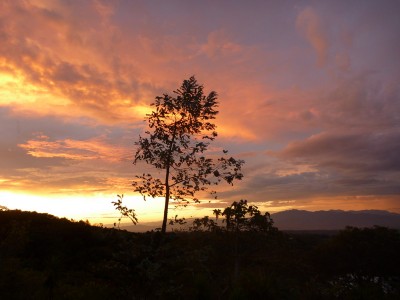 I am still frequently in awe of the views from our house. I usually wake up as the sun is rising (around 6am), and take a few minutes to enjoy the view of the sunrise over the valley before doing anything else. Check out some amazing pictures of the sunrise below (and in the video).

We also love the birds that come around the property. Hummingbirds frequent the feeder we have hanging up, and we’ve seen birds of various bright colors, from red to green to yellow. They come in all sizes, too, from hummingbirds and sparrows to large hawks. We love listening to the birds sing their songs in the morning. And at night, we hear a lot of other interesting noises. We really have no idea what some of these animals are. Maybe you can name the animal that makes the sound in the video (the part where it’s black and showing some city lights). We’re thinking it’s some kind of frog, but I’d really like to know what it is.

We take frequent walks in the garden to enjoy the flowers and feed the ducks. The girls especially like feeding ducks. They’ll even eat right out of the girls’ hands! I think the ducks make good pets because they can feed themselves if you forget, you don’t have to clean up after them, they’re relatively quiet, and they never come in the house.

My Wife is a Great Cook

Jen has made some wonderful food this week, including scones three times. Once she even filled them with apples and cheese. (Check our her recipe here!) They tasted like delicious donuts! Irma, our maid, has also taught Jen how to make some traditional Costa Rican dishes, like casados (rice and beans with meat and salad and fried egg), and empanadas, which we’ve enjoyed as well.

It’s been really nice having Irma’s help with the cleaning, too. She cleaned the basement this week and it smells so much better now! We can finally stand to go down there, and would no longer be embarrassed to have guests stay there.

We’re loving it here and are so glad we made this move. Even though we’re doing many of the same things that we did in Utah, it feels different. We’re learning more because our surroundings and our experiences are different. We’re meeting new and interesting people, and and seeing life from different perspectives. I’m so glad we’re here.

Brandon and Jen at the San Jose Temple

Jen and Brandon at the Temple

Why I Can’t Leave the Church Alone