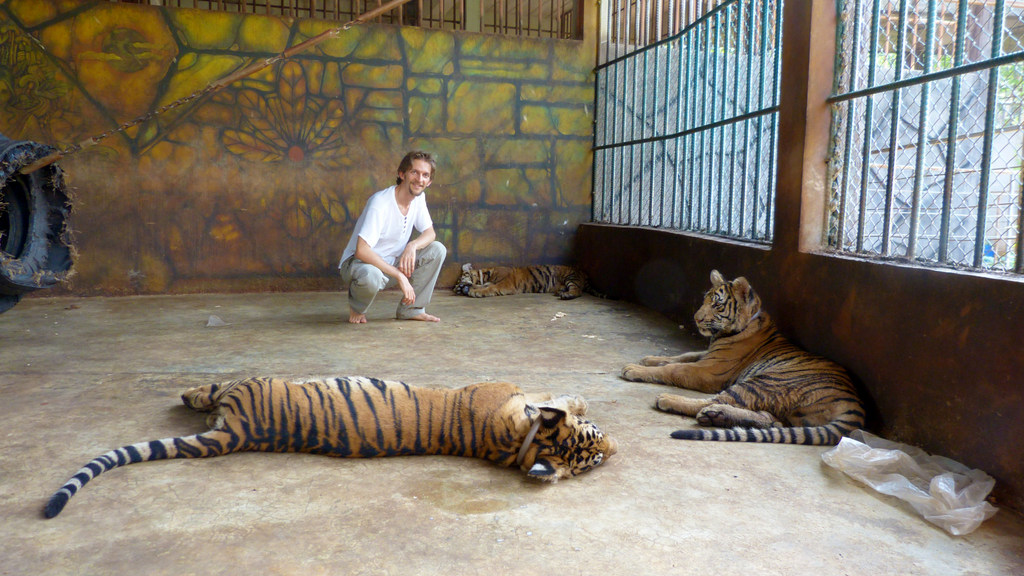 We recently had a wonderful week in Bangkok, and kept busy with plenty of fun activities. Here are the highlights:

I’m in love with Thai food! Ever since we got to Thailand, I’ve been eating curry at least once every day. The taste and quality vary with each restaurant, but my favorites so far have been the red curry and masaman curry. I also enjoy the green and yellow curries, tom yam noodle soup, pad thai and mango sticky rice. Yes, the food is often spicy, but most restaurants are willing to reduce or even eliminate the spice if you ask them. (Just say “mai pet” which means “not spicy”). However, since moving to Asia, I’ve developed the ability to handle a bit of spice, and do enjoy it when it’s not overwhelming. I’m looking forward to another few weeks of Thai food as we explore other parts of Thailand.

While in Bangkok, we went on a walking food and culture tour as well, where we tried several delicious dishes I never would have ordered on my own. On the tour, we also learned about Thai Buddhism, and that every Thai male is expected to become a monk for at least 3 months when they turn 20 years old. During this time, they follow 227 rules such as no dinner (they can only eat breakfast and lunch), no talking to women, no touching money (for some monks), and waking up at 4am each morning. Oh, and they must “abstain from the use of high and large luxurious couches.” Sounds like it could be fun… at least for a few days. I don’t know how long I can handle being without a luxurious couch, though. ;)

Probably the most impressive set of buildings in Bangkok is the Grand Palace. Little pieces of colored glass and mirrors are intricately placed like mosaic tiles around carved golden pillars, statues, and more. It’s a truly breathtaking site.

We didn’t know that it closes at 4pm, however, so we only got to enjoy it for an hour, but we all could have stayed much longer. There was so much to see. We did take a few minutes to meditate silently in front of the “Emerald Buddha” statue sitting atop meters of golden decor. And there were a few other impressive buildings outside of the main palace area around a nice strolling park.

About 2.5 hours from Bangkok by car lies the Tiger Temple, where monks take care of over 100 tigers and many other animals such as water buffalo, deer, bears, and more. But the amazing thing about this place is that visitors are able to interact with the tigers one on one. We got to pet large sleeping tigers, and see them play in the water with each other. But our favorite part was playing with a 6 week old tiger cub for about 45 minutes. She romped around the room like a puppy, chewed on our legs (ouch!), and was lots of fun. It was an amazing and unforgettable experience!

We also learned that tigers have a very slow digestive process. In the wild, they usually gorge themselves on a meal, and then rest for several days without eating. They don’t generally attack humans, but we usually see them as vicious because that’s when they come out of hiding. Here in the temple, the tigers are fed every day, so remain much more consistently calm.

Note to those visiting the Temple: There is a dress code. Be sure to have your knees and shoulders covered, and don’t wear red or other bright colors. We had to purchase a couple t-shirts at the door.

Update: We have since learned that some of the tigers were being sold by the monks on the black market, so this may not be the most ethical place to see tigers.

There are many markets and malls in Bangkok. We just visited a few. The biggest street market in Thailand is Chatuchak weekend market, which covers 35 acres and has over 5,000 stalls both indoor and outdoor. It was HUGE! We only explored a small portion of it, but enjoyed browsing through the goods, tried some street food and treats, and even bought some clothes at low prices.

Another day we went to Central World mall and had fun exploring the shops, relaxing in the massage chairs, and watched “Frankenweenie” in the theater (which we enjoyed a lot more than we thought we would — quite a clever spoof on all the old monster movies). Nearby (next door to the Indonesian embassy where we also spent some time) is a multi-level mall dedicated to computers and electronics. And next to that is an even bigger mall full of almost nothing but clothes. It can quickly get overwhelming. Jen and I also discovered that our passports had been filled up with stamps, so we went to the US embassy to get some new pages, which we did on the same day as these malls.

From Bangkok, we took the night train to Chiang Mai, and had a good night’s sleep. Emily picked up the first Harry Potter book at a book store and had finished the entire thing in three days! We found a used bookstore in Chiang Mai where she sold it and bought Book 2, along with a book of Hans Christian Anderson fairy tales. It’s fun to see her enjoying reading so much.

Here are a few more pictures and videos of our time in Bangkok for your delight and immense satisfaction, I’m sure.