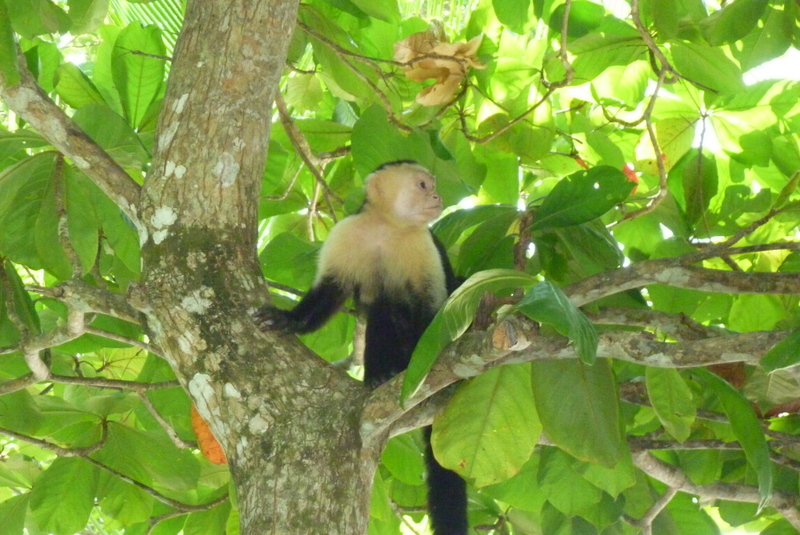 Our fun vacation along the Costa Rican Pacific coast is now over, but we are loving it here in Grecia. We’ve been without the Internet for a few days though, so I’m a little behind in writing. I’ll do my best to catch up here. The last three days of our trip were spent in Manuel Antonio. 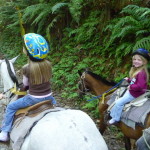 The girls love horses and have wanted to go horseback riding for a long time. So we took them on a horseback riding tour through the forest/jungle. Since Jen and I have both never ridden a horse by ourselves before, this was the first time for all of us.

The girls each got to ride their own horse, and they did great! We didn’t go much faster than a slow trot, but it was a lot of fun. The guide led us on a one hour ride up to a natural pond/swimming pool, where we cooled off from the hot sun. We then rode the hour back, slightly faster than the ride up. The horses were anxious to get back to the barn.

It was fun to ride a live animal with a mind of its own. They knew where to turn, and were good at following directions. They also got hungry and wanted to eat the plants and drink from the stream, which was fun to watch. It was a pretty bumpy ride, though, and it gave us a lot of appreciation for modern forms of transportation. Jen was probably the most sore our of all of us, after the ride.

The tour company also fed us breakfast and lunch. Both meals were typical costa rican “casados” and were good.

We played at the beach a little bit that afternoon, but being high tide, it wasn’t quite as fun as the last time. Also, while standing in the waves, Emily lost her shoe in the ocean! We looked for a while, but couldn’t find it. We had just bought her two new pair of shoes three weeks earlier. And the other pair is already falling apart. So we will be buying her more shortly. I’ve never seen her go through shoes so quickly! 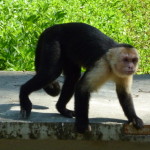 Our last full day on our trip, we went to Manuel Antonio National Park. We were staying at Hotel Manuel Antonio, which is right next to the park entrance. Before we entered, some monkeys had made their way to the trees near the hotel, and we enjoyed watching them jump around and try to pick up coconuts. We also saw an iguana, which Marie chased around for a minute. You can see this on the video below. A very good start to the day.

The park costs $10/person for non-residents (which is us, since we’re on tourist visas), but the kids were free. They had tour guides that you can hire to go with you to show you the wildlife and teach you about what you’re seeing. But at $25/person, we thought we’d rather explore it on our own, and at our own pace. 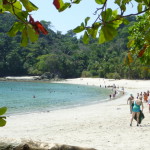 After a lovely nature walk through the park, we came to a pristine beach. We swam in the water, saw some beautiful blue spotted fish, heard howler monkeys in the trees, built a sand castle, and pretended to be sharks chasing the girls. Then they became the sharks and chased us!

After swimming for a while, we took another nature walk through the jungle and saw more monkeys and iguanas, as well as beautiful trees and ocean views. We finally came to another beach and played there as well. But it was getting to be high tide and we were hungry, so we didn’t play long. We exited the park, and found a nice pizza restaurant for dinner. 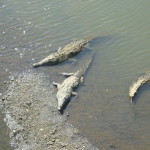 The next day, we headed back to Grecia. We got a late start, but drove fast and made it from Manuel Antonio to the car rental place in Alajuela in 2.5 hours. This included a brief stop at the Tarcoles Bridge to see the crocodiles at the bottom. There were dozens of large crocs underneath the bridge just waiting for some food. We heard about some crocodile tours where they take you out in a boat, feed the crocodiles right in front of you, and even bring a cayman into the boat for you touch! We didn’t do that yet, but maybe another day. Maybe. 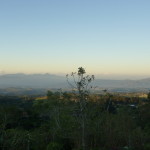 Rolan came and took us to our new house up in the hills of Grecia. He let us stop in town first to pick up a few groceries and supplies, which was nice. We got to the house just before the sunset, and the views were so beautiful! The night views of the city are great as well. We are going to love living here!

The next morning, I was awakened at about 5:30am to the sound of happy bird songs. I got up to watch the sunrise over the valley, smell the flowers in the air, and see the birds in flight. What a breathtaking sight! I was so overcome, I had tears streaming down my face for several minutes. What a beautiful and magical world we live in! I’m so glad I get to be closer to nature here, and I can’t believe I get to stay in this house for a whole year, and see this sight every day! I feel so blessed.

There are a few problems with the house, however, which I kind of expected, being in Costa Rica, where everything happens “mañana”. But compared to my ideal, here is my nit-picky list of things that aren’t quite right for a fully furnished rental:

These are the main issues we’ve had so far, and all of them will hopefully be resolved soon. Fortunately, none are a huge deal (except the Internet and shower), and the shower should be taken care of this week. We’ve been taking the cleaning into our own hands, and spent the first few days doing a lot of it. We’ve also hired a maid to come on weekday mornings and help out, since there will continue to be a lot to clean.

Rolan was able to get me a cell phone line for my iPhone on Saturday, including Internet (3G), which is great to have! We also have a landline phone at our house for local calls. He should be getting a remote control installed for the gate this week as well, and eventually a doorbell with a video camera so we know who and when someone is visiting us without them calling us on their cell phone.

All in all, we are loving living here. The weather is just perfect! We don’t have a heater or air conditioner because there is no need for one. It’s nice and cool in the mornings and evenings (maybe 60-70), and it probably gets up to around 70-80 in the daytime. Today is a little cloudy so I don’t think it got much above 70. It feels wonderful! Anyway, enjoy the video and pictures below.

Emily on a horse

Jen on a horse

Swimming in the natural pool

Family at the pool

Me on a horse

Monkey in a tree

Swinging on a vine

Marie with our paintings

I love this view

Night view from our house