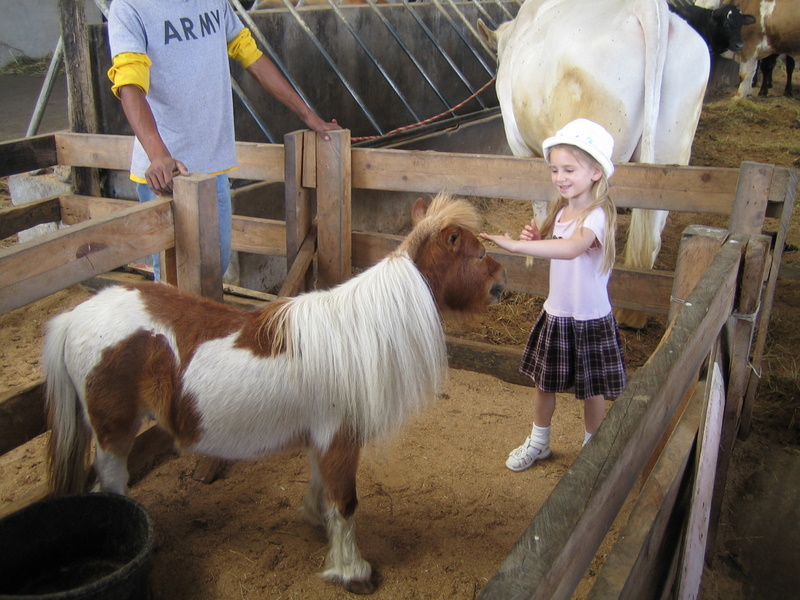 Monday morning I woke up early and got a fresh start on the day with some tai chi before anyone else was up. I also got some work done in the morning, and it felt good to get caught up a bit more.

That afternoon we went to Finca Guardia (Guardia farm) to ride and see some miniature ponies they have there. When we found the entrance, we realized there was no way our little Yaris would make it up the rocky hill, so we decided to take the 20 minute walk. Fortunately, a kind family from Panama City drove up after us in an SUV and offerred a ride to the farm.

The ponies were very cute and small. We also got to see a baby donkey that was born the day before, and even hold some baby goats that kept saying “MAAAA!”. The girls loved them. Emily was sad, though, because she wanted to ride the ponies, but unfortunately, the ones you could ride were already being used.

This week is Carnival, but we’re seeing no celebration of it in Volcan, which is probably a good thing as I hear it gets rather crazy in the city.

Marie getting her hair cut

For a snack after that we had some chocolate cake at a pastry shop. Then we each got a haircut at a place called Evi’s, which is run by a woman who cuts hair out of her house. She was really sweet. It only cost $2-3 per cut, so all four of us got a haircut for only $10 total! She did a great job, too.

That night we went to Don Tavo restaurant (I think) where I had some creamy and delicious tomato soup, Jen had some pasta with sausage and the girls had chicken fingers. Then we came home and watched Spanish cartoons together and ate some chocolate ice cream we’d gotten from the grocery store. It’s wonderful and creamy and rich (and probably not healthy). It’s mixed with marshmellow – kind of reminds me of “Brownies on the Moon” (my favorite), but with a little better chocolate and no brownies. Mmmm…

Marie getting her hair cut