How My Stolen Computer was Recovered

I’m pleased to announce that thanks to the free software at preyproject.com, and the efforts of the OIJ (Costa Rican FBI), the local police, and some good friends, I now have one of my Macbook Pros that was stolen a couple weeks ago! So, what happened? Here’s the scoop.

Guy at work with my Macbook

About two weeks after the robbery, I started receiving email reports from Prey that someone was using my computer. It looks like the thieves hadn’t formatted my computer after all. They had simply wiped out my user account. I knew this because first, prey was working, and second, I saw my old printers that would have been removed in a reformat. Prey sent me photos of the user and screenshots every 10 minutes, along with a map (which was fairly inaccurate), network information, and some other cryptic technobabble.

From the screenshots, I was able to determine the person’s name and email address. I then searched online and found his Facebook page, where he works, and eventually his phone numbers, home and work address. I admit that it was kind of fun to spy on the guy, to see what he was doing on my computer, and the funny expressions he had staring at the screen. The photos also revealed that he was working in an office, and was an architect.

I first called the police in Escazú, who were very proactive, and were at my house in just 5 minutes. When I told them about all the information I had, they were a little suspicious, until I showed them the software. At that point, they were very impressed, and they wanted me to help them get it on their computers, too. Over the next few days, I got frequent calls from the police asking for more information about where the guy was, as they were ready to pounce on him. However, I was later told by others that this kind of situation is a job for OIJ, not the police, although I’m still not exactly sure why. I did file my original report with OIJ, though, on the day of the robbery. 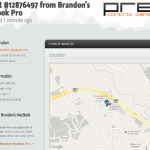 On the guy’s Facebook page, I also saw a link to a 13″ Macbook Pro that looked exactly like the other one I lost. So when I gave all of this information to OIJ, they were concerned that he might be dealing in stolen goods, and wanted to make sure we got as much information from him as possible. OIJ contacted him asking to buy the 13″ Macbook, but it turns out that he was only looking to buy that computer, and then decided on mine instead, so he didn’t know the computer was stolen. OIJ then determined to get the computer the next day. However, the next day, he took it back to the store where he purchased it. It looks like he took it back because the battery doesn’t hold a full charge anymore. I have pictures and maps that show all of this as well.

New guy checking out my computer in the store

That same day, just hours later, someone else purchased my computer from the store and took it home. So I had to start the research process over again. This guy jumped right on Facebook. In fact, I never saw him do anything else on the computer besides Facebook. But I was able to figure out from there his full name, and where he worked. OIJ called his work and got his home address, then went to his house and took back the computer that same day. He was pretty shocked to see OIJ at his house, but they had the photos from Prey showing him using my computer, so he understood that it was stolen. He’s going to have to try to get a refund from the store. Poor guy.

So the main questions at this point are, how did the store get my computer? Most likely, the thieves from Puerto Viejo sold it to them. But the store is denying this and doesn’t have any records for where they got it (conveniently). I’m hoping that OIJ will keep a close watch on this store, so they can catch the thieves. There is a chance they have my other computer or iPads as well. I’d have to go and check serial numbers to find out.

Today I was able to go to OIJ and pick up my computer. It took about an hour of waiting for them to fill out reports and get authorization, etc. But I did get it. They didn’t have my charger cable, though, so I may have to replace that. But the computer is a lot cleaner than when I had it. It looks like the store wiped it down to look like new, so I appreciate that. I also found that all my old programs were still on the computer. They had just been hidden so that no one could find them. Of course, all of my “Documents” were deleted, so it will take some time to get the computer back to where I had it.

Also, I didn’t know the new admin password for my computer, since it had been changed. So I had to hack into my own computer in order to have full access. It was actually pretty easy. Here are the steps to hack a mac, if you’re interested. You can make this much harder to do by creating a firmware password.

Overall, I’m very happy to have my computer back, and very pleased at how responsive the police and OIJ were. My Tico friend Kincho, who’s brother used to work for OIJ, was a huge help as well, in communicating and making sure everyone understood what was going on.

Also, after working on an 11″ Macbook Air for a couple weeks, I’ve decided I like the smaller lightweight computer more than the Macbook Pro, and it’s plenty fast for my needs. So my next computer will probably be a 13″ Air, and I will sell this larger 15″ Macbook Pro. Smaller computers are easier to travel with as well.

If you haven’t installed Prey on your computer yet, what are you waiting for? It’s free, takes up almost no resources, and could help you get your computer back if it’s ever lost or stolen. I sure wish I had installed it on my other computer, or I might have it back now, as well.

We've been traveling for
4519 days