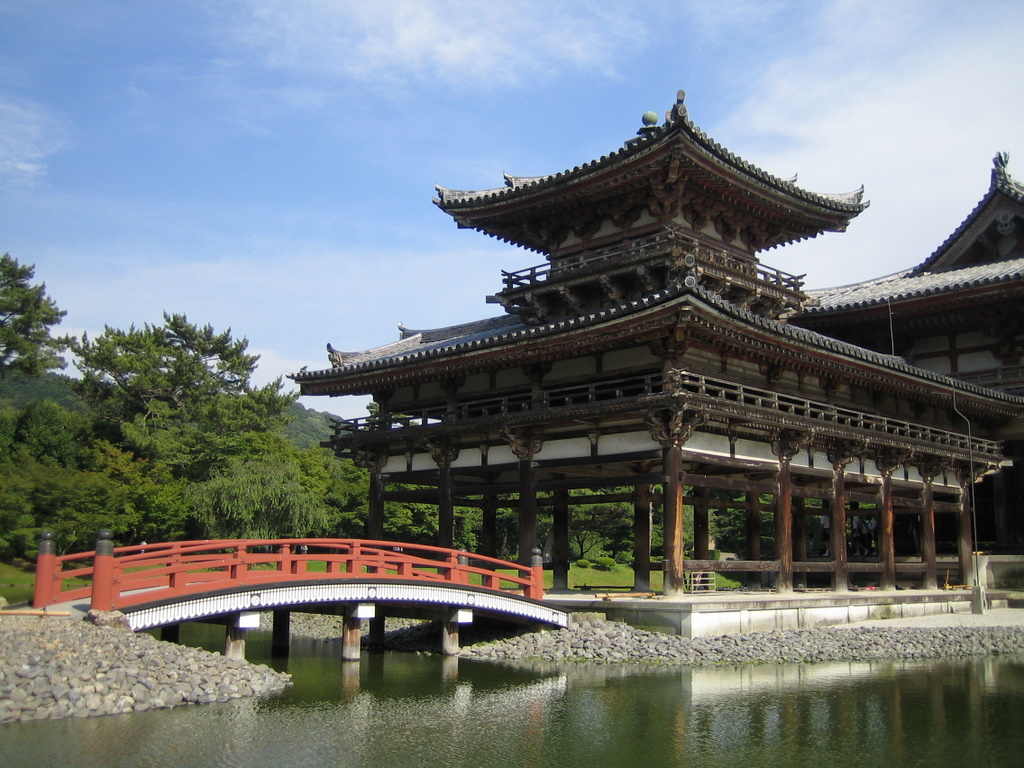 Tadaima! I’m home from Japan, and had a great time. Here is a summary of the entire trip, with pictures. 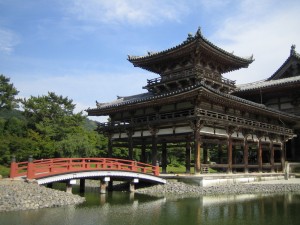 On Friday, I left for Japan with my dad, one other chaperon, and six students from ages 14-18. It was a lot of fun being back in Japan, smelling the familiar smells, and hearing the familiar sounds. In fact, it’s so familiar to me now, that it lacks some of the excitement and newness it once held for me, but I still thoroughly enjoyed it. As is typical for me, I fell in love with the Japanese gardens and trees once again.

It was also nice being with my dad, who taught us a lot about the culture and history as we went from temple to shrine to garden. Much of these sights I’d seen on previous trips to Japan, but there were some places I’d never been such as Byoudouin and Ryouanji, which I really liked.

It was very hot in Kyoto – 90° (F) and extremely humid! Being outside walking all day was not easy. I was glad when I finally purchased a sweat rag, as I used it constantly. Some days were more shady, though, which helped a lot.

The food was excellent. We ate at restaurants every meal, except for a few times when we got our breakfast or lunch from a convenient store and ate it on the train or bus. We had all my favorites: katsudon (pork cutlets & eggs over rice), curry rice (I forgot how good this was), gyouza (pot stickets), omu rice (omelette rice), sushi, and ramen (not “Top ramen” – real ramen). Oh, and I can’t forget all the vending machine drinks: Pocari Sweat, Kirin Lemon, Calpis, etc. We were also treated to shabu-shabu (cooked pork or beef and vegetables) by the city officials of Yuzawa City, where we would have done homestay if it weren’t for the swine flu scare. That was a nice meal as well, and I enjoyed visiting with them.

It looks like there’s no longer a huge technology gap between Japan and the U.S. like there was ten years ago. Japan doesn’t seem to be any further ahead with small electronics, cell phones, or computers – in fact, we might even have a leg up on them! I only saw one person with an iPhone the entire time I was there (and I saw thousands of people with phones). I talked to one guy on the train about it (who works as an engineer designing Canon printers), and he said few people in Japan have iPhones because they’re so expensive. Understandable. The electronics stores were still fun to walk through, though, because they’re so different, colorful, and noisy, compared to stores here. 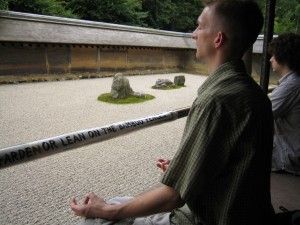 Brandon meditating at the zen garden

I think my favorite part of the trip was the zen rock garden at Ryouanji. This was my first time there, and I didn’t think I would care for it much – it’s just rocks and gravel. But sitting there meditating and staring at the jagged rocks and raked, gray-colored gravel, was really very peaceful. It was a quiet place, except for the occasional sound of wind or birds in the trees just outside the walls (and the whispering or footsteps of the other people there). As my eyes stared at the gravel, I thought I saw bright colors and strange shapes appearing within the gravel, kind of like looking at one of those 3D books where the shapes appear if you can get your eyes to focus correctly, or like one of those optical illusions where your eyes play tricks on you. Kind of fun. Anyway, there was a really relaxing feeling in that place, and I liked it. I feel like I could have spent hours there. As a side note, we saw Richard Gere meditating there as well.

I sure missed my family during this trip, and was very ready to come home and see them again. Also, after eating Japanese food for a week, as much as I love it, I am ready for a pizza or some other Italian or Mexican food for a change of palette. I’m still getting over a bit of jet lag, but was glad we had a non-stop flight from Tokyo to Salt Lake City, rather than transfers and waiting in an airport.

I do love Japan and am grateful I had the chance to go. The students were all really good. It was fun to talk with them and get to know them, and to hear their first impressions of Japan. I’m looking forward to the next trip. Thanks Dad, and everyone who made this amazing trip possible!

Here are the rest of the good pictures. (See my previous post for earlier pictures).

Getting ready for the matsuri

Lots of people came to the festival

Look at the crowd

Crane – saw him catch a fish!

My Solo Trip and Silent Retreat