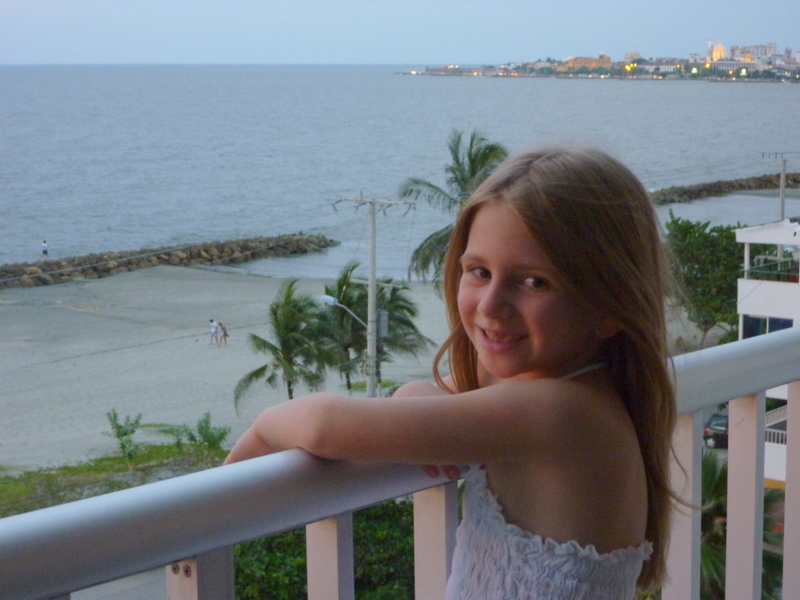 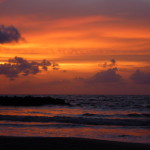 The past few days in Cartagena, Colombia have been a little slower-paced for us than the first few, now that we have the major tourist attractions out of the way. We switched apartments to Edificio Palmetto, which has a pool and an ocean view that has brought us some fabulous sunsets. We’ve also spent more time swimming, since the girls can’t seem to get enough of it. One day, I even got a massage at the spa one day, and Jen got a facial. Ahh vacation… 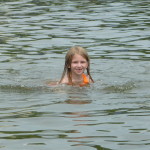 Emily in the ocean

Emily had her 7th birthday over the weekend, and we turned the day over to her to do whatever she wanted. We don’t have a lot of room in our luggage for large toys, which is fine, because what she wanted most was a new dress and swimming suit, which she picked quickly and looks really cute in. We also went to the beach for a few hours, which was quite crowded and hot, but the girls had a blast playing in the water. After the beach, we went back to our apartment and played Go-Fish, built card houses, played stuffed animals, and then had some chocolate cake at a nearby Italian restaurant. I guess the day was a success because afterward she said that she wishes every day could be her birthday. Thanks everyone for all the birthday wishes – she really appreciated them. 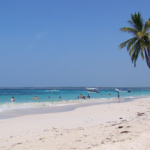 Whenever you ask which beach is the best in Cartagena, people almost always refer to Playa Blanca, which is on the Rosario islands, about an hour and a half boat ride from Cartagena. This is the tour many people try to sell you on the street. The pictures I’ve seen show a lovely Caribbean beach with blue-green waters and white sand – a true tropical paradise like many dream of. However, it also looks like the place is crawling with tourists, may have no facilities, and usually costs $20+/person to get there. So call us boring or lazy or cheap, but we didn’t go. Did we pass up the trip of a lifetime? I don’t think so. We’ve seen lots of pretty beaches in our lives already, and will surely visit others that are even more beautiful and secluded, with more time to spend there and enjoy than just a quick day trip. It probably would have been fun, but we just weren’t in the mood.

So, we haven’t ventured much outside of Boca Grande and old town since we got here. But we did go to a medical clinic in Getsemaní for yellow fever vaccinations. We were told before we boarded the plane to Colombia that we wouldn’t be able to get back into Costa Rica without an international certificate stating that we’d been immunized for yellow fever, since we’re going to three countries that have infected areas (even though we won’t be visiting any of the infected parts of these countries). I tried to find a way out of this, since I hate vaccinations, and think they can sometimes do more harm than good. I often end up getting more sick from the vaccine than I would get from the actual disease, and I didn’t want to spend a week of my trip in bed or throwing up. Plus, the last shot I got must have hit a nerve in my arm because it was sore for two weeks and felt like it took months to fully recover. I do NOT like shots.

Anyway, it turns out we’d need the vaccine to get into Ecuador anyway, since we’d be coming from Peru. And it’s required to get into Brazil regardless of where you’ve been, and we’d like to go there before too long. So we decided to go ahead with it. Fortunately, Colombia offers yellow fever vaccines for free (yeah! Glad we didn’t pay several hundred dollars to get it done in the states last year!) No appointment necessary. We just walked into the clinic and had it done. Although we came late in the day and they only had one vaccine left, so Jen was our guinea pig (thanks for being brave Jen!). We came back early the next day to do the rest of us. It was the “best” shot I’ve ever had, too. Only stung for about 1 second, and absolutely no pain after that. Yay. The girls handled it as well as could be expected.

We also found a new favorite restaurant in Boca Grande, which we’ve been to four times now. It’s called Crepes & Waffles and has the most delectable menu for lunches, dinners, and desserts! Their website also shows a breakfast menu, but it must only be available at other locations. But I’m pleased to learn that they have locations in Peru, Ecuador, Mexico, Spain, Panama, and Brazil, so hopefully we’ll get to eat there again.

Tomorrow we head out for Lima, Peru!

Marie at the beach

Emily in the ocean