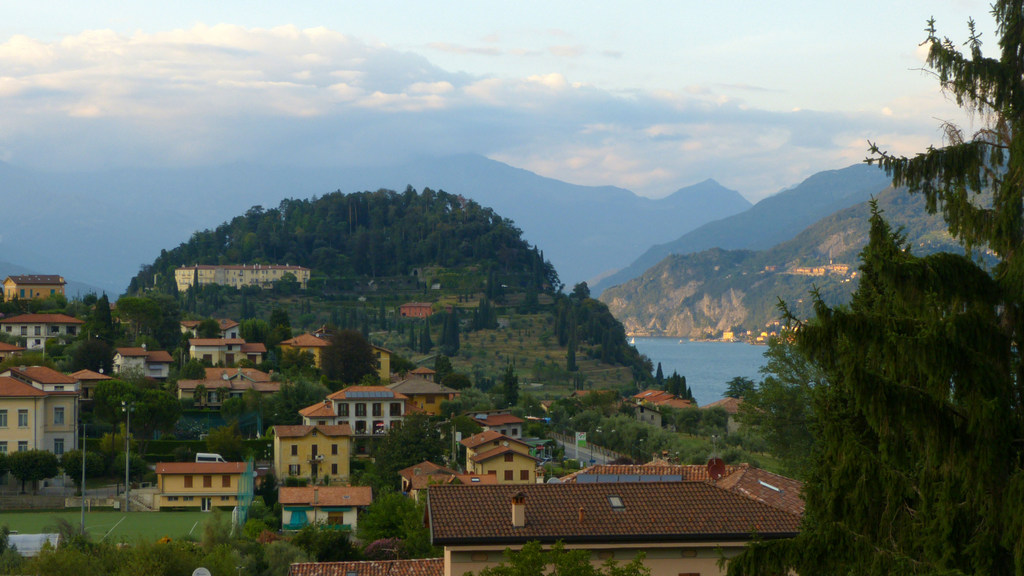 Alright, here’s my last post about Italy, including our time in Lucca, Pisa, Milan, Bellagio / Como, and Venice. This will be more like a travelogue post, so brace yourself for short captions and lots of pictures.

On our way to Lucca, we drove through several Tuscan towns, including Montefioralle, which is a cute little (very little) mountain town with almost no parking.

We passed through some lovely sunflower fields on our drive.

In Lucca, we rode bikes around the town, although it was sometimes tricky through the crowds.

We also spent a night in Pisa. Many people said the only thing of interest in Pisa is the leaning tower, and it’s pointless to spend the night. But we thought it was a nice little town, with a lovely river and some cute buildings. They also have several Indian restaurants! Yum! The leaning tower itself is pretty cool, too, and the buildings surrounding it. Unlike other famous landmarks in Italy, this plaza had grass, which gave it a different feeling.

Here are Emily and Marie straightening the leaning tower of Pisa.

What do you know? It worked!

We also stopped in Vinci, which is the birthplace of Leonardo da Vinci (that’s where his name comes from). There was a small museum there within a castle, although most of it was in Italian.

Then we drove to Milan, through some lovely green mountains. Milan is a larger city with a nice combination of both new and old. We did some shopping there, and visited an outlet mall. The cathedral is also quite spectacular.

Nearby, we found a Magnum ice cream store where you can get all sorts of toppings on your magnum bar. Yum!

From there we went north to Bellagio near Como, a beautiful town on a lake.

We visited an interesting navigation museum where we saw the instruments sailors have used throughout history to chart their courses and know where they’re at. The kids also had fun at a playground in Como. Here’s a street that was near our apartment in Bellagio.

On the other side of the lake was the villa where Star Wars: Episode 2 was filmed. Beautiful place…

Now we come to the last leg of our journey: Venice. It was quite unique to the rest of Italy, with boats instead of cars, and being very walkable. I thought it looked a little worn down, though (probably because of the water), and was surprised at the amount of graffiti, the smell of sewage and cigarette smoke, and the higher prices on food. But we had a great time. Jen and I even went to see an entertaining performance of the Barber of Seville.

We found lots of beautiful masks in Venice. Here’s Emily trying on a mask.

We also enjoyed a lovely gondola ride through the town, passing one of the places Vivaldi may have lived.

More pictures and videos below.