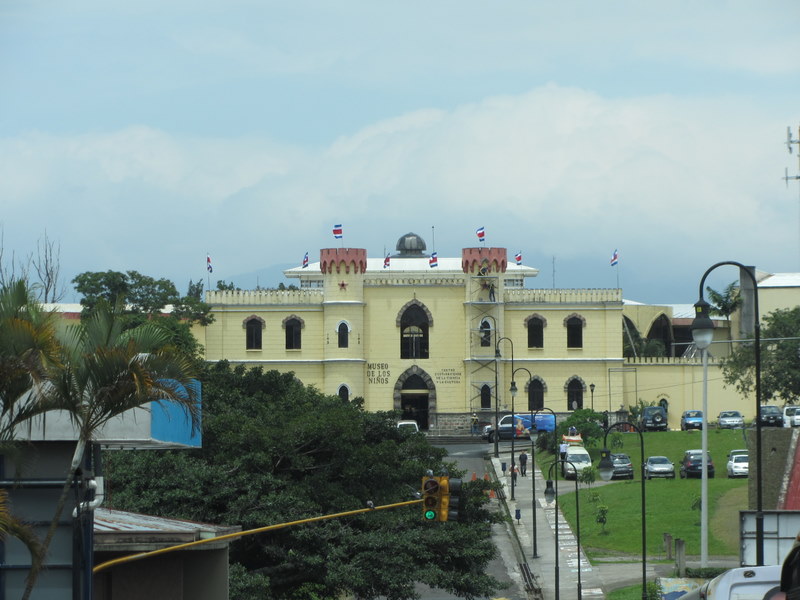 We’ve now been to most of the tourist hot spots in Costa Rica, including many that are less well known. But that hasn’t stopped us from having fun and finding other enjoyable activities to do. During the past few weeks, we’ve had a great time doing more local activities and being with our friends. I didn’t dedicate a blog post to any one of these activities, but I do want to remember them, so I thought I’d put up some photos and videos I’ve taken and combine them into one post. Enjoy!

Inbio Parque is a large walking park focusing on environmental issues and celebrating biodiversity. They have stations for learning about different animals and insects, plant life, climate change, self-sufficient housing, and more. It’s a fun and educational way to spend a morning or afternoon, and we all enjoyed it. They also have a petting zoo, a maze, and a couple restaurants. It’s quite large. Note: Make sure you ask for the “local” rate. Foreigners are charged almost 10 times as much to enter.

Emily has been volunteering weekly at a local animal rescue center, and it continues to be the highlight of her week. She loves feeding the monkey, toucans, parrots, and more, and is a big helper with cleaning, too. You can read her thoughts about this on her blog. The rescue center focuses on snakes, but they also have several different types of monkeys, turtles, a couple crocodiles, and lots of birds. If you’re in the Santa Ana/Escazu area, check it out!

We took a couple day trips with our friends, the Kings, to a lovely beach called Esterillos Oeste that’s about an hour and a half drive from Escazu. We had a great time playing in the waves, sand, tide pools, snacking and talking together, flying kites, and had some great meals afterward in nearby Jacó. While there, we also saw scarlet macaws munching on almonds in the trees right above our heads, and even a whale off in the distance! Here’s a video I made of the trip:

As a family, we’ve been taking a weekly yoga class, which we’ve enjoyed. Our yoga teacher also teaches horseback riding lessons on her beautiful property. We’ve had two lessons so far, and it’s been fun to learn how to ride a horse.

One of the girls’ friends, Addie, had a Costa Rican Cooking birthday party where the kids learned how to make pizza, cupcakes, cookies, and tortillas. The kids had a lot of fun making the food, and enjoyed eating it as well, and playing games while the food was cooking. Everyone had a good time.

One day, after a great sushi lunch with our friends, the Kings, we went with them to Cartago, about 45 minutes east of San José. There, we saw ruins of an abandoned church in the center of town. The gardens inside were lovely, although we couldn’t enter, but we enjoyed dozens of squawking parrots in the trees.

We also visited a beautiful old church unlike any other I’ve seen in Costa Rica, the Basílica de Nuestra Señora de Los Ángeles, built in 1639, but later restored after an earthquake. It was very elaborate, and the people inside were crawling on their knees up to the altar. Each year, two million Costa Ricans choose to make a 22 kilmeter pilgrimage to this church, many of them doing so on their hands and knees.

After that, we toured the only craft brew in Central America and learned how beer is made, then had a fun dinner together at a nearby restaurant, where I sang karaoke, and the kids danced.

Kids snacking on barley at brewery

Wow. The Museo de los Niños here is not only HUGE, but also well done, and I regret not going sooner. We had so much fun and learned a lot, too. The building used to be a women’s prison, and each jail cell has now been converted into a room focused on a different theme, from how the human body works, to outer space, to how airplanes fly (including the ability to go inside a real cockpit), to ancient Egypt and the science of light, and so many more! Most of the exhibits are interactive and it’s a lot of fun for kids and adults. And don’t forget to visit the slanted house (casa inclinada).

One morning we went bowling with some friends. We’ve actually been bowling twice in Costa Rica. There is a small bowling alley in San José, but a new one, Bol Cariari, just opened up near Cariari Mall in Heredia that is much larger and also has some beautiful views from the windows. We had a lot of fun playing, and Amie gave the kids a nice lesson on the physics of friction and momentum.

Okay, so this isn’t necessarily a Costa Rican activity, but we love playing with our baby, and we spend a lot of time doing it. She smiles often now, laughs occasionally, and is getting closer to being able to crawl. She makes really sweet noises and Emily and Marie enjoy playing with her, and trying to get her to smile and interact with them.

Also check out this cute video of Aysia smiling and laughing.