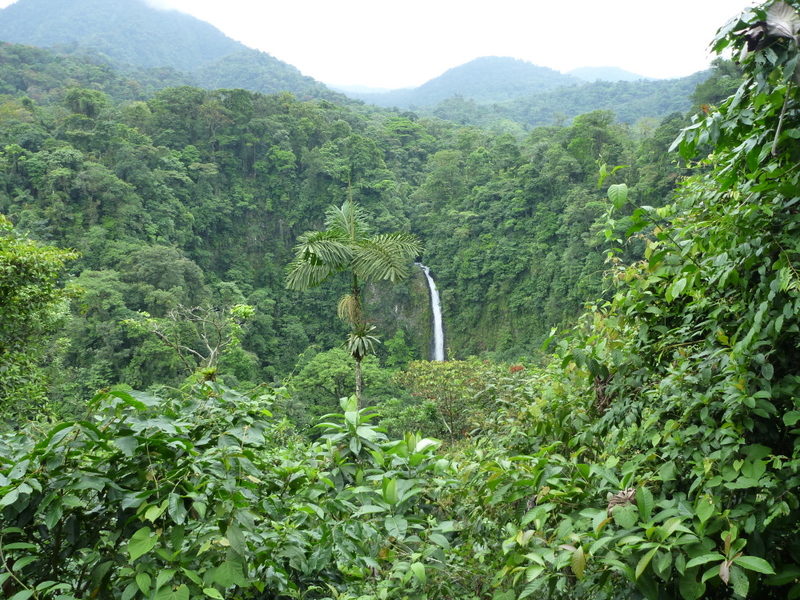 Rather than head home after the rescue center, we decided to continue on to La Fortuna and spend a day and a night at Los Lagos, which is a hotel/resort at the base of the Arenal Volcano, with hot springs and swimming pools, butterfly and frog houses, and beautiful grounds. 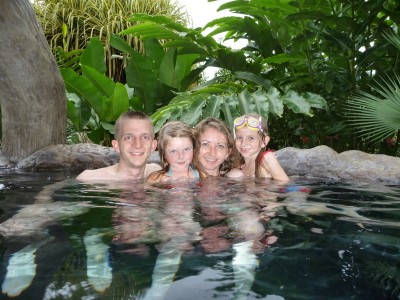 We hoped to be able to see the lava flowing down the Arenal Volcano at night, but it was too cloudy that day. Still, we really enjoyed the warm pools, waterslides, and the pina coladas we drank from pineapple shells while sitting in the water. Yes, the picture-perfect vacation paradise. And for only $105/night, including the hot springs and animal houses.

The next day we saw the butterflies, frogs, crocodiles, and more, and then started driving home. It was still pretty early in the day so we planned to stop along the way if something looked interesting. And being Costa Rica, of course, we weren’t disappointed. 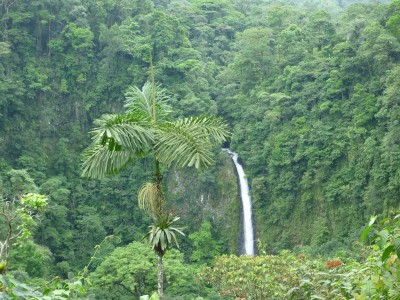 Just minutes after we started out, we saw signs to a waterfall. Little did I know that this was the famous La Fortuna waterfall that you always see in pictures of Costa Rica. What a beautiful place! It was a short 15 minute hike down to the falls. (The girls complained all the way down as if the walk were torture. But they happily hiked all the way back up – even had a race near the end. Kids…)

After looking at the waterfall for a few minutes, the girls decided they wanted to take a swim in the river. The water was a little chilly, but that didn’t stop them. Marie swam around with the fish and Emily and Jen waded out into the water a little.

On the drive back home, we realized we forgot to fill up the gas tank, and were near empty, in the middle of the jungle, with another 45 minutes or so until civilization. We also had to stop and wait for about 30 minutes for some construction work. Fortunately, we made it to San Ramon without running out of gas, and got home to Grecia safely just after dark. Fun trip!

They found a cave

The kids on a walk

Nice teeth you have

Marie getting in the river

La Fortuna from down stream

Behind where we stopped for lunch

Bridge to an art shop