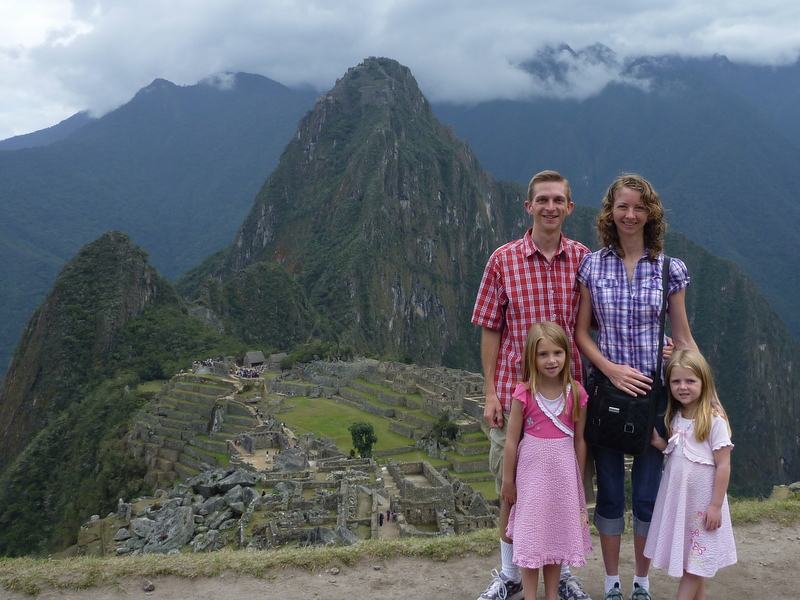 To say that our visit to Machu Picchu was amazing would be an understatement. There just don’t seem to be words to describe places like this. Having visited many ruins in Peru over the past couple weeks, I was expecting more of the same. However, on the bus ride up, with the backdrop of the morning sunlight streaking through the steep Andean peaks, I sensed that I was approaching something magical. 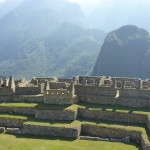 The night before, we stayed in Hostal Imperio de Los Incas, a hostel we found once we arrived in Aguas Calientes for just $30/night. Aguas Calientes is the closest town to Machu Picchu, and is itself surrounded by towering mountain peaks. The hostel was great except that Jen and I had to share a twin bed, and some obnoxious loud speakers were blasting the same two annoying songs over and over again until 10pm. The noise was especially unwelcome since we were planning on waking up at 4:30am the next morning to watch the sunrise over Machu Picchu. We ended up awaking just before 5 and missing the first bus, as well as the sunrise, but we got on around 6am, when the sun was still low.

On the 20 minute bus ride up to Machu Picchu, our bus driver played the famous Beatles hits “Can’t Buy Me Love” and “Help!”, a welcome contrast from the annoying songs of the previous night. Although, except for it being a long and winding road, I think the Peruvian flute music we hear everywhere else in Peru would have been more appropriate. We got front row seats on the bus, which also gave us better views of the sharp, jagged cliffs all around. 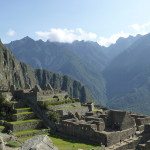 Before entering the park, we found an English-speaking tour guide who I easily talked down from 150 soles to 100 soles (about $35). It would have been cheaper if we went with a group, but everyone else on the bus had already gone ahead. Our tour guide, Felix, grew up in the jungles of Peru, eating cayman, rabbits, parrots, and whatever else he could find. He speaks fluent Spanish, English and Quechua, one of the ancient languages of the Incans which many native Pervuians still speak. Machu Picchu means Old Peak in Quechua.

Once we walked through the gates and I saw the ruins surrounded by the striking mountain peaks, I wanted to stop and cry. I was overwhelmed with the beauty of it all. Unfortunately, our guide had a tour to give. He was actually a very good guide. He talked softly with interesting tones, and paused enough for you to take it all in. But I kept finding myself wanting to be alone in silence, or to explore areas he wasn’t taking us to. These feelings increased as I realized that most of what he was telling us was speculation anyway, much of which I could observe on my own. The girls were getting pretty bored of the guide, too. My biggest disappointment was that Felix didn’t take us up to the top guard tower for the “postcard” view first, while we still had the great morning light. He chose to take us on the “lower” tour (skipping the great view altogether), and by the time the tour ended (2 hours later) and we were free to explore and go up to areas like that, it was cloudy, and the girls were tired from walking. 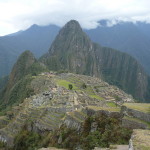 Still, we went up and it was of course, incredible! The ruins were impressive, much of the stone work still completely in tact. Some roofs had been reconstructed with the mudded thatchwork so you can see what the houses would have looked like when it was in use. There are lots of small crevices and caves to explore, as well as many houses, kitchens, bathrooms (holes in the ground that drain outside) and windows and shelves for decorative pots long gone to be observed at museums. We also saw sacrificial altars and supposed astronomical sites that cause the sunlight from the mountains to shine on particular spots at certain times of the year. They had created a system of running water channels from a natural spring. The Incans even knew where the fault line was and built around it. Smart guys.

But as impressive as the ruins were, the most impressive part for me is the location. The entire complex is surrounded by jagged green mountain peaks that jet up all over the place, as far as the eye can see. The ruins themselves are built on a steep cliff with many precarious spots that could easily send one tumbling to an untimely death. But it sure makes for incredible views. On one side, in the valley below, you can view the Urabamba river, one of the main channels that feeds the Amazon. Many walking paths lead to surrounding ruins, including some of the multi-day hikes tourists often take to get here.

Signs at entrance say “No food allowed” but many hotels offer box lunches for Machu Picchu trips and everyone seems to be snacking on something, so they must not take the rule very seriously. We were glad to have brought along some fruit and snacks for the girls. 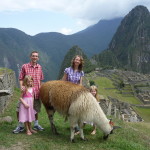 There were a lot of other tourists at Machu Picchu that day, but it wasn’t overly crowded. At one point, we met a very nice Japanese couple who I offered to exchange picture taking services in front of a Llama, via gestures. For, while I could understand them perfectly in all they said to each other, I was so embarrassed that I couldn’t even construct one proper sentence in Japanese! It all just kept coming out in Spanish. I couldn’t even remember words like “to speak” or basic sentence structure. It was pathetic! I think I need to move to Japan for a while and get my language abilities back. I would love to be able to switch between the two languages without a problem.

After we were finished at Machu Picchu, we had a nice lunch in one of the many pizza restaurants in Aguas Calientes (it seems every place in Peru serves wood oven pizza and Italian food). We then took the train back to Ollantaytambo where we stayed in another nice hostel, and I had a delicious Alpaca steak for only $7 – a fitting meal for one of our most memorable days in Peru.

So much to explore

Marie in a cave

Emily reading on the train