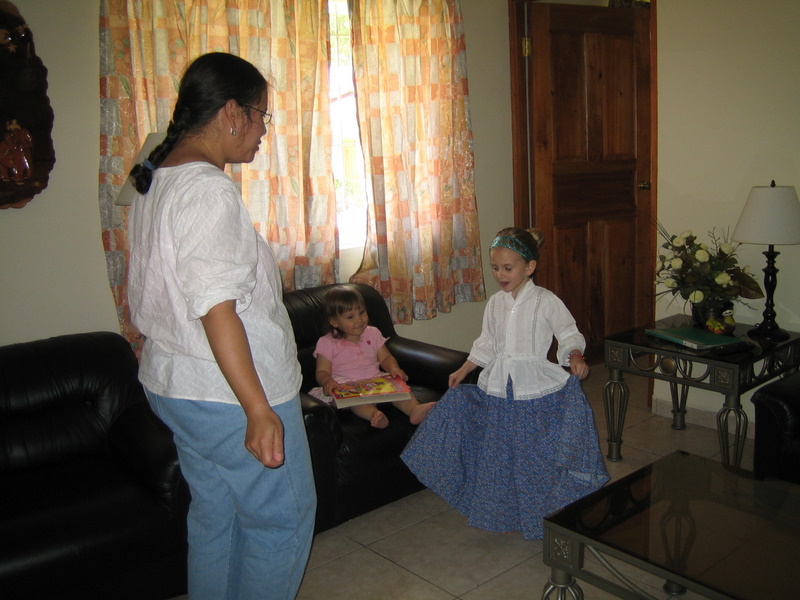 Today we met and had lunch with a nice family we met on some Panama forums before we left. Bernie helps people protect assets and minimize taxes through foreign trusts and foundations, and we had some long talks about that. Marisol and Jen talked a bit about health and home schooling, both of which we’re interested in. They also have a 2 year daughter named Yahli and the kids had a lot of fun playing together. Marisol also taught Emily how to do a little Panamanian dance which she picked right up on. It was really fun to be able to visit and talk to people other than ourselves :), and we’re glad we have some more dates setup this week with others who live here. The people are so friendly!

Emily on the monkey bars

We ate lunch at Hotel Dos Rios, which has a little playground where the kids enjoyed swinging and running around. They also have a butterfly house, but it was recently destroyed when a tree fell on it during a strong windstorm. This was a nice restaurant, though, and we enjoyed the food a lot.

At the playground, Emily had a great achievement as well. She made it all across the monkey bars by herself for the very first time! We were all really excited for her, and she was also excited for herself. :)

After our visit with Bernie’s family, we rested for a while back home, and the kids watched some more cartoons in Spanish. Then we went to dinner at the Loco Pollo (crazy chicken) Mexican restaurant. I had a delicious burrito and Jen had some enchiladas. It was good to get some Mexican food. I haven’t had much of it here, and I like it quite a bit.

Emily on the monkey bars

Emily doing a Panamanian dance in our living room