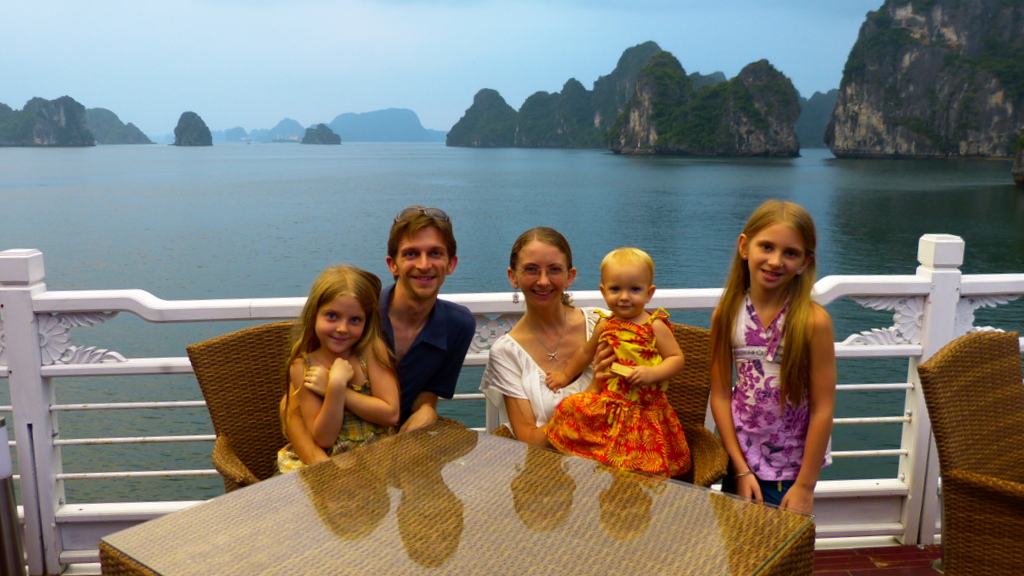 Nineteen days, eight towns/locations, and numerous activities in Vietnam has given me much to write about. I have about 170 decent pictures, several minutes of video, and dozens of stories and memories. We heard that Vietnam was overwhelming and chaotic, and much of it was. But it was also unique, exciting, picturesque, indulgent, and delicious!

The Vietnamese were much more physical with our children than we’re used to, often reaching out to feel their hair or pinch their white skin. Our kids have become quick to pull away and give dirty looks should anyone invade their personal space. We also got hassled a lot to buy things we didn’t want, our gentle “no thank you’s” being ignored. I don’t like being rude, but there is only so much touching and insistent selling I want to tolerate. We also got shortchanged and charged extra by a number of taxi drivers and other service providers (sometimes 10 times the regular price). Sometimes I fought it, and sometimes I just paid it as it was still cheap and they probably needed the money more than I did.

Fortunately, we also met some genuinely friendly and hospitable people. For example, a family waiting at the train station let Marie try their yo-yo, and then gave it to her (they wouldn’t accept it when I tried to give it back). A woman at the Cu Chi war tunnels in Saigon waited at the exit for I don’t know how long in order to give Emily medicine for her tummy. And at the Da Lat airport terminal, Marie threw her rubber snake around and it got stuck in a grate on the ceiling. A nice Korean man proceeded to throw his shoe at it for several minutes until it fell down, resulting in a chorus of applause from the other waiting passengers. The service we received at most restaurants, hotels, and on tours was also usually top notch and more attentive and helpful than anywhere I’ve ever been.

We didn’t plan any of this trip in advance except for the first two nights we booked at a hotel in Ho Chi Minh City (formerly Saigon). We just had a short list of places we might want to visit (Saigon, Mui Ne, Da Lat, Hoi An, Phong Nha Caves, Hanoi, Halong Bay, Sapa) and activities we might want to do in Vietnam, but we chose our hotels after we got to each area and could see them in person, and we based our activities on how we felt that day. It worked out well for us this way, and allowed us to go at a comfortable pace, which ended up being faster than normal for us.

I could write a series of blog posts about our time in Vietnam, the different towns we’ve visited, and everything we did in each city. But I think I’m going to keep it short by only mentioning the most memorable moments. Some of them happened on tours or in tourist attractions, and others were off the beaten path and completely unexpected. Each one will play a part in how I remember Vietnam. After that, I’ll blast you with all my pictures and videos so you can get a audio-visual feel for all we did.

So here are some of the memories that stand out from our trip to Vietnam.

And I’ll let the following videos and pictures tell the rest.

On the sleeper train

Tour guide with Aysia in Sapa

A street in Sapa

Aysia on the ship

She sells sea shells by the cruise ship

Pearl in an oyster

On a boat ride

Girl rowing a boat by herself

Swimming in the bay

Brandon and Aysia on Cat Bay

Brandon and Jen and Halong Bay

Jen and Aysia on the ship

Jen always has her oils

Going in a cave

Our ship, the Au Co

Kids room on the cruise ship

Entrance to a cave

Family in a cave

Interesting foods in Hoi An

Daddy and Baby in Hoi An

Hoi An at night

Jen on a bike

Beach at Hoi An

Boats on a river

Biking around Hoi An

Family by rice and lotus fields

Marie at a temple

Jen at the tailors

Monks in the lake

Artichokes and more. What a presentation!

At Crazy House in Da Lat

Baskets and bananas on bikes

Our Driver to Da Lat

Beautiful valley on the way from Mui Ne to Dalat

Driving from Mui Ne to Dalat

Sand in the eyes

Emily at Sand Dunes with sled

Fun in the pool

Baby and Mommy at the beach

Windy day at the beach

Aysia at the beach

Meditating in the park