In this week’s video, Emily, Marie, and Aysia share some of their memories from Spanish speaking countries. My niece recently asked us to create a video for her Spanish class in school and we thought it would be a great opportunity to share with our readers, as well.

Some of the memories include Dia de los Muertos in Mexico, Machu Pichu in Peru, ziplining in Costa Rica, the animals of the Galapagos Islands, and the architecture of Sagrada Família in Spain.

Listen to the audio:

Hi, I’m Brandon. We have been traveling as a family for the past seven years to over 32 different countries. Several of those have been Spanish speaking countries. We started out in Panama and Costa Rica, and we’ve traveled to Guatemala, Colombia, Ecuador, Perú, Nicaragua, and Honduras, and Mexico. I think I’ve hit them all on that side of the world. We’ve been to Spain, as well. I hope you enjoy some of our girls’ impressions of these countries and that you enjoy the video.

Emily:
In Mexico, we celebrated a holiday called the Day of the Dead. In Spanish, it’s Dia de los Muertos, and it’s basically where they celebrate their ancestors. There’s big parades on the day and they paint their faces to look like skulls. They make these candies that are called sugar skulls and they put them next to graves to give to their dead relatives and friends. 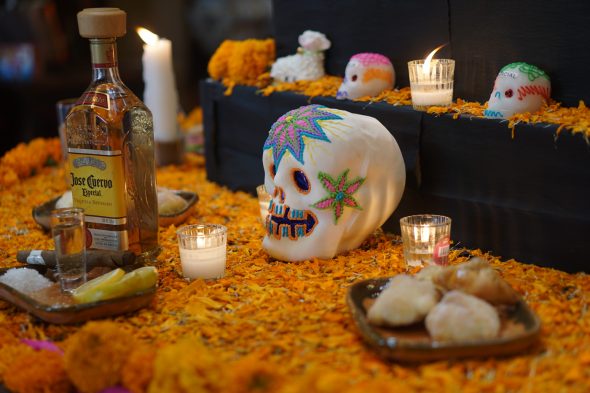 Marie:
Hola amigos! Hi, I’m Marie. I’ll be talking about my experiences in many Spanish speaking countries. First, I will talk about Mexico. Mexico is a great country. They have skulls all over the country of Mexico, and they put even more up when it’s Day of the Dead. Day of the Dead is a Mexican holiday to remember their dead family members. They do parades, dances, and they decorate the graveyards. 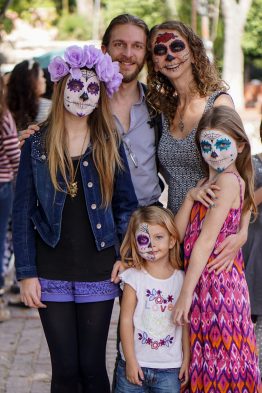 Aysia:
I remember the Day of the Dead. I got my face painted and I got these skulls that I could decorate with frosting. I really liked it and it was really fun.

Emily:
I liked a lot of the architecture there, like the buildings that were very colorful. They were mostly red and orange, and a bit of yellow, too. It was nice. 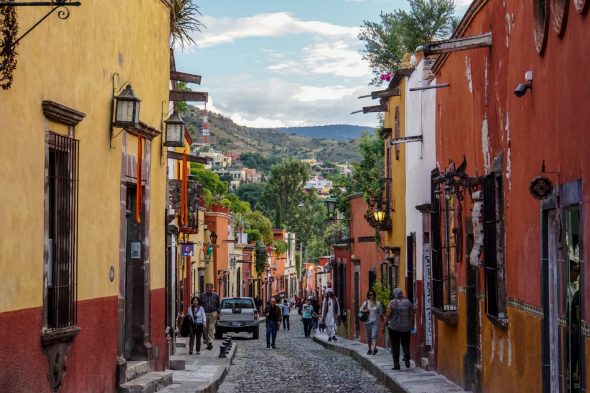 In Mexico, we had this food called mole, which was a sauce that basically they just mixed a bunch of foods together to make it. Sometimes it has chocolate in it or tomatoes. I forgot what else they had in it, but it’s basically just a bunch of food they mixed together in one big sauce. I didn’t like it very much, but everybody else liked it. I really liked the tacos there; they were really good. I liked the tortillas. Mmmmm…I just love them!

Emily:
In Peru, we went to these ancient ruins called Machu Picchu, and they were so beautiful. There were mountains surrounding them that were so green and beautiful. When we were walking around and exploring the buildings, it was nice and fun to imagine what was there and how people lived. 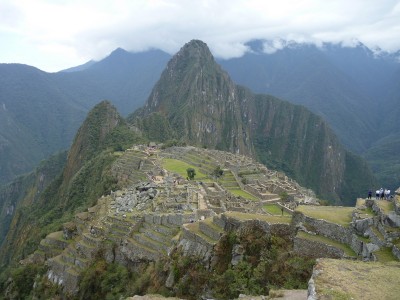 Maire:
There were giant grass steps in Machu Picchu.

Emily:
Also, in Peru, there were lamas just walking around the city. It was really funny and cute. They were so adorable. There were alpacas too. 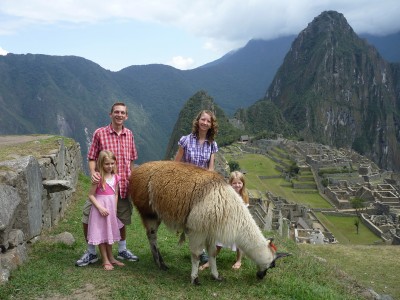 In Peru, they weren’t really used to seeing blonde hair, so we stuck out a lot, me and my sister. I was also, like, seven, so they thought I was kind of cute I guess and that might have also been part of it. It was kind of annoying because they kept taking our pictures a bunch.

Marie:
Costa Rica is a country with nice and friendly people. And lots of coconuts. We met a lot of our friends there, and there are many cool things to see. And there are so many animals: scarlet macaws, monkeys, and toucans. Just so many animals.

In Costa Rica, there’s a volcano that is really, really, really full. It has this field of ash, basically. And sometimes when you walk on it the ash comes up and goes into your eyes. 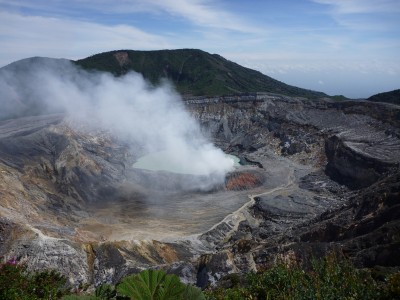 Emily:
In Costa Rica, we had this delicious sauce called salsa lizano, and it was basically a vegetable sauce we put on gallo pinto. It was really good. If you go to Costa Rica, it’s a really good thing to try.

Aysia:
I was born in Costa Rica!

Marie:
The Galapagos Islands were really cool because there were a lot of animals you would not see anywhere else. Like blue-footed boobies, and blue crabs, and spiders that live in caves and are blind, and lizard things, and geckos. There were different types of geckos that you wouldn’t see anywhere else.

The tortoises are really cool because they have huge shells and really thick legs, and they look really old and wrinkly. 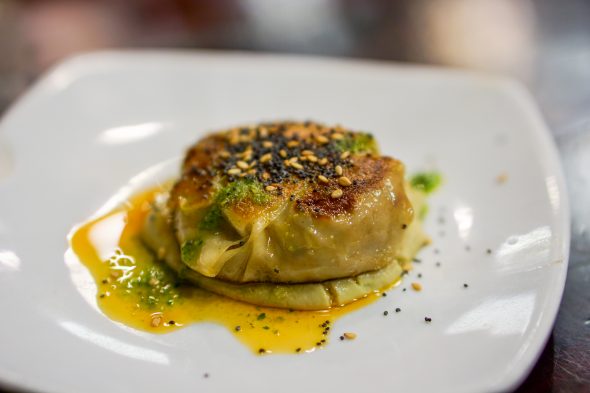 My favorite kind of tapas are croquetas, which are a breaded, fried food usually with mashed potatoes inside and sometimes meat. My personal favorite is the mashed potatoes.

In Barcelona, we went to a place called Sagrada Familia, which is a church that was designed by Antoni Gaudi, and the design was inspired by nature. The stained glass windows were so beautiful and so colorful, and they let beautiful light in. It was amazing; it was magical. The columns looked like trees, and there were stars… the lights looked like stars in the ceiling. It was amazing. 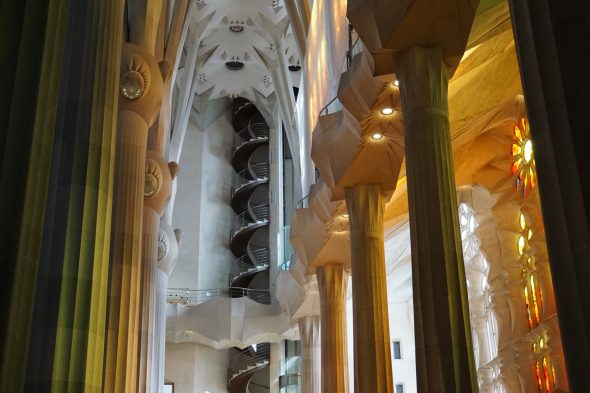 Emily:
And in Sitges, Spain we went to a flower carpet festival. Basically they have everyone make a bunch of pictures out of colored flowers. It was really nice and beautiful, and fun to see what they created. The festival was called the Corpus Christi, which means the body of Christ. 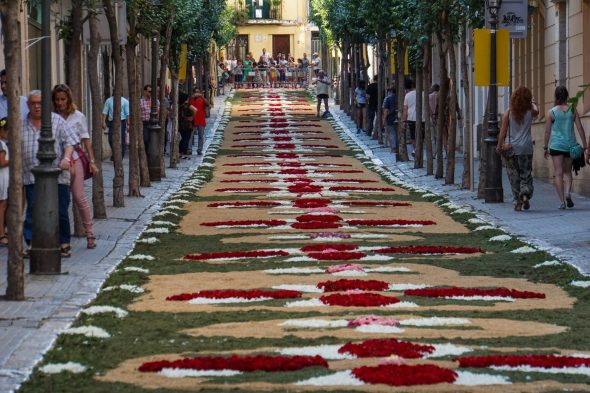 Aysia:
I remember when I saw the flower carpets. And when I was in the pink house with my family and some friends and I remember going to a few beaches.

Marie:
There was flowers everywhere, like flower petals and flowers. Basically they made pictures with them and then put them on the floor and made ice cream and stuff. It was really cool.

Emily:
Also for the festival, they had a bunch of giant statues that people were in, and they just paraded them around the town. It was really funny because they were just dancing. We had this one follow us around… actually, we followed the statue because we thought it was cool. And then it scared my youngest sister.

My favorite part of traveling to Spanish speaking countries was being able to speak Spanish to people because I just love speaking Spanish. It’s my second language, and I love it.

If you liked that video, subscribe to my YouTube channel or to our newsletter at the bottom of the page.