We’ve been doing a lot of thinking the past few weeks. We’ve been trying to decide where we’d like to have our baby, and where we’d like to live for the majority of next year. After looking at several different countries, we realized that there weren’t a lot of options for dual citizenship in countries we would want to live long-term right now.

Yes, Canada and Spain are lovely, but they’re also more expensive, and not our favorite climate. Ecuador is much more affordable, and parts of it are very beautiful, but it has security issues, and we don’t like drinking bottled water all the time. If we ever do want to get residency in Ecuador, though, all we have to do is put $25,000 in a CD (earning 7-9% interest, by the way), and we’re instant permanent residents! And after that, we could become citizens if we want to stay for 2-3 more years. Maybe sometime down the road…

Having a Baby in Costa Rica 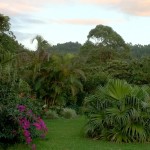 After looking at all our options, we decided to stay in Costa Rica, and have our baby here! As an additional bonus, once the baby is born and is a Costa Rican citizen (as well as a U.S. citizen), we will then be related to a Costa Rican, allowing us to apply for permanent residency as well, so we will no longer have to leave the country every 90 days if we choose to stay here. We could have applied for residency anyway, as long as we can prove a certain income level, and live in the country 6 months every year. But now we won’t need to worry about either of those requirements, and will only need to visit Costa Rica once a year for 72 hours to keep our residency status. This will give us more of the freedom to travel that we’re looking for, as well as the freedom to stay if we choose.

So the next question is, where in Costa Rica will we have the baby? Based on our last two deliveries, which were extremely fast, it makes the most sense to have the baby in our house, so we don’t risk having it in the car on the way to the hospital. Plus, after watching the documentary, The Business of Being Born, we realized that a natural home birth with a midwife is what we want anyway. But we do want to be close to a hospital just in case, even though we don’t plan on using it. Unfortunately, the best private hospitals are in San José (Costa Rica’s largest city), so we will probably be spending at least the month of June in either Escazú, Santa Ana, or Ciudad Colon, all of which are nicer areas of San José, less than 20 minutes from the hospital. Unfortunately, they’re also very expensive areas. 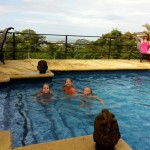 Making friends in the pool

Recently, we’ve also thought it would be nice to live closer to the beach, even if just from March-May. We took a short trip down to the Uvita/Ojochal area of Costa Rica (4 hour drive), on the southern pacific side, thinking it would be a good place to settle for a while, maybe in a house with a nice ocean and jungle view, and a swimming pool. And while it was a beautiful area, it’s just too remote, and wasn’t as built up as we had imagined. Sure, there is a grocery store or two, and several restaurants, but the roads around the town are all dirt roads, and full of rocks and holes, which we know we would get tired of, especially during late pregnancy. And the towns just lacked a nice community feel, being a little bit too spread out without much of a town center.

As we traveled back home, we realized how much we have always liked the town of Jacó and the surrounding area, ever since we visited Jacó for our first time last August. We talked with a few people who are going to keep us posted on some good rentals as they come available. There are some nice little communities near Jacó, whether we’re looking for a little condo with a community pool and a bilingual private school within walking distance, or a private villa overlooking the ocean, there are plenty of options in Jacó. It’s also just an hour away from San José, and is central to most everything in Costa Rica, so would probably be a good place to call home. But we’ll have to see where we end up, since we tend to change our minds quite frequently these days.

We also visited a doctor in San Ramon this week, got an ultrasound, and found that the official due date of our baby is June 17, 2011. We’re excited for this change, and probably have no idea how much this will affect our lives. The kids are also excited to have a new baby brother or sister.

Making friends in the pool

What kind of animal?

Feeding animal on side of road

Flower in our garden