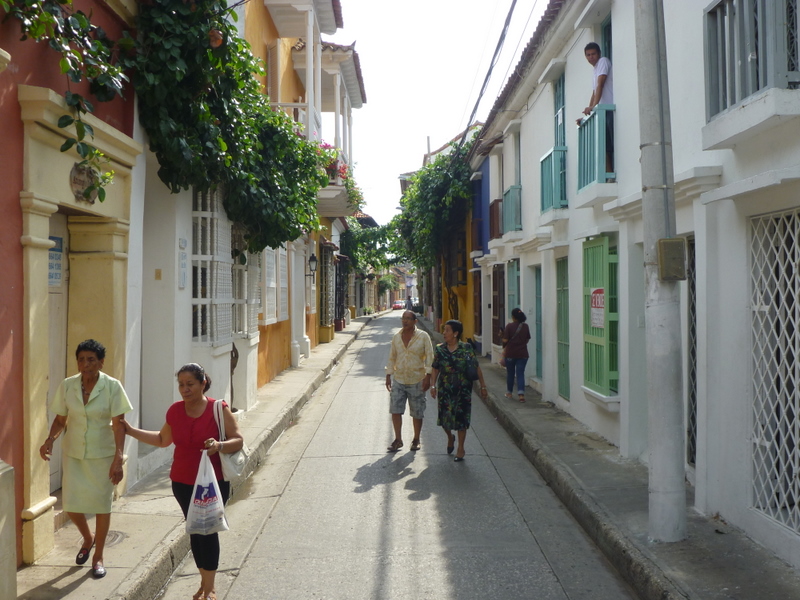 Our two-month trip to South America has begun! We’ve been in Cartagena, Colombia now for about 3 days and are having a great time. Our first views of the city were at night, with the high rise apartment buildings, lights on the cathedrals and old walls of the city, and the reflection from the lights in the water. A beautiful sight! 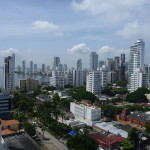 It’s pretty in the daytime as well, although we are not staying in the old town, but in Boca Grande, which is the modern part of the city with the high-rise apartments and busy streets. The apartment we chose (Los Delfines) is okay, but we’ve found it to be very overpriced compared to other hotels we’ve seen here, and there’s a lot of noise at night from the roads, even though we’re 16 stories up. We’ll be moving to another place Monday, which we’ve already booked. If we were to do this again, we’d probably stay right in Old town – a much better atmosphere. There are some great hotels here that don’t really advertise on-line, but that you just have to come and see.

The main thing we haven’t liked about Cartagena is being constantly bombarded with people trying to sell us things as we walk along the street. “Hey Amigo!”, they say, as they hold out their rack of sunglasses, wooden pots, paintings, cigarettes, hats, or boat tour fliers. We find ourselves repeating “No, gracias!” about every 5 steps or so, and it gets really annoying, especially if they’re persistent, which is most of the time, so I often have to repeat myself or ignore them.

I’ve considered donning a sign that reads something like, “I don’t need any more stuff. My luggage consists of only one small backpack, and it’s already full. Please leave me alone.” But I think it would just be ignored anyway. I think when you have white skin, you just can’t help but look like a souvenir-hungry tourist in South America. Oh well.

As for the backpack, yes, we decided to pack very light for this trip. We each have one small backpack, and that’s it. No suitcases this time. We’ve really enjoyed traveling light so far. It sure makes airport checks and stairs very easy.

Here are some of the highlights of Cartagena so far.

Tomorrow is Emily’s birthday and we’re leaving the itinerary up to her, but we think that part of it is going to include the beach, which she’s been asking us about ever since we got here. Happy 7th birthday, Emily!!

Watch the video below. Click the pictures to see a larger image.

Monkey at the park

Emily on a pirate ship

On the walls of Cartagena

Marie looking into a canon

Tunnels in the fort

Tunnels in the fort

First Timers in France, Part One