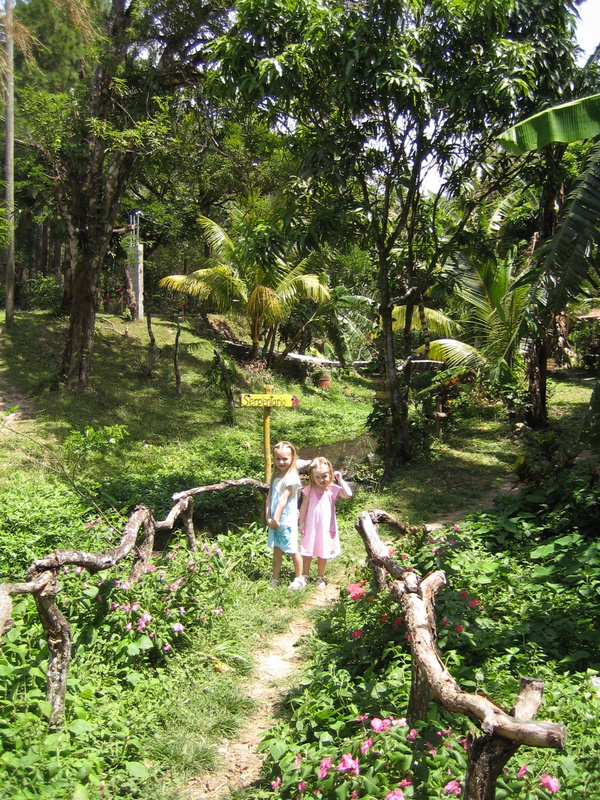 On Monday, we got a late start in the morning, which has been typical for us, lately. When went to the Serpentarium, which we’d heard was a lot of fun, and they let you hold a a boa constrictor, we realized they were closed. We’re not sure for how long, so we might try to go back. It was during the noon hour, so it could have just been closed for lunch, but there were no signs or hours posted.

Then we went to an orchid garden, run by a very nice Japanese man and his father. I actually got to speak a bit of Japanese to them, which was fun – but difficult, after having been focusing so much on Spanish lately. They had some beautiful flowers there, but not very many of the plants had blossoms this time of year.

Then we visited the Painted rock of El Valle. There are petroglyphs on a giant rock, and no one really knows what they mean or how old they are, but they’re pretty neat looking. once we got there, we heard there was a trail to a waterfall. So we went to see the waterfall – again forgetting our swimsuits because we didn’t know it was there, so we didn’t swim. :) But we let the girls wade in the water a bit.

We spent some time at the library after that, to use the Internet. Then got some cupcakes and donuts at the bakery.

For dinner that night, we went to the Rincon Valley restaurant, which was delicious, and had a romantic atmosphere, along with a pretty garden and animals such as bunnies, geese, and fish. Emily’s hamburger had a particularly great flavor. Jen and I both had fish dishes, and Marie had a mini-pizza.

Frog at our house

On our return home, it was dark, but in our headlights, we saw an armadillo crossing the road! We’d never seen one of those before. And then as we were entering our house, Marie pointed at the door and said there was a frog! We looked, and sure enough, a frog was waiting there for us right on our porch! So we turned on the lights to get a better look at him, and I even got to snap a photo. This was much easier to see than the last frog we hunted out!

Emily and Marie at the painted rock

Emily and Marie wading in the water

Frog at our house