We just got back from an 8-day trip to Guatemala as a final visa run before we have some visitors over the next few months. This was our first time in Guatemala, but I hope it won’t be our last. We really enjoyed our time there.

When researching the trip, one caution I continued to hear was the extremely high crime rate, including murders, muggings, car hijacking, and all sorts of things. So I was a little concerned about our safety, even more so after arriving in Guatemala city around 10pm, and driving around trying to find our hotel through some shady parts of town – it was quite an adventure. We learned the next morning the reason that we saw no cars parked outside and hardly anyone on the streets – all the cars were locked away to prevent theft, and no one wanted to risk getting mugged!

I guess Guatemala city isn’t a place you want to be outside at night time. However, the rest of the country seemed as safe as any other central or South American country we’ve been to, despite the heavy car security precautions. 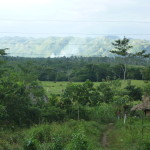 We chose to rent a car rather than fly from Guatamela City to Flores simply because the quick cross country flight ran a steep $250/person ($1000 for all four of us). We also thought it would be nice to see more of the country side. If we were to do it again, though, I would definitely fly. While the drive was very beautiful – especially once you’re more than a couple hours out of Guatemala City – there wasn’t a whole lot to see or do along the way besides the views. Hotels were sparse, and it was a really long drive – about 8 hours each way, which we split up by staying at whatever decent hotel we could find along the way. Plus, the car we got was pretty junky. The A/C didn’t really work, and the tires were in pretty bad shape.

Fortunately, we came across a nice place on our way to Flores, in the small town of San Luis. It had several swimming pools (although quite dirty), a restaurant, Internet access (via usb), and we even got serenaded by a live marimba band until about 10pm. Unfortunately, I don’t remember the name of the hotel, but I think it had the word “Sol” in it. Anyway, there are only about 3 hotels in the town, and it did look better than the other two. Plus, it was only about $15/night! 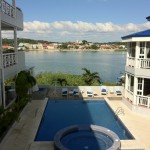 The next day we made it to our destination of Santa Elena, which is right next to the island of Flores. We stayed at Casona del Lago hotel ($70-100/night), which was very nice and had great views of the island. At the pool, we met a really sweet girl named Gabriela who works for Taca airlines and gets lots of discounts on hotels. She went out of her way (like an hour out of her way!) to help us book a fabulous place in Guatemala city for our last night at about half price. We wished we could have spent more time getting to know her.

Flores is a really cute town with pastel painted buildings and narrow streets to stroll through. I was impressed by how clean the island was. There are a number of good restaurants on the island, and a central park decorated with a large Christmas tree (as are most central American towns this time of year). We also heard and saw several displays of firecrackers lit in front of the church, and I’m still not sure if this is part of a Christmas celebration or just some kids goofing off. 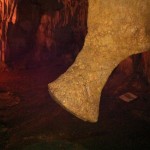 Rock formation in the cave

In Santa Elena, we also explored the caves of Actun Kan. It’s the largest cave I’ve ever been in – huge caverns with dozens of hollow rooms to explore, some with very high ceilings, full of large stalactites and occasionally, bats. Marie loved the caves and wants to go to more. Emily liked it at first, but then got scared and decided it was too dark for her. They gave us two LED flashlights at the entrance, but I found my iPhone4 did a better job than both of them. Unfortunately, it didn’t take very good pictures in the dark, and I forgot to bring my other camera in the cave. But I took a couple passable photos.

Near Santa Elena, we also went to ARCAS Animal Rescue Center. We wanted to volunteer, but you have to commit to a week for that, and we didn’t have the time. But we enjoyed a tour of the facilities and learned more about the animals, how to care for them, and the process of releasing them back into the wild. We also learned more about life as a full time volunteer. They have a beautiful jaguar there, who I guess doesn’t like to get his picture taken, because he tried to attack me through the chain link fence as I was taking his picture! He leaped so quickly and powerfully onto the fence that I jumped back a few feet and… didn’t get the picture. 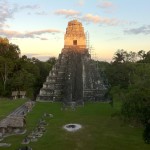 About an hour away from Flores is the most famous landmark in Guatemala, the Mayan ruins of Tikal! What an incredible place! It’s not just a temple or two to look at, but an entire city of over 3,000 structures that are still only partially excavated. The city was probably lived in from as far back as 1000 B.C to 900 A.D. and is surrounded by the thick jungle, made navigable by pleasant walking paths. We saw and heard howler and spider monkeys many times in the thick trees around and above us. We also saw coati, and another animal that looks kind of like a mini tapir. It was a lot of walking, but very fun and interesting to explore. And the views from Temple IV are exquisite! There is also a small museum including some of the artifacts found at the ruins.

From Flores to Cobán to Antigua 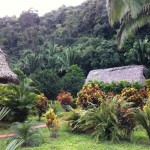 We had originally planned on spending our entire trip in the Flores area, but decided that we’d like to see the colonial town of Antigua, near Guatemala City. We also decided to take an alternate route there, through Cobán, just for a change of scenery. The drive from Flores to Cobán is beautiful. There are lots of steep hills covered in green trees and leaves, making me wonder if there is yet another Mayan temple buried underneath one of them. To get to Cobán we also had to cross a river on a little wooden ferry. It wasn’t a big deal at all – just drive on, pay about 80 cents, then drive off.

There weren’t many nice towns along the route. Most looked like pretty run down places. But we enjoyed seeing the town women and children in colorful clothing walking on the roads carrying everything on their heads from baskets to banana bunches. And Guatemalan kids are so cute! They always gave us the sweetest smiles. Once or twice we saw a kid running completely naked through the street.

The last half of the drive to Cobán was pretty winding, and most of us got a little car sick. We were pleased, however, to find a lovely French restaurant surrounded by green mountains and well cared for gardens. It was unexpected, and the perfect place to stop for lunch.

We did find a good hotel to stay at in Cobán, La Posada (about $50), but it was really cold at night! Okay, 45 degrees may not seem cold if you’re used to snow in the winter, but all we had were short sleeve shirts! We weren’t expecting such cold weather in Guatemala. Fortunately, there were lots of blankets.

We headed out early the next morning for Antigua, and about an hour outside of Guatemala City, our rental car blew a tire! It was an unexpected adventure. We stopped to change it at a spot with lots of garbage on the side of road, including old tires, diapers, and broken bottles. Unfortunately, this was a fairly common sight along the highway. But I was glad I was actually able to get the old tire off (with some karate kicks) and get the spare on without any major trouble. It only took me about 20 minutes! We finally arrived in Antigua that night and found a lovely hotel called Los Pasos ($103, including breakfast and a wood-burning fireplace in our room).

Antigua is a cute little town built in the 1500’s, then abandoned after one of the three nearby volcanoes erupted, followed by an earthquake, causing the capital of Guatemala to be moved to the present day Guatemala city. It’s a very colonial Catholic town, dotted with churches and cathedrals, some of them in ruin, providing a glimpse into the European architecture of the time. We had an enjoyable stroll on the town’s cobblestone streets, explored one of the churches, a museum, and some ruins, had some good meals there, and even got Jen and the girls some new dresses for Christmas. We wished we could have spent more time in Antigua. It was a really charming city.

For our final night, Gabriela, who I mentioned earlier, took time out of her day to come meet us at the 5-star Vista Real hotel in order to get us an incredible rate of only $54/night! This was the most luxurious and charming hotel we’ve ever stayed in, topping even the Marriots and Hiltons I’ve been to for business conferences. I usually don’t like staying at super fancy hotels because I feel like I’m being nickel and dimed for everything, including ridiculous costs to use the Internet. This hotel, however, was very affordable (including free wifi), had an incredible restaurant with world class service, and was just beautiful throughout. I would definitely like to stay there again, especially at that rate.

Hopefully, one day, we’ll make it back to Guatemala and enjoy more of its culture and heritage, get to know its people better, and experience some of the other parts we didn’t get the chance to enjoy this time around.

Marie at Temple I

Coming down the stairs

Me on a Mayan Temple

Walking down the Temple stairs

So much to explore

All used to be white