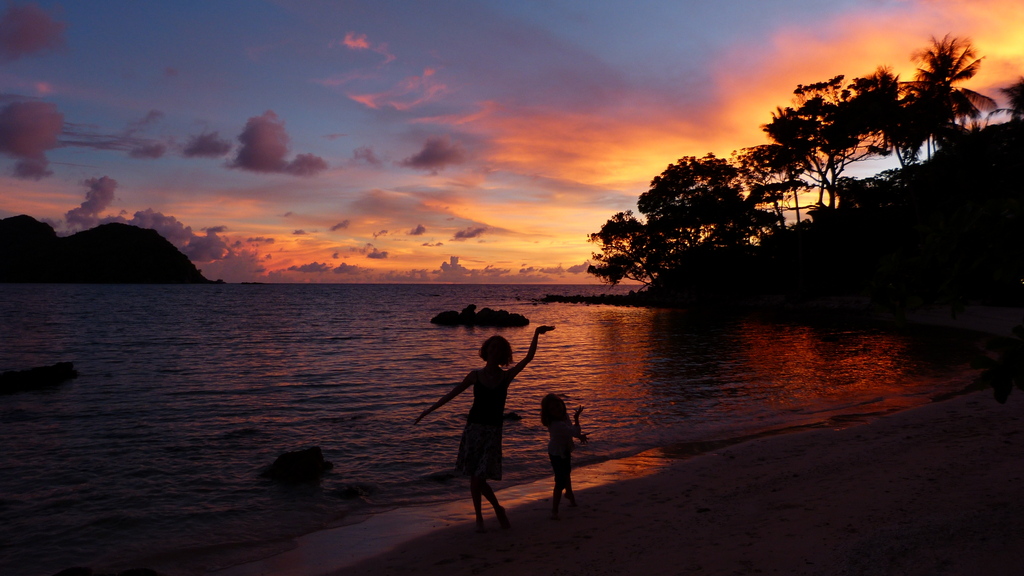 Playing in the Philippines

For the past several years, I’ve employed people in the Philippines to help me run my business, including programmers, customer support staff, marketers, content writers, and virtual assistants. But I had never met any of them in person, or even spoken to them on the phone. All our correspondence was via email or chat, and lately, via managers I’ve hired. I was looking forward to finally meeting the families of the people who have been working so hard to grow my business, and also to see their country with my family.

Programmers and families near Manila

The Philippines allows US citizens a 21 day visa on arrival, and we used all 21 days fully, exploring parts of Manila and the surrounding provinces, Cebu, Palawan / El Nido, and Davao. I was pleasantly surprised by the country and its people.

Even though the Philippines is in Asia, it reminded me more of Latin America. This is probably due mostly to it being a Catholic country and having strong U.S. influence. English is a main language there, as well as Tagalog, and most people were easy to understand. The people were very polite and friendly, and the service we received in most places was superb, as is typical in much of Asia. We were also addressed as “Sir” and “Madam” after almost every sentence.

The larger cities, such as the Makati area in Manila, are clean and modern, with all the shopping and international food you could want. The more rural areas are beautiful and green, and the people are even more relaxed and friendly.

I hadn’t heard much about Filipino food before we arrived, but they do have their own cuisine, and we were very impressed with it. Some of my favorite dishes are sinigang (tamarind soup, which we first had homemade by our friend’s sweet lola (grandmother) in a small town), kare-kare (a curry dish), and lechon (roasted pig, a traditional delicacy we enjoyed with our Davao programming team). In Davao, their mangos and mangosteens are the best I’ve had anywhere! I also tried some new fruit I’d never heard of called “marang” which was delicious! It looks similar to jackfruit on the outside and has a slightly doughy texture on the inside, like durian, but less chewy, and the flavor was sweet and fresh. The Vikings Buffet at the Mall of Asia in Manila was also the best buffet I’ve ever been to, with a huge variety of fresh and delicious food.

Lechon lunch with Davao programmers at a water park

We also enjoyed a few days in the small town of San Ildefonso with our friends Denny & Rachelle, whom we met in Costa Rica. It was great to see them again and catch up, while also getting a taste of what life is like in the provinces. The girls convinced them to roast marshmallows for smores, and take them to a local swimming pool. We enjoyed several meals together, both at home and at restaurants, and they showed us true Filipino hospitality.

We felt safe everywhere we went in the Philippines. This may be due to the ever-present security guards. All entrances to big stores and shopping malls have a metal detector and a guard or two ready to check your bags. Even grocery stores seem to have a guard on every other aisle, which I sometimes found more disconcerting than comforting. I hear there are areas in parts of Mindanao and Manila which are not safe, but we didn’t go there. In Davao, the taxi drivers are even honest and use the meters without argument, and it’s against the law to smoke in any public place except for designated areas, which for the most part, people seem to follow.

Traffic in Manila can be an issue, both land and air traffic, and we missed two flights leaving from Manila because of this, and had to rebook. Besides the traffic, I found it to be an inefficient airport in general, with how it’s laid out. And twice the security tried to take my Pacsafe because it’s made of “wires”. But we talked them into letting us keep it both times (“It’s okay. We always travel with it because we got robbed.”, etc.)

Cebu was a fairly clean and growing city, where we met with one of my programmers and his girlfriend, went glow-in-the-dark miniature golfing, and checked out a local mall.

The Philippines has a wide variety of scenery, from jungle rain forests, to terraced rice fields in Baguio, to white sand beaches surrounded by blue water and limestone cliffs in Palawan. We flew into Palawan through Puerto Princesa, where we spent an evening on the beach walk, riding bikes and tricycles, eating street food, and chatting with the locals.

The next day was a 5-hour winding van ride to El Nido, followed by us realizing that most of the hotels in the area were already booked. Guess we should have planned ahead for this one. However, we were able to secure accommodations at the most luxurious resort in the area, The El Nido Resort at Pangulasian island. We really splurged staying here, but the service and location were phenomenal! From there we toured around to several islands, went kayaking, snorkeling with sharks (I saw a black tip reef shark!), reading in the library, playing at the beach, and relaxing in the beautiful atmosphere of these islands. We felt very well taken care of.

Look at this water! Yes, it really was that blue.

The nightly sunsets were spectacular, too. This photo was taken right outside our villa.

While in Davao, we also celebrated Aysia’s second birthday with a donut from Krispy Kreme, balloons, a new stuffed animal, a dog show, a movie at the theater, and her own luggage, which she is excited to be able to pull on her own.

I have to say that it feels good to know that the business I’ve created is now helping support over 20 individuals and their families in the US, Philippines, and elsewhere, to live and work wherever they choose. And I can see a lot of good reasons to choose the Philippines.

Here are some video clips and additional pictures I took during our time in the Philippines.

Programmers and families near Manila

5 Tips for Hiring a Programmer