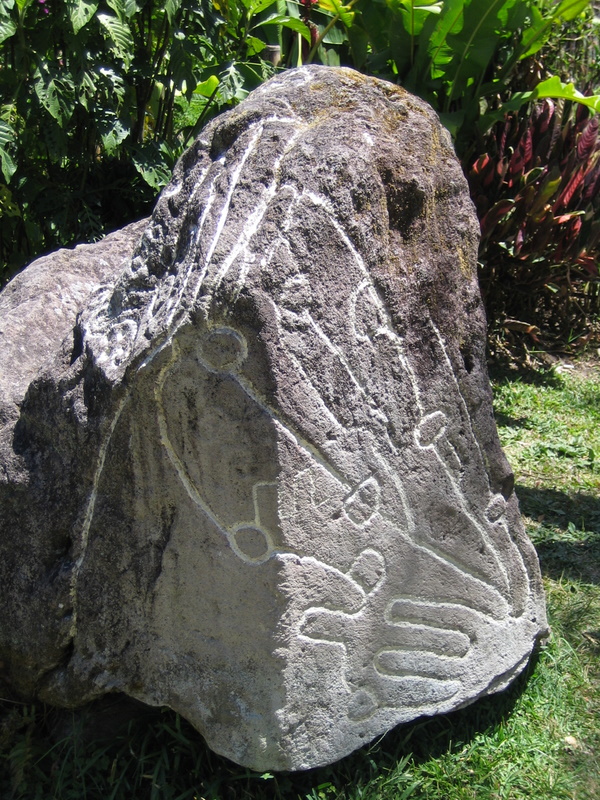 Today we went to an archeological site called Sitio Barriles, near Volcan, which has unearthed hundreds of artifacts from the time roughly between 2000 B.C and 300 A.D.

Rock with an ancient map

We saw a large rock with a map (supposedly) painted on it. We were told that the spirals probably represented mountains or volcanoes, and circles represented cities, as it described local geography from the Caribbean to the Pacific sides. We also saw magnetic rocks that change the direction of a compass if you place one nearby. There was a rock that only shows its design when wet, and many pots and other types of stones used for grinding food and medicine. Remains have also been found of a temple, tombs, and gold.

We were particularly interested in these artifacts because of our belief in the Book of Mormon, which talks of civilizations living during these periods in the Americas, although it’s difficult to determine if there is any correlation.

We also learned that because of the acidity of the soil, bones will disintegrate within 10 years, leaving no trace. However, some of the pots found contained human ashes, which were analyzed to be from around 800 B.C. Also, many of the statues have faces both Asian and African in appearance. One life-size statue (now at a museum in Panama City) shows an African man on top of an Asian-looking man’s shoulders. They think a volcano may have destroyed this people around 300 A.D., but they’re not sure.

Giant lemons (1 qt of juice each)

It was a very interesting visit, and we enjoyed it a lot. It is mostly outside, surrounded by beautiful gardens full of plants and birds. We saw a lemon tree with giant lemons that can each produce a quart of juice! I also liked the large Traveler’s Palm, whose ends always point north and south. There were also pink bananas from the Philippines that peel themselves. They even had Papyrus, which the Egyptians used to write on. She gave us a piece to take home. When it dries in a couple days we can peel it and write on it, and the writing will never fade way. On the way out, we also saw several Tanagers Red Winged Black Birds which have a striking bright red color – beautiful!

Emily and Marie riding a horse

The owner of the museum also had a horse which was tied to a tree, and the girls asked if they could ride it. Our guide said she’d ask her husband if he could take them for a ride, and he was glad to. Emily was so excited to finally get to ride a horse! Marie was a little scared and wanted to get off, but later chose to ride with Mommy. He walked them around the property a few times and they loved it. We were glad Emily got to ride a horse, and again impressed with Panamanian hospitality.

Small restaurant we ate at in Caizan under $2/meal

After we finished there, we continued on the road to Caizan, which leads into Costa Rica. There are some beautiful vistas along this road. We drove all the way to the small town of Caizan and decided to have lunch there at what we could hardly tell was a restaurant. It was basically run by a woman and her daughter, in part of their house (I think). She had no menu, and basically just asked what we liked and if she had the ingredients, she’d make it. Jen and I had some rice and soup (very good), and the girls had french fries (which she made right from the potato), fried chicken, and hojaldres (fried bread – kind of like a scone – very good). It was a lot of food, and none of us could finish it all. But what amazed us most was the price – $7.80 for all of us, so less than $2/meal. Amazing. That’s eating like a Panamanian. :)

Then we headed back to Volcan and browsed through some of the stores. We got some ice cream cones for 25 cents each, which we enjoyed as they quickly melted. We just had left-overs for dinner that night. It was a really fun day.

Giant lemons (1 qt of juice each)

Stone only shows writings when wet

Pink bananas from the Philippines

Emily and Marie pumping a well

Rock with an ancient map

View on the road to Caizan

On the road to Caizan

Small restaurant we ate at in Caizan under $2/meal

Brandon and the girls after ice cream

River that destroyed a road

Emily and Marie riding a horse

The Nostalgia of Coming Home

To all the Mormons – I’m Sorry