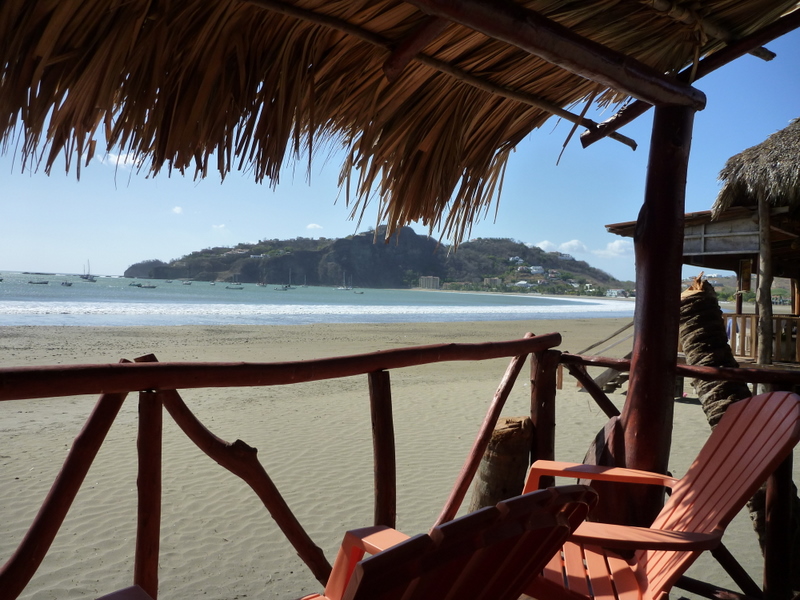 We just got back last night from our first trip to Nicaragua. We spent three days in the small coastal town of San Juan del Sur. Every 90 days, we’re “forced” to take a vacation outside of Costa Rica to renew our tourist visas, and since Nicaragua is the closest country to where we’re living, we decided to check it out.

In my last post, I wrote about crossing the border to Nicaragua. The border is about 4-5 hours by car from Grecia. It was a long drive, especially for the kids. They were pretty good for the most part, though. We made up some fun word games to play in the car, and finally got Emily some motion sickness medicine which seemed to work great for her. 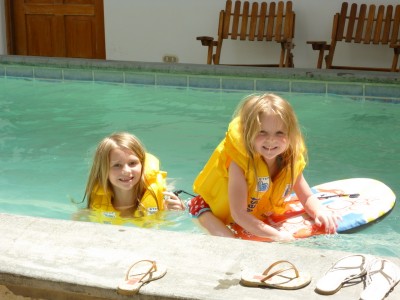 Fun in the pool

We drove straight to the border, without even stopping for lunch (just had oatmeal cookies in the car), but were delayed for about 45 minutes by an accident between a semi-truck and an SUV. Not pretty. There is actually a border that’s only about 3 hours away, but if we went that way, we wouldn’t get to stay by the ocean, and we thought we’d like that, so we took the longer route.

It turns out that the kids didn’t want to play at the beach at all anyway, and wouldn’t even get in the water because they were afraid of the waves. The water was kind of cold anyway. So we skipped the beach. Oh well.

San Juan del Sur is about 45 minutes from the Costa Rica border. Full of colorfully painted houses, and lots of restaurants, it’s definitely a tourist town (many people trying to sell you sunglasses and pottery while you’re eating dinner), but is small and completely walkable. It’s also very hot, and very dry this time of year. Fortunately, the hotel we stayed at (actually a cheap vacation rental inside Hotel Villa Isabella that we found on www.vrbo.com) had a swimming pool, which we took advantage of for several hours each day. Marie especially loved the pool, but all of us played in it for quite a while. 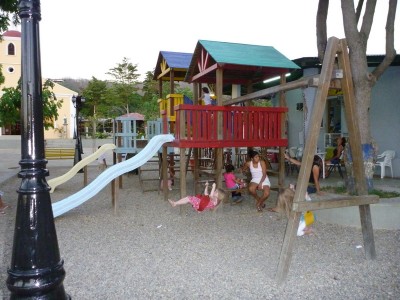 Fun at the playground

Because we didn’t have our car (see my last post), and were a little tired because of driving all the day before, we didn’t go on any excursions. We basically just walked around town, ate at restaurants, played at the playground, and watched TV in the hotel. But we had a great time being together and relaxing.

The kids are now big fans of Tom & Jerry and Scooby-do, which seem to have lots of reruns playing here – in Spanish, of course. Although after watching a few Scooby-do shows, the girls kept telling the characters in the TV to “just take off their masks” right from the start. They could see through those phony monster disguises, and had already figured out that that’s how every Scooby-do show ends.

Overall, we had a great time in San Juan del Sur. I wasn’t expecting it to be so dry, but I guess being the dry season, it really takes away the green. Our taxi driver was a man of integrity, and came to pick us up around 7:00AM to go to back to the border to avoid the longer lines that usually come a little later in the day. We made it through without too much trouble, and were so glad to get back in our own car! We also had the whole day to explore, so decided to take a few detours on the way back to see really amazing things, which I will write about in another post.

Crossing the Border to Nicaragua from Costa Rica