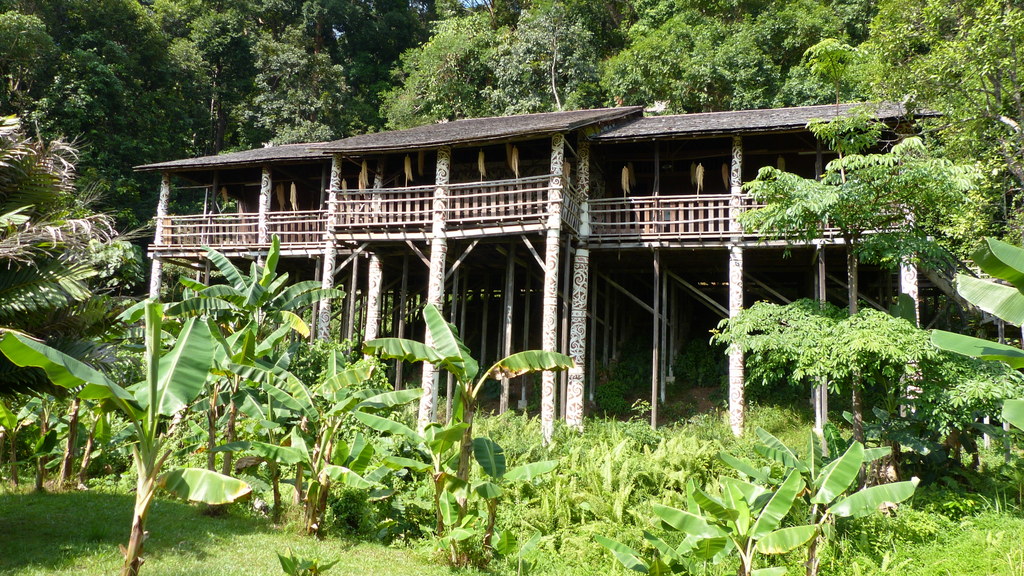 We had already spent more than three months in peninsular Malaysia, but we’d heard that Malaysian Borneo was completely different.  And in some ways, it was different, with the numerous indigenous cultures that are prevalent, and being closer to many national parks. However, on our 10 day visa run there, we still found it to be distinctly Malaysian, with some of the same quirks as the peninsular side. They’re just small things, but they’re quirks we’ve experienced everywhere we’ve been in Malaysia. For example:

That said, Kuching was a lovely city for the most part and we enjoyed most of our time there. Unfortunately, on the second night, Jen and Marie got very sick. Marie vomited. Jen felt nauseous and wasn’t feeling up to going anywhere, so we spent the next day in the hotel. As the symptoms were mostly digestive, we thought it might have been caused by something they ate. But then they got fevers and their bodies started to ache. They got chills, a painful sinus headache and a runny nose. And a few days later, I caught the same disease, and Emily and Aysia followed shortly after. It felt like a very bad case of the flu, and was quite painful.

After a few days, some of our symptoms got bad enough we started wanting medication. We realized if it were a viral infection, a doctor couldn’t do anything for us. And if it were a bacterial infection, he would just prescribe antibiotics, which we like to avoid where possible. There was some paracetemol (Tylenol) available at the house, but it wasn’t broken down into kids portions and we didn’t really want to take it anyway (did you know Tylenol is completely synthetic and made from coal tar?). We had a few essential oils with us, and I’m sure we could have found a Traditional Chinese Medicine clinic if we wanted to go somewhere, but because Jen had mostly recovered by that point, we knew this wasn’t a terminal illness and the rest of us would recover soon as well. So we didn’t take anything and were fine. Isn’t it amazing how quickly our bodies can heal themselves with adequate rest and healthy food?

Still, being sick together didn’t make for the best family vacation. Not only did we miss out on several activities we would have liked to do, we were also in pain, irritable, and impatient with each other. It was more of a struggle than normal to think positive thoughts and enjoy our time. To make things worse, the only Internet we had was on my cell phone, but the reception at the farm house we were staying was so poor that we only got 10-30kbps (when it worked at all). Compare that to the slow 768kb (soon to be 2,000kb!!!) we get in Bali and the 12,000kb we got in Japan. It’s slower than dial-up. So we watched some movies, swatted at mosquitos (and still got bitten), and spent lots of time resting in bed.

Despite the unpleasantries, we tried to enjoy it as much as we could. Just a few days before we got sick, our family came up with a new motto, “Life is for enjoying. That’s the only thing it’s for.” Repeating this to ourselves and each other was a good reminder to make sure we weren’t just going through the motions of life, but actually enjoying the experiences we were having in the moment. I tried using the pain of my sickness as an experiment to see if I could actually “enjoy” the pain in my body by focusing on the sensation of pain itself and feeling it out rather than resenting the pain. And I was able to “enjoy” it to some degree, but it was a constant effort to do so. Fortunately, we all survived the sickness and made it home safely. (Yay!)

So while we were in Kuching for 10 days, we only had about three days where all of us were feeling well enough to go out. In those three days, we still managed to pack in some fun activities.

Us with the dancers

The Sarawak River Cruise was a leisurely and enjoyable way to see some of the major sites of the city, although most were right around the dock. There were some nice photo opportunities, and a short dance performance on the boat as well. Aysia enjoyed walking around the couch in the middle. And Marie made friends with a girl from Germany. After the cruise, we poked in at the cinema and watched “Brave” which was recently released.

The Sarawak Cultural Village gave us a glimpse into the lives of the different indigenous tribes in Sarawak. We got to enter their longhouses and round houses, hear their music, see their dances, and eat their food. Our favorite activity was blowing into a blow pipe to shoot darts about 20 feet away. I actually hit a tin can on my third try! I can see how it would be a useful weapon.

The Semenggoh Wildlife Center provided an opportunity for us to see orangutan in their natural habitat. Many rescued (and now wild) orangutan choose to visit the sanctuary occasionally during the twice daily feedings, and you can watch them swing through the trees to get to their food. Having also visited Orangutan Island on peninsular Malaysia, this one was more of a distance viewing experience, but also seemed more natural for the orangutan as they had much more room and privacy.

The Sarawak Museum was fairly old, but gave us a glimpse into Sarawak’s history, nature, and people. While there, the kids got swarmed by dozens of Muslim students in white hijab who were intrigued by the blonde hair and were all trying to get a better look. They’re all kind of tired of being at the center of attention. We also visited the art museum in the same complex, which had some interesting pieces.

And last but not least, Jennifer and I celebrated our 10th anniversary while in Kuching with a lovely dinner without the kids (we left them in the hotel room with a pizza and just took Aysia with us). It’s amazing how fast time flies, and how each year just gets better than the last.

That was all in the city of Kuching. We also spent 6 days west of Kuching at a farm house, but were sick the entire time so didn’t make it to any of the national parks or caves. Overall, we’re glad we could go on this trip, but we don’t really care to go back. We like it better here in Bali. :)

Enjoy the pictures and videos below.

Us with the dancers