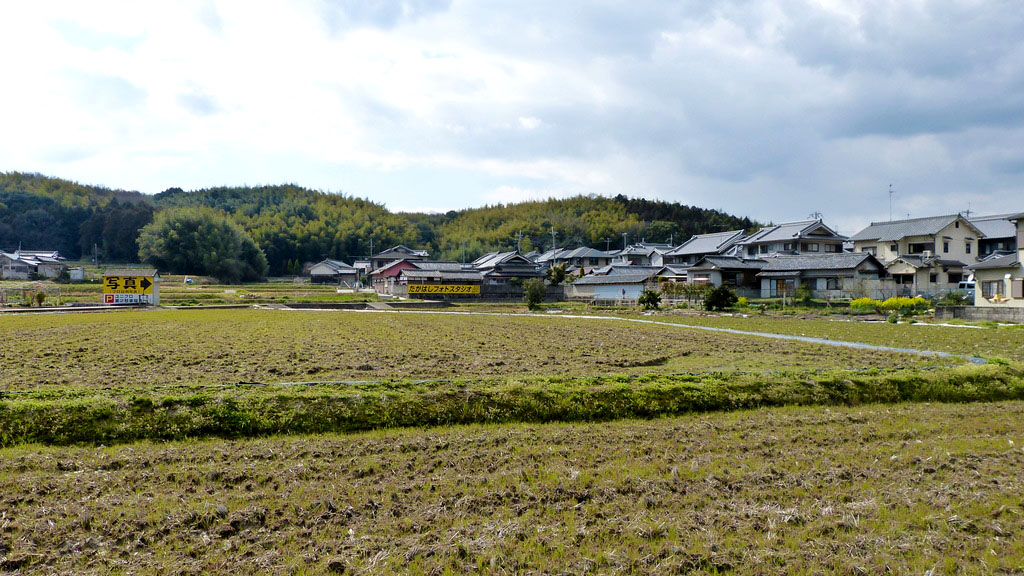 We waited until the last minute to book our hotel in Japan during the cherry blossom season, which isn’t a good idea if you want to have your pick of hotels near the action. Fortunately, we didn’t want to be in the city anyway. We wanted to see what living in the Japanese countryside was like. And we found the perfect place.

Breakfast in the hanare

We’ve been staying in a traditional Japanese house in an older neighborhood called Habikino, about 45 minutes by train from the center of Osaka. The house was dubbed “Kigouya” and was renovated by Lawrence and Tomoko, our amazing hosts and now friends, who have been hosting guests here for over five years. The house is surrounded by rice fields and a bamboo forest, but has plenty of restaurants and convenient shopping nearby.

Bicycles are a popular means of transportation here, and the sidewalks are extra wide to accommodate for them, so we wanted to explore the town by bike. Lawrence had several bikes for Jen and me to use, and also helped us find some used bikes for the kids. Many Japanese throw away perfectly good quality items, from almost new electronics to used-once barbecues, and fortunately for us, even bicycles. At what would be considered a garbage dump by the Japanese, we bought two nice bikes for the kids for just 1,000 yen each (about $12 USD).

We’re enjoying sleeping in futons on the hand-made rice tatami mats, the rooms divided only by sliding shoji doors which, when opened, reveal the sculpted trees in the garden. There’s also a fancy Japanese toilet here that washes, massages, and dries your behind after doing your business. Oh yes, and it also opens for you when you walk in the room — seat pre-heated — and automatically closes and flushes when you get up to leave (and turns the lights on and off for you too). Anal hygiene has never been more advanced. Amazingly, we’ve seen similar toilets in various public restrooms here, too.

Like most of Japan, Habikino is a clean, safe and efficient town. Most people don’t lock their doors, if they even have locks. People generally pick up their trash and carry their garbage home with them, rather than leave it on the road. Children take the trains to and from school by themselves every day. And of course the trains are always perfectly on time.

We’ve been enjoying Japan’s unique culture and food, too. From the moment we saw two sumo wrestlers buying sweets at a gift shop in the airport, we have continued to experience things in Japan that exist nowhere else in the world. Emily and Jen are especially excited to be here and can’t stop talking about how much they love it. The food here has been incredible as well. We’ve eaten all our favorites, sushi, katsudon, gyouza, ramen, yakisoba, udon, okonomiyaki, curry rice, gyuudon, and more. We probably don’t eat quite as healthy here as we do in other places because most of the food we’ve been cooking is pre-packaged and ready-made for quick and easy serving. Buying fresh fruits and vegetables here is extremely expensive. There are also an abundance of new treats and snacks to try, and we’ve been indulging a bit in that.

Daddy and Baby in the blossoms

One of the main reasons we decided to come to Japan this time of year was to see the sakura (cherry blossoms) which Japan is so famous for. So far, thanks to Lawrence, we’ve been to two “o-hanami” (flower watching) parties with some new friends, and will attend more later this week. We also had a little chocolate egg hunt on Easter Sunday. Flowering cherry trees are everywhere, but it’s especially beautiful to see so many in one place, in a park or near a river, and to sit under them and enjoy a picnic with friends. Our first week here was really cold for us, but it warmed up just in time to see the blossoms.

We’ve also taken a few day trips, including a visit to Nara, the capital of ancient Japan, where the kids enjoyed feeding the deer that roamed the park. There, we saw todai-ji temple, the largest wooden building in the world housing the largest bronze Buddha in the world. We also visited Osaka castle, but were disappointed that the inside has been turned into a modern museum. Still, it was interesting to learn about what it used to be like, and the grounds of the castle were spectacular, with more blossoming cherry trees, displays of bonsai in the front, and a very large children’s playground.

We’re taking this trip as it comes so aren’t really sure what we’ll do next, but we’re considering a short trip to nearby Kyoto, and will also be visiting an onsen with our hosts. In the mean time, we’ll keep doing our best to soak in Japan, trying not to get too distracted by the 12 mbps Internet connection here (compared to our 768kb connection in Bali). Not an easy challenge for us computer lovers!

Breakfast in the hanare

Daddy and Baby in the blossoms