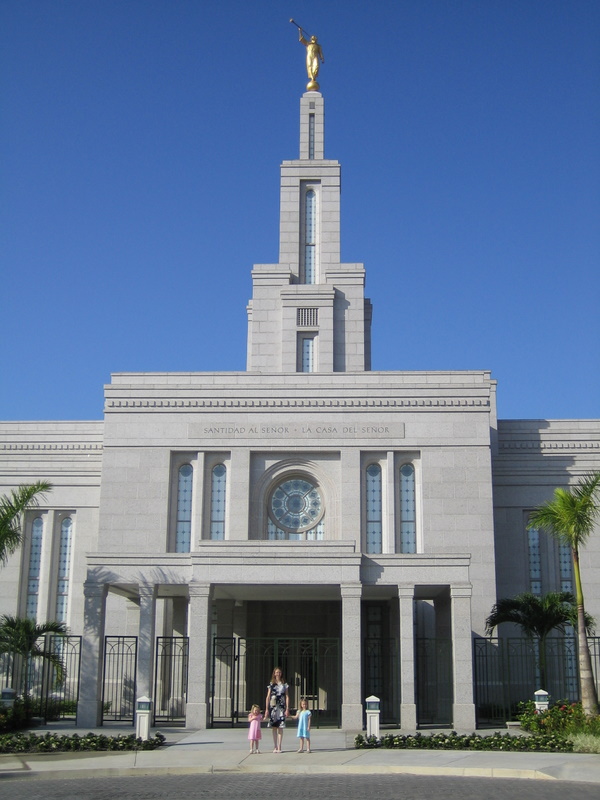 Today was a lot of fun. We went to church in the morning. I had printed out a paper with a map and address of the church before we left home, and we gave it to the taxi driver. We also handed him a map and picture of the Temple, which we thought would be near the church. He took us to the Temple, and there was a church there which started at 9:30am.  This was only about 8 minutes away by taxi, but we later realized there was a closer church almost within walking distance of our hotel, which I must have overlooked. But we’re so glad we went to this one!

Before I tell you about our experience at church, I want to tell you a little bit about driving in Panama City. It’s crazy!! First, no one uses maps (including taxi drivers). They’re pretty worthless in the city because people don’t find places based on the address, but on what it’s close to, or directions. For example, the official address of the church we planned on attending is “In front of the statue of Dr. Arias”. There’s no number, no street, and many streets don’t have names at all. And if they do, they change a lot, or have several names. Obviously, this makes it difficult to navigate in the city, so a knowledgeable driver is essential.

So far, we haven’t had much trouble getting around, although the hotel we’re staying at is fairly new, so most taxi drivers have had to do a bit of trial and error (or calling) to find it, but they eventually do. Taxi rides cost about $1-1.25/person, so usually $4-5 for anywhere we want to go that’s reasonably close. And tips are included in the pre-negotiated amount (before you get in the car).

So, how was church? Alright. First, we arrived a bit early so had time to walk around the temple grounds a bit which are absolutely gorgeous! Not just because of the perfect weather, but it’s the most well taken care of place I’ve seen so far in Panama. The Temple is beautiful, as well as the church, which was recently modeled. The woodwork and tile in the church is breathtaking – not just in the chapel, but in the hallways, doors, and everywhere.

This was also one of the most culturally and linguistically diverse wards I’ve ever been in. It was done in half-Spanish, half-English, and consisted of people of Panamanian, American/European, and African descent, among others. Many people seemed bi-lingual, and the ones who weren’t (including me) wore headsets so the parts that weren’t done in your language could be translated for you. For example, today there was a confirmation, which was done in English. Hymns were sung in Spanish. The sacrament prayers were done in English. All the ward business, announcements, and other prayers were in Spanish. It was fast and testimony meeting, the languages varied by the speaker. Sunday school was taught in English, and Elder’s quorum/Relief Society was in Spanish. It was really cool!

The people were so friendly, and Emily and Marie really enjoyed primary. The primary sang most songs in English, but did start to learn “How Firm a Foundation” in Spanish. It was neat to hear the testimonies of these people, which are very strong. Most are converts and each has a great story to tell, and they are so grateful for a Temple which is now so close to them (it was dedicated last summer).

After church, we visited for a while, then started walking to the main road to catch a taxi, when a sweet member family with five kids offerred us a ride back to our hotel. They both spoke perfect English. He was American (I believe), raised in Canada, and is a business consultant, and she is Panamian, and sells real estate.

After church, we took a long nap. Marie fell right asleep, but Emily was bored out of her mind the whole time. We finally let her go play outside, until she was bored of that. Then she played on the little computer for a while. Jen and I tried to sleep (we had gone to bed pretty late the night before and were tired).

After our nap, we went out to dinner (at the Amador Causeway again) at a nice restaurant called “Bucaneros”. We had fresh clams, and a delicious salmon fettucini pasta dish. It was fantastic! The girls had a cheese spaghetti and loved it. Then we walked a little ways along the causeway, with the lights from the ships and the city (and the stars) shining on us. We stopped at a fruit stand and got a smoothie (I picked a combination of pinneapple/orange/guava) – yum! Jen had passion fruit. The girls had ice cream (Emily – chocolate, and Marie – pink, like usual). :)

So that was our day. Tomorrow, we’re planning on going to Casco Viejo (old town), and to see the Panama Canal. There’s so much to do in Panama city, we’re still playing “tourist”, and loving it. :)