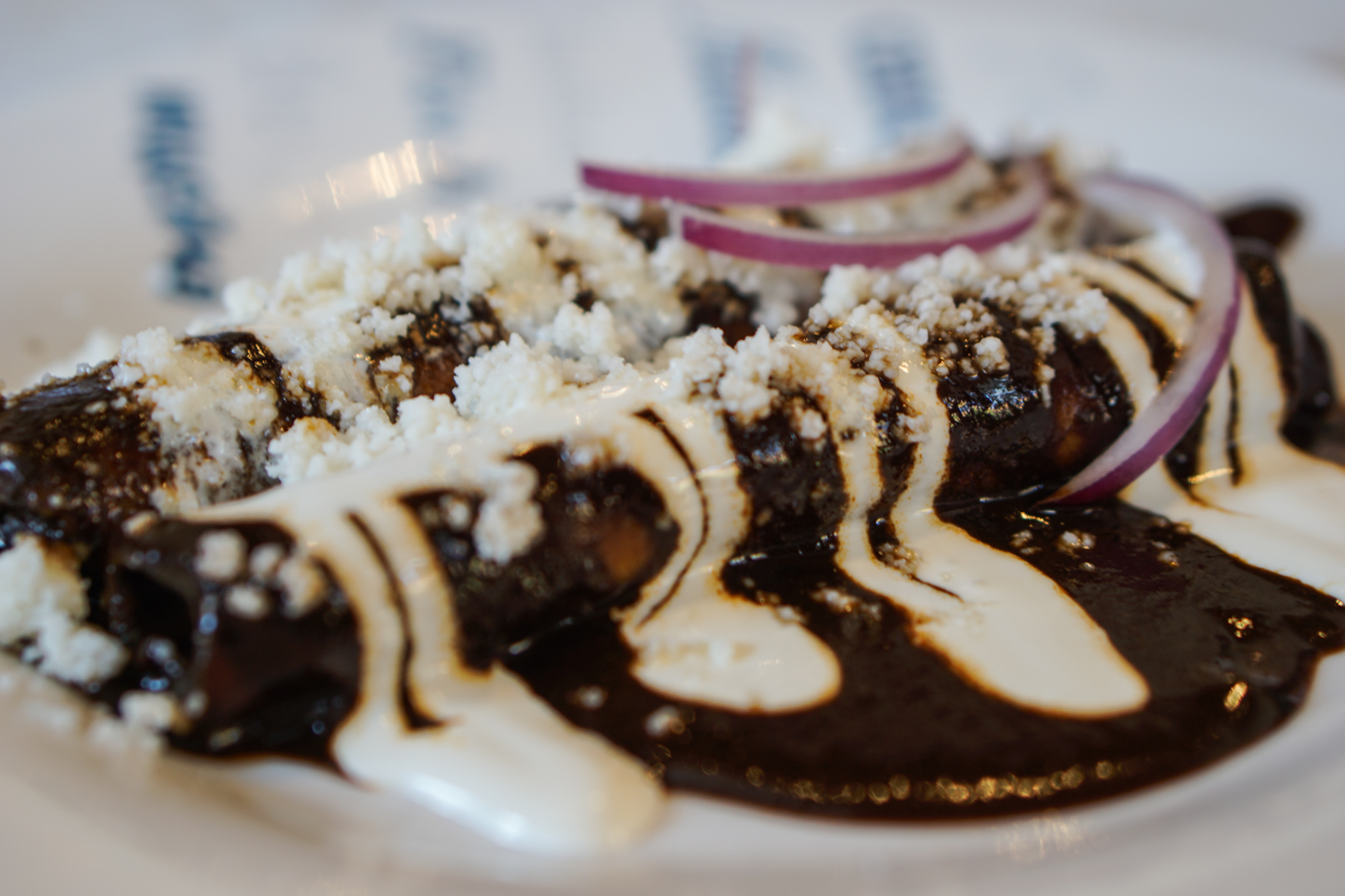 One of our best-loved things about traveling to so many different places has been experiencing the culinary delights available in each one. We’ve been thoroughly enjoying Mexican cuisine ever since we first arrived in this festive country a couple of weeks ago, and it’s certainly one of our favorites! So, we thought we’d look into savoring a food tour while we’re here, and we enjoyed such a lovely one on Sunday of this week, with Taste of San Miguel Food Tours, beginning at noon and lasting until about 4:30pm.

Vail, our tour guide, was fun, engaging, personable, and informative. We learned so many interesting things about the food, restaurants, buildings, and history of San Miguel, as well as many great tips for things to do and places to see in the area. She was also skilled at involving our children throughout the tour; holding their attention, fueling their excitement, and appealing to their curiosity. 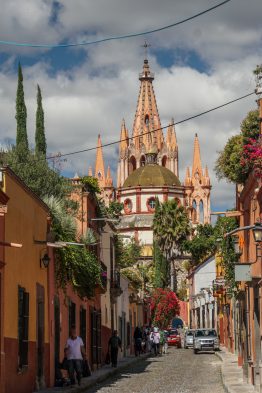 The food tour destinations were all within easy walking distance of each other, and nestled within the colorful and very picturesque town of San Miguel de Allende. We met up in the original town square of San Miguel and Vail showed us the laundry washing stations there, where the townspeople used to come and wash their clothes, and occasionally even still do! 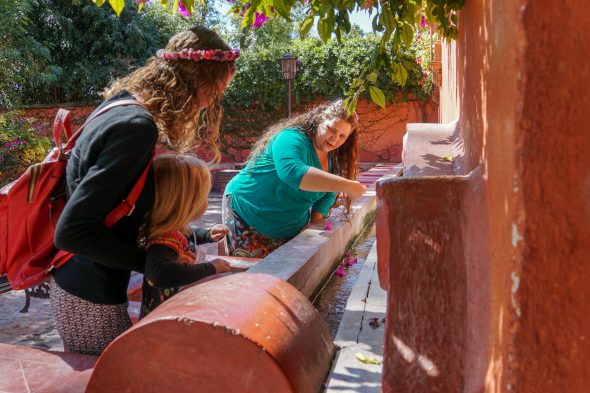 Vail showing us the water trough and basins in the old town center where locals used to (and sometimes still do) wash clothes and children, in San Miguel de Allende, Mexico

First off, we went to the restaurant, La Parada (meaning, the bus stop), with a really nice creative atmosphere and decor. It is a Peruvian restaurant started by a woman, Alexandra Gutt, who worked as a chef around the world before opening up her own restaurant here, just a few years ago. We sampled her “Leche de Tigre,” which is the Peruvian name for the citrus-based marinade that cures the seafood in a ceviche. We each received a serving of the house ceviche, with white fish, mangoes, corn, and toasted coconut, along with a really good triangle-shaped crisp, which tasted sweet with a hint of cinnamon. It’s worth mentioning that Brandon feels it is the best ceviche he has ever tried, and on my part, I would have to agree! 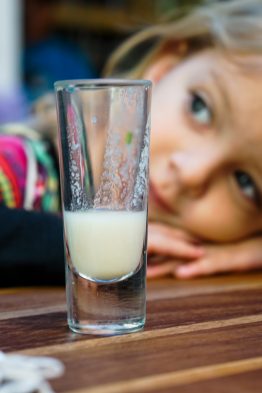 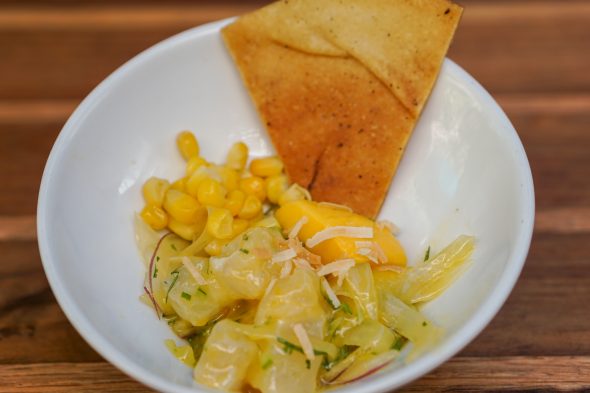 The best ceviche we’ve ever had! Even included mango and coconut! At La Parada restaurant in San Miguel de Allende, Mexico

Our second stop on the tour was the restaurant, La Casa del Diezmo, located in a historic building that was originally dedicated to the collection of the tithe, which the villagers paid to the Catholic Church. This restaurant features traditional Yucatecan cuisine, which is a mix of Hispanic and Mayan culture; they served us a crispy corn tortilla topped with shredded slow-roasted suckling pig, marinated in a strong citrus juice and seasoned with achiote (annatto seed), which gives it a beautiful orange color, and they added some red pickled onions on top. There were also additional toppings on the side, such as tomatillo sauce, fresh Mexican salsa, and a spicy pepper sauce. This was my favorite dish of the food tour, and that’s saying a lot, because everything we tried was absolutely amazing! They call this dish, conchinita pibil, or puerco pibil, and I read that it’s a recurring element in the movie, Once Upon a Time in Mexico. The director, Robert Rodriquez, also includes the recipe and demonstrates how to prepare it in the special features section of the DVD! Yes, it’s that good. 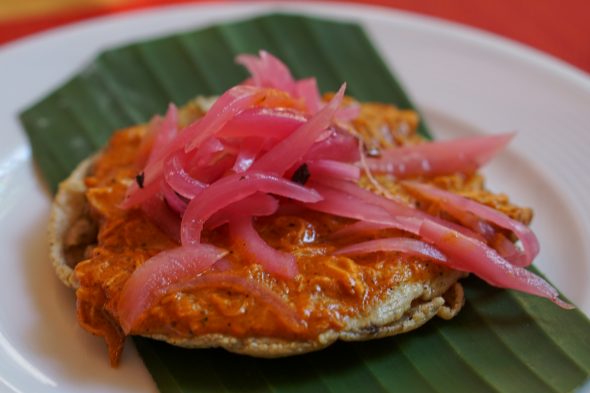 This was probably our favorite dish on the food tour. “Panuchos de Conchinita Pibil,” at La Casa del Diezmo restaurant in San Miguel

We took a stroll through their herb garden before trying some fresh corn tortillas, the best I’ve ever tasted, which were made on the spot, by a woman right inside the entrance to the restaurant. 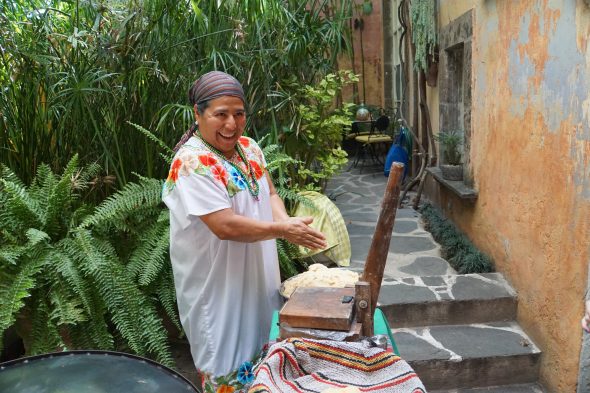 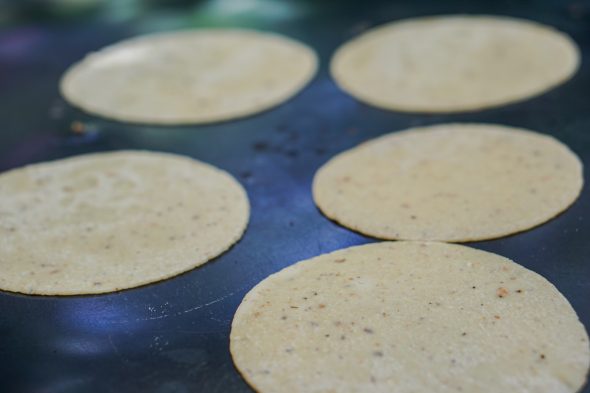 Moving along our route, we arrived at La Cocina, Café del Viajero, where we enjoyed eating in a special seating area directly in the kitchen, around the counter where they were making the food. They served us some Oaxacan mole negro (black mole) cheese enmoladas, with the crumbly Mexican cheese, and some cream drizzled over the top. Wow, what an amazing flavor! 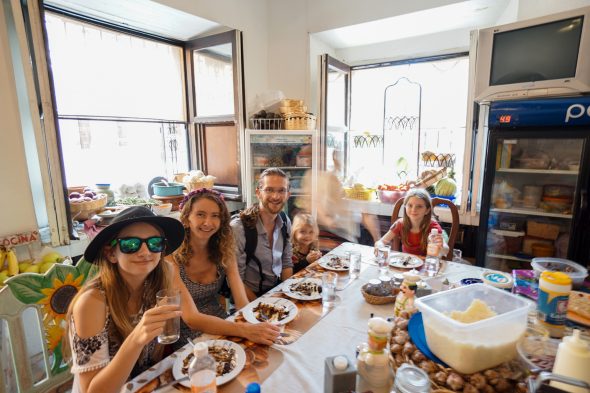 Oaxacan moles can have over 30 ingredients, and some even include chocolate (as ours did), which is added at the end of cooking. Other ingredients can include chili pepper, black pepper, achiote, guaje, cumin, cloves, anise, tomatoes, tomatillos, garlic, sesame seeds, dried fruit, hoja santa, onions, nuts, and many others. Mole takes a lot of time and labor to prepare, as the numerous ingredients are roasted and ground into a fine powder or paste, which can take a full day to accomplish by hand. They also must peel and deseed the many peppers that go into the mole. The powder or paste is mixed with water or broth and simmered until it is aromatic and very thick. It is prepared in a heavy clay cauldron and stirred almost constantly to prevent burning. Can you imagine going through all that work, only to accidentally burn the mole during cooking! Yikes! There are as many varieties of mole as there are families who make it, and the recipes are handed down through the generations. Preparation of mole is typically reserved for special events and made in large batches. 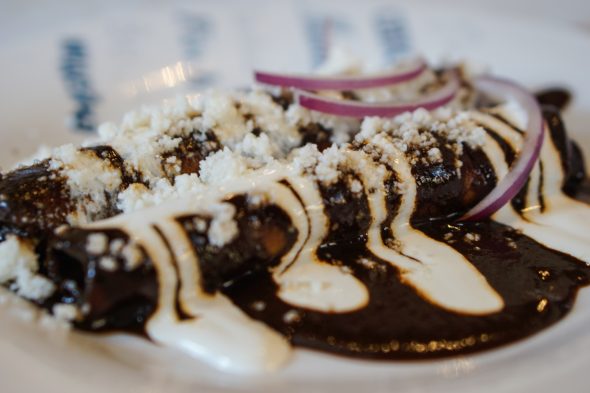 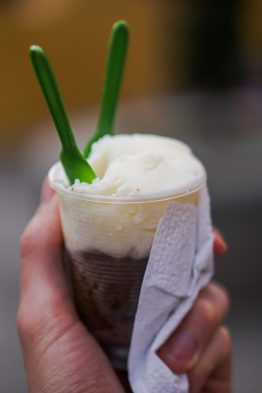 Up next, we visited the restaurant, Los Milagros, and tried their tasty tortilla soup with add-ins of avocado, cheese, yogurt, and fried pig skin (chicharrones). There was even some live music being performed here by a duet of flamenco-style guitarists! 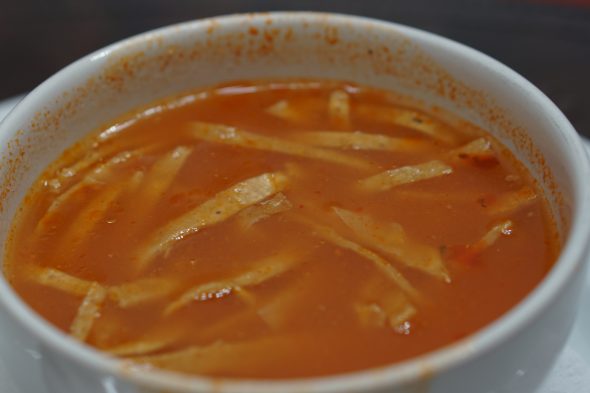 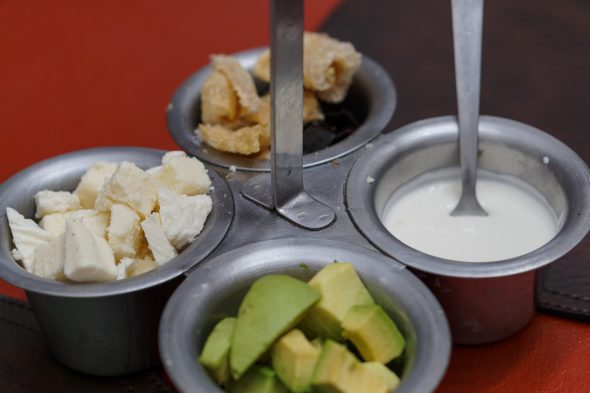 The restaurant name translates to, “the miracles”, and during our visit, Vail showed us her collection of miracle charms. She explained that the people sometimes pin these little metal charms to the clothing of saint statues; the charm used depends on what kind of blessing/miracle may be needed in their life at the time. For example, they would use an arm charm if they were trying to heal from an arm injury; or an animal charm, if one of their animals they relied upon became sick; or a house charm, if their house became damaged by a natural disaster, etc. Nowadays, they even have things like computer charms, since people rely so much on modern technology to conduct their business. 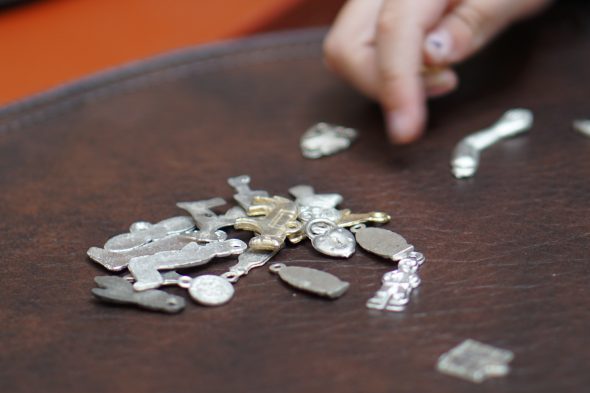 After our soup, we ambled along to a cantina-bar called El Gato Negro, which has been around since 1921, where Brandon and I tried a reposado tequila with lime and salt on the side. It was our first time trying tequila, and surprisingly, Brandon liked it a bit more than I did. We went up to see the view from the rooftop, overlooking the attractive city, which would also be a perfect place to catch the sunset. We learned from our tour guide, that some of the cast members, like Johnny Depp, from the above mentioned movie, Once Upon A Time in Mexico, would come and hang out here between filming. 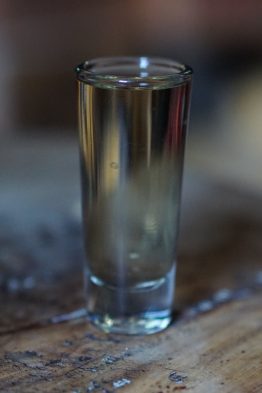 Our first tequila. Strong, but very good with salt and lime, at Gato Negro 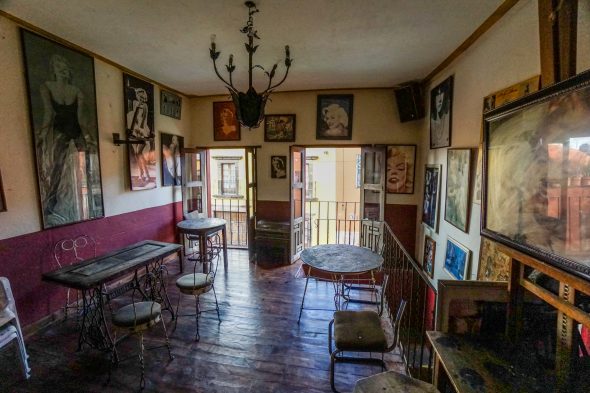 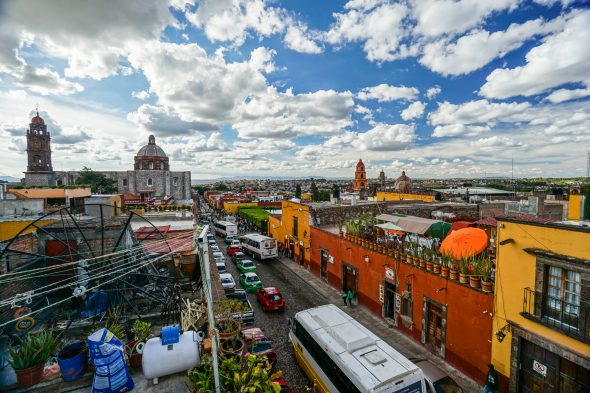 View of San Miguel from the roof of Gato Negro 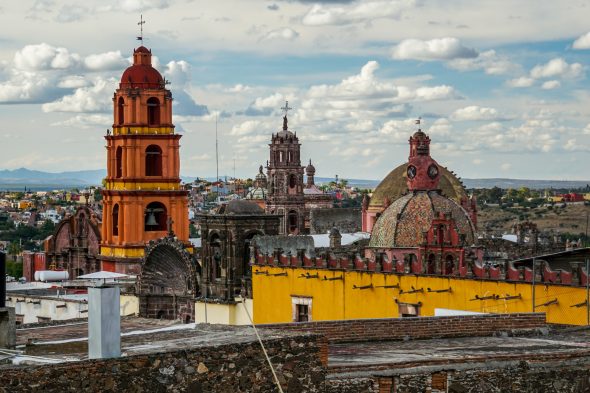 Zoomed in view of some beautiful buildings in San Miguel

Lastly, we went to get some churros with cajeta, and ate them together on a bench in the plaza adjoining the fancy Church of San Francisco, which was built in part using the Spanish Baroque decorative style called Churrigueresco, now a lost art. It is shown in the facade with six columns ascending the entire height of the building, and contrasts the simple block frame of the sides with the many ornate stone carvings in the symmetrical center. 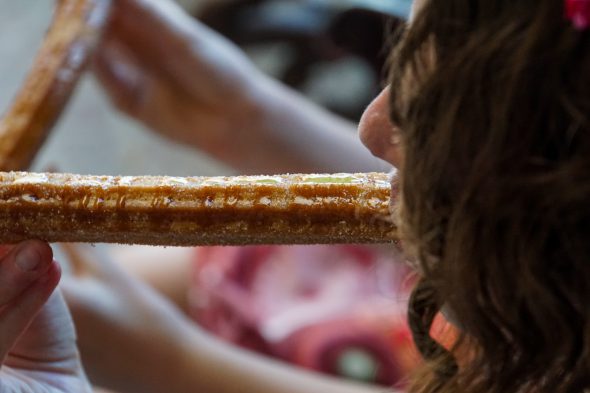 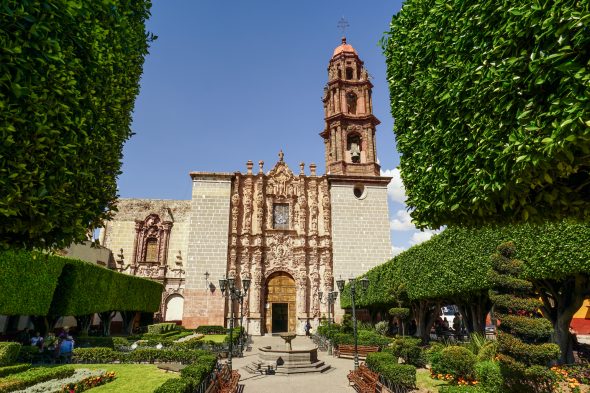 We’ve enjoyed a few food tours in our travels, and hope to enjoy many more, but we will always consider this one a prized favorite!

8 Things To Do In San Miguel de Allende, Mexico